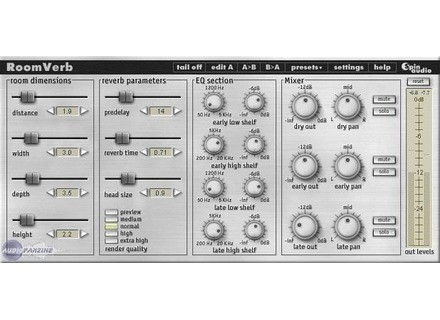 Spin Audio RoomVerb
4
Spin Audio's Roomverb is an in depth reverb and room modeling plug-in. It comes in VST, Direct X, and AU plug-in formats, and when I ran it I did so with the VST version. I'm not running the plug-in any longer ever since I made the switch from Cubase SX on a PC to Pro Tools LE on a Mac a few years ago. In terms of installing the plug-in, I don't remember too much about it since it was a while ago. It shouldn't be a problem for those who have a compatible system. The interface has sections of parameters to set the room dimensions, reverb parameters, and mix levels, and it also has an EQ section. It's pretty in depth as there is a good amount of control available here, making it possible to get a wide array of sounds. A manual shouldn't be necessary for most users, but I don't know anything about it so I can't speak to it's make up.

When I had Cubase SX, I was running the Spin Audio Roomverb plug-in in it on a Hewlett Packard Pavilion dv8000 lap top that had 2 GB of RAM and a 3.0 Ghz processor. This plug-in falls somewhere in between in terms of how fast it as, as it doesn't take up a huge amount of processing power, but does certainly take up some and more than most other plug-ins do. As long as you have a system where you can currently run VST, Direct X, or VU plug-ins comfortably, you shouldn't encounter any performance issues with Roomverb.

While on paper the Spin Audio Roomverb looks amazing because of all it's control, it really ends up falling somewhere in the middle for me. It does have an okay sound quality with a lot of control, but when compared with modern day reverb plug-ins, I don't think that this is even close to the best out there. It will give you a vast array of sounds, but most of them aren't too realistic sounding - again, when compared to the best reverb plug-ins out there. There is definitely a lot that you can do with this plug-in, but I just wish it was a bit more realistic sounding in terms of it's overall depth.
Did you find this review helpful?yesno
»