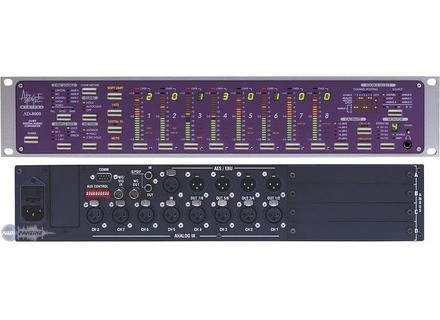 Apogee AD-8000
4
The Apogee Electronics AD-8000 is an 8 channel analog to digital converter for use in recording studios. This is definitely on the older side of AD converters as this was originally put out almost 15 years ago. While it's a little bit outdated, it's not obsolete as it's still a solid converter. However, you can only record with up to a 48 kHz sample rate, so it's not going to be best for high end audio recording, although it is 24 bit. The AD-8000 has eight XLR analog inputs as well as AES/EBU and S/PDIF connections. On the front panel you can monitor the levels of your eight channels as well as control a slew of options, many of which I've never had a need to venture into. It also has a 1/4" input in front for plugging in headphones. This make up is definitely a lot different than the more modern Apogee converters, which are more to the point, but this has the same basic functions.

The Apogee Electronics AD-8000 is one of the earliest analog to digital converters that I've used, and while it's not ideal for modern digital audio recording, it can still be useful when used in the right settings. The main downfall with the AD-8000 is that it only supports up to a 48 kHz sampling rate, so if you're going to want to record at 96 K, this isn't going to be for you. The good news is that it is indeed a solid converter if you're working at 48 kHz and a 24 bit rate and also can be had on the cheap since it's pretty outdated at this point. I'd probably only recommend this if you're using your DAW for mostly non-musical purposes or already can only record at 48 K due to your interface. If you're putting together a professional recording studio, this isn't going to work however due to this lack of options in sampling rate. I'd be nice to have as an extra, but not a main converter. If this won't work for you, I'd check out the newer Apogee stuff as they're pretty much the best converters you can get.

Bought secondhand in the U.S. via internet, even with the port and import fees is far below the "side" secondhand findable in France, especially since I sold them without any trouble optional cards which I did not need (between 90 and 150 euros depending on model).
Used in studio for six months, it gives me the converter's most affordable range APOGEE into 8 channels on the second hand market.
ON still find a few studios in beautiful (the "standard" until 2004 ...).
Used behind the preamp, output routed in a tascam dm TDIF in 4800 and recovered in the computer via the FW card dedicated to the mixer.
Ergonomics for it to top everything at hand with the facade, view meter giants (not to practice when the nose of the beast ... you know right away if it clipped input and how many times ...).
Negatives:
- A bit noisy fan ...
- Prohibitive cost of adat card (not far from 400 euros ... when found ...)
- Limitation 48KHz (but this is a pb??)
- If the weight is in a mobile config

Personally I think it sounds a hell, it says it's very subjective, I did not have compared to other models besides the ones I have (Apogee Rosetta Lucid Audio AD96).