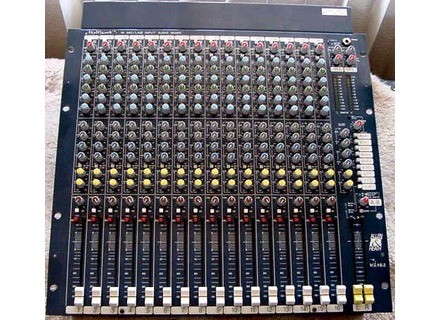 WZ16:2, Analog Mixer from Allen & Heath in the Wizard series.

atmospherik's review (This content has been automatically translated from French)

The warmth of his English in a console "excellent workmanship
Bus no losses of traditional groups
The equalizers are simply amazing and very colorful and carefully pre-set, much higher efficiency than its competitors at Mackie.
The preamps are also released a stamp excellents.Ils pleasant light saturation.

In short, simple and unadorned console unnecessary filling sounds perfect role
Live as effective in the absence and in the studio circuit subgroups is easily offset by the large number of starting aids.

Simply the best in its class.

splosh's review (This content has been automatically translated from French)

To 6, a monitor output jack (balanced), headphone output, two Stereo effect returns. Connections per complte: insert, jack / XLR direct out jack.
Acute 12kHz Equalizer, two paramtriques mdium (hight / low), low 60 hz.
WARNING! there are three version of this table: WZ 16 / 2; WZ2 16 / 2 and WZ3 16 / 2.
In THE FIRST version (mine) no effect Intgr ... snif
the two clearly is the same as in the three ...
I have no tests, therefore,
The photo above REPRESENTATIVES MODEL 2 and the three can be seen here: http://www.allen-heath.com/FR/wz3162.asp

I have put less than ten just because I have not effect on my version, but ...

The console is user friendly and rev sounds like Allen ... there are some who do not like the other who loves. Personally, I find sufficiently neutral and warm, breathless. The qualos are really above the rest of the competitors ... (Kursk off version 1).
When there is a buzz somewhere I'm sure he does not come from the!

I use it for two years (it's a OCCAZ on which I break into small / medium gigs and primarily replicates. It helps me from time to time to save.
The must of this table is its sound quality (excellent components) and cot prarique: you plug, it works ... unless you put the jack into the insert or live out! (Do not laugh, has come ...). To six can grate aisment returns and effects.
I had long sought this because I tried MODEL mackie, Berhinger, Soundcraft and Yamaha never be satisfied and happy with the final rendering.
So actually the price but the quality remains lev is too.
So for me, the choice of taking a OCCAZ t ds ds I could ... I find the three in OCCAZ I would see ...
so that the 10/10 ratio mainly its competitors.

Allen & Heath WZ16:2
5
This console Allen & Heath is in addition to being very simple and lgante, it is of quality and versatille the extreme. I had a chance to work with it and believe me, on all the locations and type of events to which I have done, I've never had a problem. She is doing well thanks trs's 19''rack. Also with 16 mono inputs, 1 output main monitor, and it's effects auxilires 6 Intgr this small compact console is adapted vnements all. The only thing I dislike is that there are no channels with Stereo fader. Otherwise it has the basic inputs with direct outs. I recommend everyone who is a small band or are in the rental equipment!

The configuation is normal therefore those with a base will have no trouble understanding it the first time. For those with a little more difficulty the manual is very simple to use.

The sparateur frequency drives or EQ, Russian test 100%. Particulirement it blocks out the low frequency.

I utlise for 1 year and I have no complaints. I love everything about this console particulirement but also its size. I like less the fact that there is no input with Stereo fader. Since I am in the area of ​​leasing. Only the console soundcraft are subjec like him without Galise. After a few dj rental price refund!