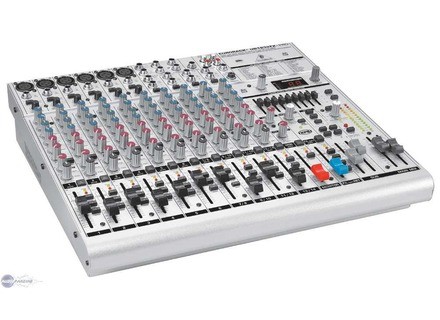 Eurorack UB1832FX-Pro, Analog Mixer from Behringer in the Eurorack series.

All user reviews for the Behringer Eurorack UB1832FX-Pro

Realaze's review (This content has been automatically translated from French)" Blah ..."

Behringer Eurorack UB1832FX-Pro
1
Everything you need where you need it, all inputs, outputs everywhere, inserts, busses, effects, everything you need for a home-studiste table or small group oriented. Others have summarized the characteristics, I'm not here for that.

Complicated configuration if there is not know, there are widgets and gadgets everywhere, but we manage.

The manual is clear and sufficient.

Many of breath ... Too breath ... And it sizzles, and then the sound comes out more ... Suddenly it's the way of the sampler, a coup is that the synth ... Frankly, this console epitomizes everything that is criticized Behringer years: it falls apart!

I had another Behringer when I was younger, she had held up well, and I sold as new, but there ... It really is disposable.

The feature I like least: making lousy suffered by the poor console did not ask anyone ... Frankly, all these static, all those crunches, these false contacts ... I agree that it is not expensive, but it is not a reason to get sloppy as!

I tried another Behringer long ago I do not remember the model, and also an old Samick.

Price / quality ratio: shabby, defects are emerging too quickly for it to be really profitable. I still use it today against heart because no choice, knowing that I sabotaged my songs with ...

Experience / choice: No, I expect to have more dosh to buy something that makes sense.

Ps: I should add that I am not anti-Behringer, quite the contrary, I have a BCR following me for years and never had any problems like what ...

Jej94's review (This content has been automatically translated from French)" the big crap!"

Behringer Eurorack UB1832FX-Pro
1
many promises, not required: still too expensive for what it is!

a simple table, classic, with what it takes to work ... except that the intensive use, daily, fake contacts appear, especially at the functional buttons. resulting in the need to fiddle with the switch as a barbarian for the sound to come back! with age (just two years), it takes 10 minutes to heat. ignition, it whines, like old interference, hum ...
Behringer is known for making disposable stuff, but that's really the core! a big shit in behringer, brand of shit that I never counted among its buyers. stuff for zicos bathroom, a real shame, as most of their products!

not terrible, approximate equa, it hums, and the effects are laughable!

2 years ago ... I cut my rag in slices rather than one cent pass mark for this shit! stuff that does not take more than one or two years to purchase or repair to crack on stage, but certainly not for serious use.

Chrolley's review (This content has been automatically translated from French)" but ..."

Behringer Eurorack UB1832FX-Pro
4
Using this table for almost 2 years (Home studio and public address), I am satisfied with this one.

breath Many parasites can be seen. It is sensitive to electrostatic environment you it seems.
False contacts are also apparent in the jacks.

The EQ is average

Many possible connections for a table of this size.
certe, she saw a lot (Bracher, disconnections, outputs), but I do not know if life will remarqauble ...
But applying that product to its price is almost the "consumable" Although

Getting started is easy!

The overall arrangement of sections is practical and clear.
It offers the usual functions of the majority and we ask no more for the price.
The manual is correct, but I confess to have understood a lot more for myself than even reading it.

The hardware does not look like any solid evidence, but for use sdentaire trs is correct and 3 years of use regularly, I n have never had any problem.

The preamps are correct, the signal is not too dynamic changes and keep close to the original. The EQ is effective for each. The 9-band EQ gnral has never been used but it looks good too.
The effects are not bad either but lack the parameter. The default is that you can only use one effect of both ...

I have hundreds of hours of recordings rptitions and improvisation sessions and I am still occasionally bluff by the record that I could get a table in this price range.

I never had criticized the table!

Anyway, I can tell you that with the use that I had and the price it cost me my purchase is more than depreciation! And it is still like new!

I'll spare now because I have invested to enlarge my stock pickups and I need more of.

lonomatopeur's review (This content has been automatically translated from French)

Behringer Eurorack UB1832FX-Pro
3
Yes it is two rack-mount metal part with his book.
-6 Mono inputs, 4 stereo, a departure monitor, a starting back in two tranches for its subdivision, edge to FX and 9bandes Equalizer with LED lights up when dessu problem of feedback.
-Exit to the Main Mix XLR and Jack, 6entres microphones with XLR and Jack.
Yes, a section of 99preset effects and integrity. But it trs basic effects and unnecessary so they are bad.

Yes, the configuration is simple, clear instructions for use, you sometimes have to be careful not to let the trigger Berhinger gadgets such as Voice Canceller ...
Yes, but the knobs are too tight can damage ...
Yes the manual is clear

-It is not clear tottalement
A breath-Persits when the cut end is mounted
-The equalizer is not efficient trs, trs even slightly

- I use it for several months
- Its simplicity its price! on the other hand, I already have a 2faders problems.
- I worked on before numriques on phonix Yamaha, Mackie and Soundcraft, this one plays its rle for the price it costs but we are way to move people who want the quality guide you to a mackie (onyx for example).
- Report quality but low price limit.
- No I will not repeat that choice, I think it maider lot in terms of equalization for each, but the day I tried a Mackie Onyx with the same configuration, I realized the equalizer as really bad.
Did you find this review helpful?yesno

pierredevers's review (This content has been automatically translated from French)

Behringer Eurorack UB1832FX-Pro
4
It is rack many you know, know vs the other features!
attention only six tracks on the 18 are single table that is very sound with just a band with drummer (drum kit microphone) one or two singers etc ...

This table includes all necessary functions in theory.
Do not buy this table especially not for its multi purpose or for the 9-band equalizer, multi effect is very funny but the gadget does not exactly graphic equalizer on the sound!
The manual is clear, the table is not complicated to use, the manual is clear.

The console in the absence of breath hugely painful and difficult adjustments due to the bad bill EQ. The report qualitée price is good but yet not rely on gadgets.
For a first table for a group I would recommend a soundcraft 12 track has 300euros with over mono tracks that our dear behringer. The mono tracks are most useful for a group.

Opt for a table of known brand with less tracks displayed in the name but in reality having the same number of tracks mono or higher for a slightly higher price to see equal.
Did you find this review helpful?yesno

buck88's review (This content has been automatically translated from French)

The config is simple!
Premire use trs satisfactory.
The handling is very easy and ergonomic.
The manual may be merit in deepening an example configuration.

NO Soufli at hand out but a slight level of the output phone ..
9-band equalizer trs effective.

It's been one month that I use, I recorded the vocals on my album (Black mtal) with (among others!) And the result is really satisfying trs. effects are somewhat LGERS but campresseur and expander are trs well.
It's a gift that has Monami the seller relies on the board and I am glad trs!
Very good value quality price!
I would do that choice again!

Dlw's review (This content has been automatically translated from French)

Behringer Eurorack UB1832FX-Pro
5
Mixer with internal effects and equalizer with very useful because it allows me to sublimate my monitoring speakers (they are passive Alesis).

No penalty to set up, everything is understandable and well routed. The manual, as long as some attention here is well put together, but it lacks some diagrams and it would have been perfect.

It's a mixer very well developed, it is very logical and it does not lack connections. It produces effectively what I instilled, non-parametric effects are nice and he added an external effect rack would be a luxury (and yet, I'm manic). Leaving the gain of each track neutral, it introduces no breath (it must be said is assisted by his compatriot, the DSP9024 Ultra Pro dyne). The equalizer is roughly well done because it brings strongly to my beautiful midrange speakers.

Less than a year in my possession, I've always been picky about consoles as generally good food need not be pushed into a corner. They must not be forgotten and crushed in all directions. A flat, the leaves are flatter UB1832FX by the various cables that I introduced into the mouth. My preferences go to the EQ and effects, and its various connections well arranged. Least, though I think I have not found ... ah yes! I spend too much time in my home studio, it's her fault! Mackie fashion puzzles me more and they stuck a trial Behringer (uh, the jealous should not be selfish like that) and for the price, I'd rather give my money to these pirates Germanic (I love off -the-law is in my nature). In summary, this console allows me to mix my chtite much chamber music and for that I thank every moment spent in his presence.
Did you find this review helpful?yesno

Veles57's review (This content has been automatically translated from French)

Behringer Eurorack UB1832FX-Pro
3
For character. The strict minimum, with effect +.
It comes soon trs has its limits!

Perfect for beginners and clear, simple to understand, mtrisabe after a few hours.
The manual is a bit tight at explanation, but gives us the basis for any departure.

Brought from the breath at the gain (this is normal, but a bit too), effective for rglage trs, but I think the sound is a little too mtalique, it has no "heat"!

It's been 8months I have this console. She dpanne future well before the "monster", but a little just to add sound to a group of 8 + people.
The large +, are the effects (which are Russian!) But utilisablent 1 by 1 for all voices!
For the price, it's not a scam! but if a c'tait again, I will wait to have more round to buy makie!
Did you find this review helpful?yesno

Gregos's review (This content has been automatically translated from French)

Behringer Eurorack UB1832FX-Pro
4
The technical specifications, I will not dvelopper here are found on the website of behringer (http://www.behringer.com/02_products/prodindex_ub.cfm?id=UB1832FX&lang=fre&formval=0) with images in all directions and all that ...

Well, nothing wrong, it's really simple to understand .. Everything can be routed properly, spare. The console is very easy to take in hand ..

Finally, not much to say on this console, except that it is a good investment trs, when you have small means.
Did you find this review helpful?yesno
Cookies help us improve performance, enhance user experience and deliver our services. By using our services, you agree to our use of cookies. Find out more.