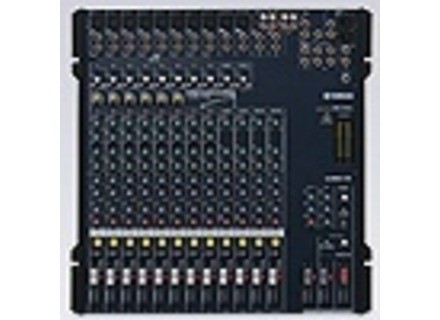 MG166CX, Analog Mixer from Yamaha in the MG CX series.

View other reviews for this product:
The Yamaha MG166CX is a 16 channel analog mixer that's compatible with your DAW via a USB connection. In fact, it comes with Cubase AI4 software if you don't already have your own. However, I've really only used the MG166CX as an analog mixer outside of using it with a DAW. This is a pretty complete mixer, consisting of 10 microphone preamps, with the remaining six channels being delegated to stereo line inputs. Each of the channels has three band EQ, with the first eight having a mid sweep option as well. This even has six built in compressors, as well as 6 busses and 3 auxiliary sends. It can also be rack mounted...

If you're familiar with the make up of analog mixers, you'll do just fine with the Yamaha MG166CX. It doesn't consist of anything out of the ordinary as it's just got a lot of what you'll find with your basic analog mixers. Having said this, it does pretty much have the full make up of options here, which is always nice. If you're not as familiar with the ins and outs of analog mixers, I'd suggest messing around with this more than the average person would in order to feel wholly comfortable with it. The manual might be a good thing to have for these latter users as well.

The sound of the Yamaha MG166CX isn't going to be too much to write home about, but it certainly does the job if you're looking for something to help route things here and there. I wouldn't necessarily recommend this as your main mic preamps in your studio, but in a home studio it would be a nice interface to connect everything together and you'd have the mic preamps if you needed them. The MG166CX would also work well for a live show set up, as it's probably best suited for this type of use.

Yamaha is known the world round for making affordable gear of all kinds, and they don't come up short at all with the MG166CX. While it's not the best as your console in your home studio, it will definitely do the job and at the very least will serve as a routing mixer. It's not expensive at all for what you're getting, so if you want a 16 channel analog mixer in the vein of this kind, the MG166CX is going to be the one of the cheapest and most complete you'll find.
Did you find this review helpful?yesno