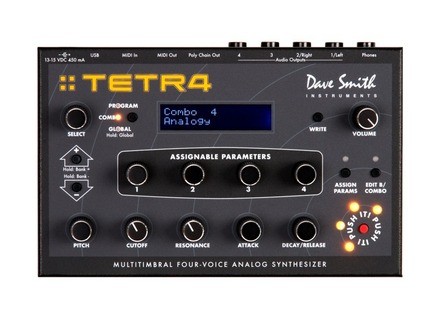 Everything is simple enough, personally I do not use comp and I am doing really well in the sub-menus, I found that CIOs are much nicer to navigate than many other bikes have matrices and submenus.

So we enter the big subject: obviously you do not choose this synth for its interface, although its size and bulk are a singular advantage: it is as big as a Moogerfooger home that you know. In short, its level is very broad. Initially, it actually sounds a little soft and goes everywhere. Let&#39;s be clear: this indolence is due in part to the setting: the major part of the presets are set to release a profusion of attacks and has picked it up. So it&#39;s very relative. After some regulation of adsr, we see that it can be quite nervous. The sound is quite impressive. It does not sound trivial, it has real presence. Derived from the Prophet 8, half of polyphony, he added 2 subs that can magnify the sound, but that requires fine tuning if it is the destruction of the sign - I resumed analysis by KB Pro8 UK: "Warm, fat , ball-sy, earth-shaking sound "... add 2 subs and it&#39;s war! The white noise generator is quite creamy, pleasant and determined, he adds a very nice grain, reminiscent of the vintage. He also has a function that simulates the tonal variations, such as old analos unstable. Not negligible. If it sounds pretty sweet in appearance, as soon as you look at his feedback, we arrive at sound very thick, sturdy and not easy to manage. In short, the AC in life.

The filter is very interesting. Indeed, the filter ISD body, it sounds very strangely. Self oscillation is not unpleasant, AC whistles quite musical. 2-pole, its resonance is very subtle, at 24, it starts to severely attack. Here too, the presets are all a generally "amount" fairly high, which prevents brewing across the spectrum of this filter, but once settled, all that sounds huge.

So, all this combined gives a machine capable of much. For leads, with the subs, sync, and resonant filters, we arrive at good results. The webs, with huge release and consequent modulation capabilities are very nice. And for the bass, you get some excellent results. Level below, no worries, the filter can make sounds that beats the cortex. For very low fat, it needs, however, more work. We quickly had a sound very dirty, unmanageable, and on this point, it may be less effective than a Moog LP. But it is not ridiculous, not even at all. Concerrnant the famous filterbleed: yes, it exists. on the other hand it does not bother me at all. I have machines that have other defects, and this one is so nice compared to a buzz, for example. In addition, as demonstrated by some connoisseurs, the filterbleed exists in many other renowned manufacturers (modulaire. ..) and you can even hear one on a Model D on a demo comparing it to ... prophet8 (!!), as what, even in the "legend" there may be defects ...

I bought it at its output, after having long tried in a small shop of his fans, not far from where it was designed (Robot Speak). For its price ($ 800) is offering an excellent synth polyphony, without forgetting that it is chainable with other machines using the same engine (Prophet, Mopho tetra).

I have had an opportunity to play extensively test different machines or analog: Six Track Jupiter6, MicroPreset, BassStation, Evolver, Little Phatty ... We often talk about CIOs as machine input ranges: While prices are very attractive to CIOs (and again, everything is relative, I can not afford to Snobbs 800 $!!!!!), but Smith economies in production: no keyboards, no buttons in all directions ... It create machines affordable without sacrificing quality so far. Admittedly, the knobs are far from memorable, but for the price offer was still a beast! A major source of savings, and therefore critical on this engine is the lack of multi-mode filter. I think CIOs to play a card very interesting: they have only a single filter for, indeed, a multi-mode would increase the price considerably, but the proposed filter has its own grain. It&#39;s probably better to propose a single filter that sounds rather a multimode only offers emulations-simple advice.

Now, compare to other machines, the Tetra suffers, in my opinion a bit too many of his faults (economic cf. The knobs, etc. ...) and its location "entry level" precisely, and we forget to compare the actual machine. ON criticized for not sound like a moog: it is, first, a perspective, because the face has a Voyager, I do not say, but face an LP, he defends well. And do not forget that if it does not sound as fat they Moog, it&#39;s the only thing we can blame him in such a comparison. In contrast, for 500 € less than LP, there is a quantity of something that he will never do. (Also specify that some believe that the sound is more moog finding in the LP than in travel that is far from the model back D. ..)

Remember that the Tetra is a derivative of Prophet8 and it inherits the same engine noise: the same engine that has received numerous awards, highly esteemed by professionals. A test in KB (France) showed that it was not ridiculous in the face of popular vintage, especially opposite the Oberheim. In Sound On Sound (UK), Tetra is seen as a synth incredibly rich, and that its only current competitor is the Code4 SE ... which is 4 times its price.
Finally, some believe that nothing beats a andromeda, but all tests seriously agree that it sounds much less than analog Prophet. At that price, it makes the expensive "routing capabilities." As well take a micron and a Moogerfooger! (Irony not worth Chouin).

In short, the game of comparison, the Tetra is often singled out, knowing that we can see in these comparisons (I do not specifically mean ISD) has almost everything and its opposite! But realistically, this synth is a machine that has very large potential, which has a real grain, very strange, due to his very personal filter, but also capacity building, research of its large enough. Not as a hack evolver, and probably not as much as a androgen or a Metasonix (dream!), But the field of experimentation is already so vast ...
In short, at this price, even if it was more expensive, it&#39;s serious, that sounds really (see the press notice ...). And of course, it is analog, with the true grain seems to cover all possible sound spectrum, where a VA is much drier, less extensive, less hot, less crazy .... And nothing but the first preset-Wagneriana gives all-important sound of Tetra ... So when you put your hands in, it is a treat!
See the source
Did you find this review helpful?yesno
Cookies help us improve performance, enhance user experience and deliver our services. By using our services, you agree to our use of cookies. Find out more.