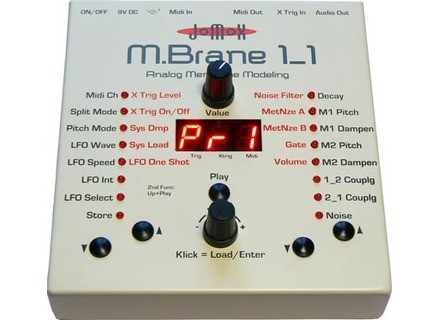 Tapeteaser's review (This content has been automatically translated from French)" Amazing is not it?"

to any type of perceived skinned, snare, conga, tom, kick, pahu, toere ... and a little tweaking on the same kind of ride a lot, a flask, a stick, midi controlled with other lfos and the beast takes us in quite specific countries ...

A rather unusual design t-bridge oscillator, wholesale 2 oscilloscope interacting and noise, the basic settings available decay, pitch, dampen, noise, and the game does coupl12 bridge and 21 for managing the interaction between the two "skins" (oscillators).
LFO waveforms with moult which modulates a choice of oscilloscope or both or nothing.

Controllable via MIDI or trigger.

The interface is identical to that of mbase11, not suitable for m-brane, because the parameters interact and requires a lot of back and forth between menus, editing sounds becomes quite tedious and noisy (the navigation buttons and sound trigger are a resounding clack clack). More with a lfo on one parameter Mbrane must stop playback for editing, which is a shame and not practical at all, but it's very pretty to look at it will blink and display all kinds of letters and numbers corresponding to the values ​​modulated by the LFO ...

But despite the ergonomics Mbrane's still the original "big" sound module. Some sounds are bluffing realism, which is pretty amazing for analog module.
Signal-to-noise 112dbrms (!).

I for 1 year and a half. What I like the most is made available by the machine, its silence, its robustness sound palette, it pierces into the mix. Less is its ergonomics.
A must in my arsenal.