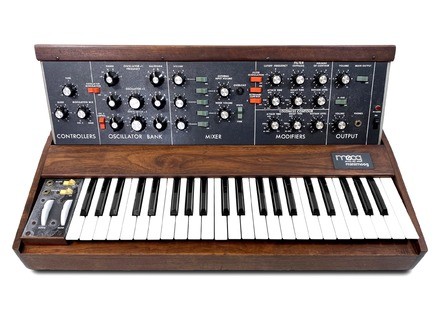 Control devices include a 44-key keyboard with velocity and afterpressure outputs, pitch bend and modulation wheels and many control/pedal input jacks.The power supply accepts any power voltage from 100 volts to 240 volts.

Dual mode filter module includes dual lowpass and highpass-lowpass filtering. Dual lowpass mode consists of two Moog lowpass-resonant filters in parallel, one per output channel. Highpass-lowpass mode consists of Moog lowpass filter in series with a highpass filter.* CUTOFF control sweeps the frequencies of both filters throughout the audio range.* SPACING control sets the spacing between the frequencies of the two filters, over a +/-3 octave range.* RESONANCE control adjusts the resonance of both filters, from none (pure lowpass response) to filter oscillation.* KB CONT AMOUNT control sets how much the filters open and close as the player presses different keys on the keyboard.* Dual Lowpass/Highpass-Lowpass switch selects between dual lowpass operation or highpass-lowpass operation.

ct's review (This content has been automatically translated from French)" A good old machine!"

Moog Music MiniMoog
5
Monophonic, 3 octaves 1/2, used with a Pro-Solo in CV-Gate (added post-purchase) non noon at the origin. no effect, not possible backup, so it's ultra roots. 3 oscillators particularly unstable (Model D) and a noise generator, heater recommended 1 hour. 1 legendary filter, 1 envelope ADS and ADS filter envelope for the VCA. Modulation by the 3rd oscillator or the pro-solo. Possibility of feedback, then the sound becomes close to a big, distorted guitar: D

No need for manual configuration is VERY simple because monophonic synth with fairly limited possibilities, but sufficient. Editing sounds is very simple facade.

I make electro and techno. The Minimoog excels in these styles. The sound is incredible, warm and alive. Unfortunately I do not use keyboard because I'm not good keyboardist. However, the modulation elements to allow tt pretty well interpretations. No aftertouch (not available at the time), and no velocity either.
This synth excels in low and hot pads, recommended to the funk / disco ... and right techno and cold!

I use since 2003, is the first model of this brand (and only) purchased.
What I like most: sound, potatoes, grainy and warm side, even distorted and unpredictable sound that makes human (almost).
What I like least: it is aging badly, buttons lose their accuracy and crunches are increasingly present. I did review, but only half as it is VERY expensive. As it is heavy and can not bear to travel.
It may be a bit expensive today because some vst (admittedly heavy cpu) 10 times cheaper arrive at a sound VERY close (I made the comparison, and I was amazed)
With experience, I rather would buy the travel, but beyond my means. That said, I also lose the unique sound of this model D. So I'll keep it until I die.
This is by far my favorite synth.


6 of 11 people found this review helpful

hugo280's review (This content has been automatically translated from French)

Moog Music MiniMoog
5
1, pre-wired synthe monophonyque of history.
and still the gold standard.
noon but not c is possible midifier.
polyphony but then no one knows

C is the basic tool to learn the principle of all the keyboards that followed.
because almost everything that is today inspires s cabling system of the mini.
Basically when you buy a mini one takes a slap in the head when the machine industry.
but for this to become a killing must respect some rules.
we must first understand the principle of the oscilloscope machine.car must be paid al unison.
c is easy enough to do it to have a good ear or a tuner.
But here it is possible that there have an offset with the setting of octaves.
then you have to play the screwdriver as there are small screw behind the machines to adjust each telephone marketing as well as the oscilloscope 440.

Once properly set the machine to have a little theremin sound can become huge like molten lava.
I have several analos but once understood that the principle of use, c is the dominant male, the lion, the king, when he speaks everyone is silent.
J made a comparison with a plug in the mini that I will not mention and it is not true that we find the same stamp, but when you plug the true odds on a machine faster than s aperois of a sudden the sound comes alive as huge and sharp aparaisse Infrabass and every time.

I possess for one year and c is about the machine's more alive than I even have my MS20 is the ball does not have this atomic dimensions as vivid and unexpected as the mini.
the kings the kings I tell you

APRS its establishment 30 years, the Mini does not shine by the number of possibilities, but is a REFERENCE or more precisely a stub comparison in terms of sound. Although sr thanks are famous but also the filter oscilloscope. One may regret the absence of LFO today ddi free the three osc. And lack of vritable Sustain level envelopes. But the limited versions of Studio Electronics MidiMini or custom RMS of the era were rsoudre the "problem".

We can do better. Designed well, particulirement ergonomic tilt panel, large buttons for a good grip, circuit signal clearly identified by a button function. This is certainly one reason for his "good ownership" by musicos the era and its success.

He won acclaim thanks his monstrous bass, round and ultra-fast attack and its leads. The models with volumes in 30 years of production (filters etc. ..) there are no two that sound the same. Collect them all!

I would put 10 in its class of sounds.

I possde 3 Minimoog, a tilt and a version older version and a new tilt vger.
The sound of the Mini seems to remain inimitable even compared to the Voyager (cleaner). The sound of the synths, numriques or "new analog" does not seem yet made up to those old analog ... anything with good effects derrire to magnify or soil .. .

Objectively I think buying a Minimoog today, given both the sales price recorded on the market opportunity, is not reasonable. Even if the Minimoog is a MODEL in terms of sound, and will remain a myth in the history of electronic music (because it was the first the modular APRS), the acquisition of a such an instrument (for the price) I think Relva purchase / passion. It is a fact Reserved musicians ISSA with the means to pay in addition to their existing gear. For some it is an antiquated Exceeds premium .. and they are right for others (and in my case), it is the result of an alchemy feeling / sound / legends that make me an instrument possdant, vritable object Electronic violin inspires me in my humble Creations.

In its class I would put 10

SoulPedro's review (This content has been automatically translated from French)

Moog Music MiniMoog
5
CHARACTERISTICS hyperconnues but hey!
- Monophonic analog synth
- No memory
- 44 keyboard keys not sensitive nor the VLOC aftertouch (RVer should not)
- 3 of 5 octaves tunable oscillators + 1 position low frequencies
- 6 waveforms per oscillator, can not be combined:
Oscillators 1 and 2: triangle, saw / triangle, sawtooth (positive) square off rectangle, rectangle strait.
Oscillator 3: The saw / triangle is replaced by a sawtooth down, the more useful use LFO
- For the Mini does not ddi LFO is the third tilt that can fill this rle by cutting its output audio and keytracking. The possible destinations are the overall pitch and filter cutoff frquence.
- The amount of modulation is determined by the wheel ...
- Gnrateur a white noise or pink
- The oscilloscope, an external source and possibly gnrateur sound mixes are before attacking ...
- 24dB/octave filter rsons we do not Submitted, absorbing basic ADS (R). The keytracking is adjustable 1 / 3 - 2 / 3 - 3 / 3.
- An envelope with VCA ADS (R) also
ADS envelope (R) can rgler the attack, decay and sustain. There is no release, unless you press a switch which will give the release of the hard decay. Note that both the triggers and release of the VCF and the VCA
- And out!

The modulations were more a portamento and pitch bend without resort center detent.

CT Connect: 2 mono outputs low and high, an input for external signal
- CV input and gate, among the CV for the CONTRL frquence VCA and filter cutoff.

All in a nice wooden box!

One of the big strengths of the mini: Ergonomics is gniale. The panel that Relva to be under the eyes and the fingers, large well spaced buttons, the little features, everything contributes to make a machine CHAC IMMEDIATE. No need for manual, we are immediately out of the sounds that go well.

The keyboard is quiet and enjoyable trs. The pitch bend and modulation are trs direct and sensitive, which dconcerte at first, but once it is made is a rgal.

One often reads that the Minimoog is a musical instrument from Entire: it's all true. We must learn to "play the mini", changing the patches steals while continuing to play ... and becomes a real treat!

Obviously a good kills the sound, and it is not the legends. No imitation, whether hardware or software, it does happen the ankle. The sound is the direct, powerful, warm. The filter is always REFERENCE sr but the oscillators are also a large part of its sound quality. So these are the leads of Pink Floyd, Kraftwerk low, the theremin Portishead, etc ... everything comes easily by turning a few knobs and no mistake: this is good!

A point to emphasize is the expressiveness of the keyboard which, although not significantly n'tant VLOC can really vary his game, the envelopes was not repeated if you play legato.

The current price is anything but reasonable for a monophonic synth, however you can be sure that you can resell it at the price you will pay and the acqurir vritable an instrument. If it is for the driver from a squenceur and paste the bottom of a mix is ​​not worth the time, it is better to go home Arturia. If it is to play diffrent, you will make the diffrence every day by putting their hands on it. A bit like an old telecaster ...