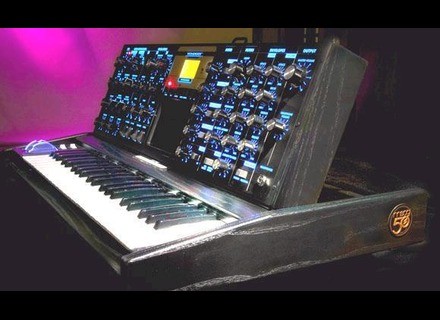 graal7's review (This content has been automatically translated from French)" nice synth but too expensive .."

Moog Music Minimoog Voyager Anniversary 50th
3
I had the 50 th model with one bank of 128 sounds.

yes it is true that the manual does not serve a great things but that use is very simple exagerer.cela should not take time to understand all the possibilities of the machine.

basically I was rather disappointed by the sounds of this synth, apart from the bass must be honest, who are without comparaison.même looking in all banks that I could find and making me even sounds I always stayed on my faim.Ca does not sound quite analog sounds especially for comparison Leads.en I immediately preferé hack on my old CS15 while the possibilities are moindres.Faut be clear, this has nothing to do with a minimoog of the time.

I kept it about 6 years and resold without regret.mais yes it is beautiful, impressive and good quality workmanship, for cons I learned from a dealer that was sav galley and if it was send cards or the synth usa it could be long.moi I've never had to worry fonctionnement.donc you really try it before to get an idea compared to what the we search for a 3300 euros you may be disappointed.

Moog Music Minimoog Voyager Anniversary 50th
4
We find all that "missing" at the Old D "and many other things. The Release, FM, the filter 6 dB, 12 dB, 18 dB, 24 dB etc. .... Over Possibility to connection Sources / Destinations in faade ACCS easy and can be strained with the XV-351 box into a real little semi-modular like the ARP2600.

Ct finish:
This Anniversary given me the impression of playing on a real musical instrument, the violin real and not an electronic computer dressed synth.

He throws when we present all over the lighter blue faade a pice black. A real tree Nol The bad language (like me) will say that has gives it a 3 ct Nordlead! This as when the brightness goes back, there&#39;s a hiss that is heard I netrouve not ag &#39;Able dutout. Dtail you tell me ... But given the price of the BTE, we shall be choosy. Finally, if the scale are being Lumire, the position of the knob it is not! So, in the dark (and contrary to the north) you do not know how to tone knob is positioned.

Ct ergonomics:
I found all the comforts of the old Mini, a large "board work", tilt, large knobs. We sailed fast and bien.Vu my type of game, the keyboard a little soft by some, did not the. Regarding the touchpad, once the habit, I had fun making cool stuff, among other effects to evolve and other sound effects in real time.

Parenthse Marketing:
The guy has quiu article in SOS, a possde Signature and said that if re c&#39;tait for $ 1500 less, it would take a anniverssary. I think frankly one year APRS limit its release, there are better quality for less than $ 1500 Signature. me who has a little (much) the mental collections, I buy a Signature hsit. But frankly, when the diffrence merely a look of Sir Bob Himself in the machine ... and a dcalco its signature on the faade ....
Today is the MODEL Electric Blue coming out. It seems that the owners of Anniversary, A model who thought they had "unique" or Dumoine original, have enough trouble.
Overall, I find that the BOB Co. Managers take too much on the vein and that turns a foutage of mouth.

Good and well there is no dithering for 107 years. I tried it with the Mini in the picture above and all with Dynaudio BM5 for the occasion. The sound of the Voyager is cleaner and the "contours sharper" than the "Old D".
It seems that our old bangers that will keep much longer in the smooth li imprcis characters of old components ml the patina of time.
Deplus, there is a certain type of "grain" of the late rglages of Fitr that I failed to find the Voyager.
Nanmoins, this synth has a good momentum and good PCHE. And it sounds analog. While today&#39;s analog, but analog all the same. And it sounds Moog and not the "Moog" or "Moog" as we sometimes hear of some synths. So for me it is part of the Moog family. So I understand why the studios located in some beautiful analog sounds from the factory, as-they have not convinced me.

I bought (in USD) Anniversary version because I read in the mag. SOS an article / essay that said c&#39;tait the most complete version of Voyager: last OS, hardware imperfections corrected by over Sigature and Performer gnrale and better finish than the Signature.
Then got personal, I find the wooden versions of two other less "natural" than the old Mini. And matte black suits him well ...

To conclude:
These opinions are my own do well sr. I would say that for a lover of old like me blunderbusses the Voyager can replace the "Old Class" in gnral and not an "Old D" in particular. However, it can set up a complter old grandpa (I mean synths) with no problem by playing in the Next-Generation gnral analog (with its default and its quality s) and Moog in particular.
For playing the old version Old D oscilloscope (SN 2XXX) and new oscilloscope (127XX) I notice a lot more of his Difference with the oldest of the Mini with the latest oscilloscope whose taient much more stable , and all identical waveforms (Verify the osciloscope) on three oscilloscope, which is not the case with the oldest. Notice therefore those who wish to have an old Mini ct a Voyager, a better acqurir MODEL old oscilloscope in terms of complementarity.

Philosophical Opening:
In the old analog guguerre / Soft-virtual, the question I ask is the chance of survival gear such as "new analos"? (As vger, Andromeda and others) because all it seems difficult to find the characters of the old cuckoo clocks (including the default quality of their era are today), I think that much &#39;there is no reason that the soft / virtual galer can not run the new analog. For what is lacking compared to the old virtual analos new analos ... did not ... This is the notice that is not based on much, and demand vrifier time ...

Epilogue:
I have to say finally, that even if it is a beautiful machine trs, with which I had so much fun I have not proved what I felt with my other old synth the Emotion. The again, personal opinion. I did not feel that I proved when I first got my Mini or my 2nd or 26000 or my P10 ....: