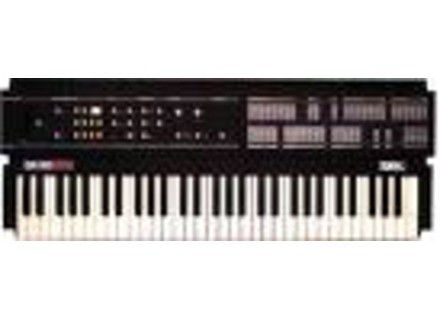 Siel DK 80
4
12 polyphonic analog synthesizer voice, keyboard 61 touch-sensitive, released in 1985. It's actually a synth based on two separate channels: a DCO, VCF 1, 1 EG for COD and one for the filter, an LFO for the COD and one for the filter. The envelopes are six points, type ADBSSR. Each channel is 6 voice polyphonic and can be superimposed for the 12-voice polyphony with the same sound or the keyboard Sliter anywhere to play two different sounds. Side waveform there is a triangle and a square for COD, the feature is being used as a square waveform of an organ, by adjusting the harmonic content of the feet 2 ', 4', 8 'and 16 ' The filter is 24dB/octave resonant low pass, but the resonance n'atteind not self-oscillation. There is a noise generator, and is assigned to channel B A major flaw of this keyboard (and which certainly explains that&nbsp;it has not sold) is the memory. 40 Presets without great originality, though some&nbsp;are nice, and&nbsp;only 10 user programmable patches. For a synth&nbsp;from 1985, it is&nbsp;frankly a little light. It is therefore necessary to use an external cartridge to store 100 sounds, and without it the keyboard can be used for synthesis. Next afternoon he is a match that is common at this time and the connection is complete. However, for those who bear the vintage to the end, there is a SIEL MCI interface to connect to a ZX 81, an Apple II, a Commodore ... and edit the synthesizer through a dedicated software.

We are in the 80's, so it's reign as the interface calculator. OS is heavier than what is found on the Korg the same time because one must always make a selection setting or program by pressing an ENTER key. Changing values ​​through two plus and minus key, but there is no knob to assist them. In addition, each parameter must be entered separately on Channel A and Channel B by a selector button.

You would have understood, ergonomics requires some practice, and the games live, it's pretty detrimental.

While Italian, DK 80 is not the small Bontempi organ that gave the kids at Christmas 10 years. Similarly, if the look is furious to think Korg Poly-800 or 6000 DW, it does not sound at all in the same way. Filtering is very different, and generally the dynamic output seems more powerful. This is not an American synth course because the sound is much less powerful, but it's not a Japanese instrument, in this sense does SIEL or not the finesse. Especially lead and copper are powerful. In short all the classic analog possible, even though the strings may seem slight. Organs are good for those who love its light and air (that is Italian ...)

The 2 filters and 4 LFO can do interesting things, but the architecture is classic and can not be expected to cut the modulations of breath. No Poly-mod as a Prophet or OBX, FM not possible either. The SIEL DK 80 is an analogue sum entirely conventional, but complete (more than a 106 or a Juno Juno Apla). Although not among the best, it is far from being the worst.

I personally have a set of keyboards with 25 years of average age, and this sets the SIEL DK 80 do not swear. I had the opportunity to play in 15 years about fifty different synths, or to test a little stealth, or for a few hours, which allows me to say that the SIEL not be ashamed of these capabilities sound compared to other analog polyphonic from the same period. But what a pity that the original memory is so limited!

Among the defects we note any plastic finish rather light, which is not up to the Korg's time, for example, a keyboard and not very pleasant at first, because it looks like a toy. All seems fragile. Defects that turns into quality at the time of take: The DK 80 is very light.
However, the 80 SIEL DK forget its shortcomings in terms of its current rating, at the grass roots, because very little known. It is also very rare and there are many last fault!

22 of 22 people found this review helpful

Siel DK 80 manuals and other files