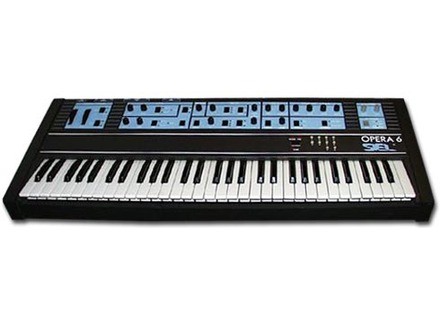 Siel Opera 6
5
Keyboard 5 with channels 6 octaves polyphonic 2 COD by generating waveforms and square saw (pulse width modulated by LFO), one can fine tune the VCO 2 to thicken sound. 24dB/octave VCF, 1 ADSR, 3 LFO, ADSR 1, a pink noise generator, MIDI in and out, a mono output, 2 DIN inputs to act on the VCF and volume using pedals.
Adjustable dynamic on 4 levels can be sent to the VCF and / or VCA. On the control panel, 1 modulation wheel and pitch wheel 1.
There are 95 programmable memory location all. The backup is done by K7 ... or dump ... But yes! There is no possibility to dump all programs simultaneously, but when valid by "enter" after selecting a program, corresponding to prog data is sent via the MIDI output. I've realized by chance one day when I forgot to stop my sequencer to record, I selected a program and another in the wake because it was not the sound I wanted ( display gives the No. prog) at the song, I was surprised to hear the sound change during the sequence. Following this, to make my backups, I recorded a song vacuum with a slow tempo, and whenever I entered a new program (eg measurement1 = strings, brass = m2, m3 = piano ... etc). Certainly for the load it is a bit tedious because you have to stop the sequencer at the end of the measure and validate the registration prg to the desired location but it allows backup and especially more reliable load on K7. Later, I read that, yes, it was possible to dump a prg from Opera 6 to Expander (rack version of Opera 6 output the following year). This explains it.

Rare synthesizer friendly look with its blue control panel on pale gray striped dark blue background which is a bit like the Oberheim style. This is a traditional analog offering a potentiometer or by a switch function, method which tended to disappear when it is released in 1983. It was the same year that the DX7 and membrane switches, novelty that would be imitated by almost all manufacturers and source of many problems when the contact has weaknesses ... Since then, spotty synths are again in fashion .
Editing sounds is easy if the basics of subtractive synthesis are known. Even if we know anything, starting from a recorded program can still fiddling the buttons and hear on the result. It is an intuitive synth, no need for manual although it is still easily on the web.

In terms of sound, this is the analog JM Jarre's style Oxygen. Do not expect realism, long ago that the sampling is here for. on the other hand, if you like synthetic sounds, layers, sweeps, synth basses, sound effects and various gurgling, it will make you happy. The five-octave keyboard is dynamic but the response curve is not terrible for the nuances it does not. I personally do not use it for percussive sounds so it does not bother me too much.

Because it is not getting any younger (like me), it is robust, it has buttons, and it still works because the sound editing is more exciting than a digital, it is a part of all my synths, I love that instrument. With a chorus and a bit reverb output, it holds its own.
I bought used around 1987 or 88 at a time and (almost) all keyboardists got rid of their old bouzins to invest in digital. It fell well, I personally loved the analog and enjoyed long synthetic music: Tangerine Dream, Klaus Schulze, Kraftwerk, Vangelis ... I had paid dearly: 1000 Francs 150 €. This was the time when I bought a Moog Source, Korg Polysix, a Prophet 600 and even a VCS3 at ridiculous prices. It seems that their side has seriously increased, but I do not care, these are all keyboards that I always use and I will never part. Oh yes, I almost forgot a really important thing, the problem is most known for the Polysix but it also concerns the Siel, there is a significant risk of leakage of the stack. It happened to me and destroyed part of the printed circuit. I could fix it but it was limited. The solution is to deport and desoldering the battery in a place where the chassis it will not do any damage.

ZeeByeZon's review (This content has been automatically translated from French)

Siel Opera 6
5
The SIEL Opera 6 is a polyphonic analog synth.
Polyphony is 6 votes, with 2 oscillators, a filter, a VCA and envelope per voice.
The oscillators are COD. Waveforms (sawtooth and square) can be combined. Each oscillator has an octave setting to 3 positions. The second has two settings in addition to the disagreement over the first (coarse, fine).
The filter is an SSM, and the envelope (which is analog, and excellent).
There is also a noise generator.

There are 3 LFO. The LFO 1 and 2 are respectively dedicated to the modulation of COD 1 and 2. Their settings are not independent, they still work at the same speed (approximately) and with the same amplitude but are out of sync. The three LFO can modulate the PWM to be one or two oscillators or the filter, or both, and has three waveforms (triangle, square, triangle + square).
The three LFO is analog.

Keyboard 61 keys with velocity, which to my knowledge is unique in a synthetic analogue old. The touch is very light and fast.
Velocity is used to control the amplitude of the envelope (which itself can be used on the VCF, VCA, or both), or the attack time of the envelope, or both. It is not very precise, but usable.

There are a pitch wheel and a modulation. The pitch wheel has a setting for the assignment DCO1 the DCO2 or both. The Modulation wheel can act either on the LFO 1 and 2 or 3 on the LFO, or both.
Connectors to the pedals controls are present, one for the VCA and one for the VCF.
MIDI in, out and through. There is also a cassette interface.

95 slots are available for the sounds, which are all editable. There is also a manual mode, which here is called "free".

Configuration is very simple, one button = one function.
The manual is only useful for advanced rules (Noon. ..) that can be counted on the fingers of one hand.

I play funk and this synth is great for that style. The quality of the filter especially in the treble can sound with a big sin, and the velocity of the VCF is great for sounds in the style clavinet.
The two oscillators and envelope allow good quality tablecloths too.
Like many analog synths, each will use in its own way, and this synth is particularly adaptable to very different styles.

The sound is rich in harmonics. If we compare, for example, a Korg Poly6, the Korg seems muffled in the high when the filter is opened.
The resonance of the filter can be pushed to self-oscillation. When you push the resonance, the sound is rather thin, not too fat compared to one or poly6 SH101.

The factory preset sounds pretty amazing offer, ultimately not as unrealistic as one might expect on some records. But overall, it's an analog synth, and still very poorly mimics acoustic instruments in general.

I use it less than a year. I also have a poly6 and SH101 and each has a sound very different. It's nice to have additional sounds.
This one is more incisive than the poly6, sharper. And it has two oscillators or the korg there are 1, which opens up different possibilities. The poly6 is much warmer, darker, too.

For its price, it is inevitable because it has unique characteristics (velocity, MIDI ...).
It is very rare compared to Roland and Korg.