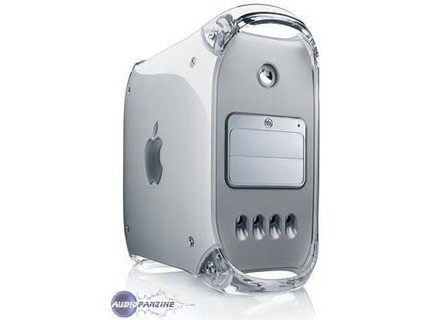 Apple G4 2x1,2 Ghz
4
I bought OCCAZ 'in October 2003 (he had served as the Apple Expo). Like all my software running on MacOS9, I wanted a computer that can boot the OS and as powerful as possible to be quiet for long. In fact, it was now more powerful than the first G5. And three years later, it is still far from being ridiculous.
In addition, Digital Performer I use is optimized to work with a dual processor. In total, with 1GHz of RAM and 240GB hard drives (one original FDI, the other in external Firewire), I never reached its limits, though I often load multiple plug ins and virtual instruments.
In terms of reliability, is perfection. Never had a problem despite intensive daily use and my brothers / sister / parents / nephews who are all on PC are a little jealous!
However, an anecdote: When I bought this computer refused to read DVDs. Anxiety. After testing, the technical service from the seller to establish that there was a problem with the video card. He ordered a new, standard exchange: same problem. It turns out that the video card mounted in the original Apple was simply incompatible with the DVD player. Rather embarrassing for a manufacturer that claims to offer fully integrated configurations. The seller swapped the original card against another, also more expensive, without making me pay the difference (yes, it exists: Ydeki-Paris 5e, when one is happy with his vendor, it must be said! ). Since it is happiness.
Remains only one small flaw: the fans are rather noisy especially in MacOS9 (under MacOSX).
Overall, however, if you are around € 800 it can be a very good deal, but make sure it reads well but the DVDs.
Did you find this review helpful?yesno
»