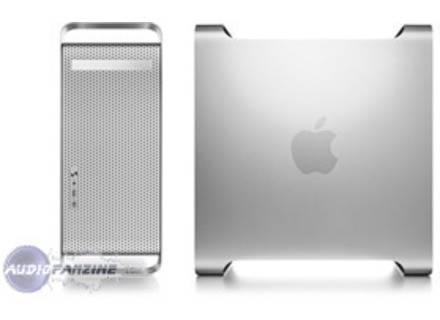 Apple G5 1,8 Ghz
3
I recently had the experience of using an Apple G5 1.8 Ghz at a professional studio in town. It's definitely an older computer at this point, but it can still be okay depending on how you are using it. The computer I was using also had 4 GB of memory. While the studio had a ton of great gear and we ultimately captured the sounds we wanted, the computer did give us some problems in the session. It was running with a Pro Tools HD system, so you can still run this with an HD rig which makes sense because you won't be taxing the computer much to begin with. However, if you are planning on running any RTAS plug-ins, it's simply not going to be smooth. The problem for us was that we had sessions that already had a bunch of RTAS plug-ins from home that we were overdubbing over. We actually had to disable most of the RTAS plug-ins to get everything to run smoothly. It's not that it wouldn't record - it was just a bit slow and in the middle of a few takes it crashed completely and we lost the audio from the takes, which happened to be pretty good ones. After removing the RTAS plug-ins we didn't have too many issues, but the point is that you won't be able to run much if you're using Pro Tools LE or something native. With HD you might be able to get away with it, but I still don't think it's really worth it. I myself have a lap top that is already a few years old and has the same amount of RAM and a faster processor than this computer. You might be able to sneak by with it for a bit, but why do so if you can have something much faster for not too much more. If you come across a G5 like this for cheap it might be okay to have, but don't expect too much from it, especially in a professional studio environment!
Did you find this review helpful?yesno
»