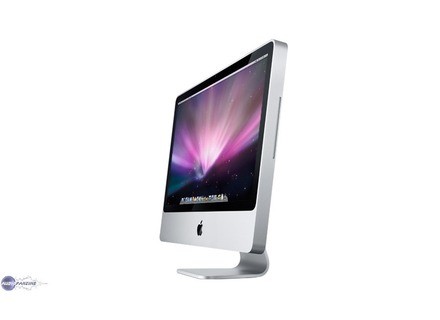 Charles Bunk's review (This content has been automatically translated from French)

For some months now.

It's beautiful, reliable, runs well and is a trs trs silent. It also wins a tour of the place since there are no CPU!

Not with Apple, I'm a no-switcher. I had a laptop before.

Honnte really was all for 1000 euros (refurb) includes the following software is very practical, it has a bright screen and a dual-core ... It's not a graphics card to play, but I keep a PC to a.

I do not have enough of experience, but I am satisfied plutt. I will boost 4GB of Ram and I think I will be comfortable with computer music.

Massimo Romeo's review (This content has been automatically translated from French)

Apple iMac 20" Core 2 Duo 2 Ghz
5
Apple ... when you have one, it does not touch the PC (or can be, except for work)
I use it since March 2008 and it always pleases me much. (Almost) never crash, the world has changed pc: yeah, apple dveloppe all programs or at least they undergo authentication before selling their care.
What I dish is that it is complete ds its out of the box (think like a sweet wrapper, to make you want to open it as a kid)

Go talk technical:
I MODEL 20 "because 24 is really big: even when you should step back from the screen to be comfortable with a 24. I prfr add a notch 20 "apple cinema for computer music. So 2x20" are better than 24 ", I think.
MODEL The standard is going to light power level (compared with pc same price) but you need to know what you're looking for. For my part, I do not play it, I surf and I'm the mao.
So I opt for the basic version. Consider, however, add a external hd at least 500 gb (especially for the automatic backup named "time machine" and spent 2 GB of RAM (4 GB or, as I did)

The machine you have a real, beautiful and ergonomic. Logic and with what happiness

With the exprience? Well I took the 3 GHz n'tait but not out yet

(What question). Clearly, I took another cpu but more powerful computer, things change so quickly. So I would say this: in terms of prices in March 2008, I made that choice without hesitating.

-> The one-year warranty with no apple care and apple care expensive. (I thought that the minimum guarantees in U.S. silent for two years)
The seller told me however that it was possible to buy the Apple Care before the end of the first year of use, which quickly get out 179 euros extra when same. For my part, I'll take a few months, you never know.

-> Too bad the wireless keyboard does not have a box numrique, which forced me to stay with my wired.

In short nothing is perfect: 9 / 10
Did you find this review helpful?yesno
»