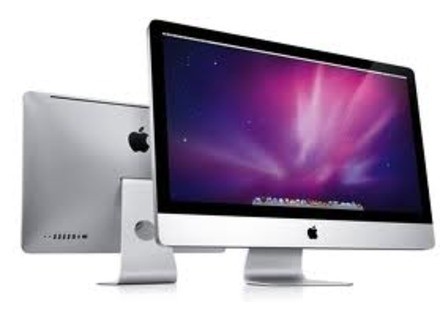 iMac 27", Apple Desktop from Apple in the iMac series.

Apple iMac 27"
5
The iMac 27’ is a computer that can do everything you need it to do. If you are into music creation it can do that and handle it with a breeze. Or if you are into film and editing videos it can do that. Even if you just want to use it as a regular computer then it will work super fast for you and you will love it. When I comes to getting a new computer you really cant go wrong with a mac, and you really can go wrong with the 27’ iMac. The iMac has just swept the digital world off its feet over the last few years with how powerful and fast that it really is.

There are some faults with it though even though it’s an expensive computer that doesn’t mean that they put all the expensive parts in it. For instance the graphics card is that well. If you are into gaming you will be shocked on how it seems like they left that part out (putting in a really good graphics card) . There are also some software bugs in Leopard , though I havent run into them yet (knock on wood) people do say that they exist.

Overall, you will love the iMac 27’. You might want to go with one of the cheaper ones though maybe one that has less ram or a cheaper processor or less gigs because they can get pretty pricey. A lot of times with mac or any computer maker for that matter I think you are paying for the size of the screen. Seems like all people care about now is how big things are and if it’s a big bright screen people want to buy it. If you are on a tighter budget look at some of the smaller screened macs. They will still run and do everything you need them to do but they screen wont be really big like this one and it will be cheaper and more affordable too.

Apple iMac 27"
5
The 27’’ iMac is the latest all-in-one computer that Apple currently offers at the time of writing this review. The one I’m reviewing has a 2.7 GHz quad-core Intel Core i5 processor, 4 GB of memory, 1 TB hard drive and an AMD Radeon HD 6770M with 512 MB of RAM.

First off, the design itself is beautiful. It takes cues from the iPhone, but it also has its own thing going on at times. When you turn the computer on, the first thing you notice is the wonderful IPS display. This display is extremely true when it comes to colors. The display resolution itself is 2560x1440, so there’s tons of space. In fact, I believe this might even be the same monitor that is used in the 27’’ Apple Cinema Display, but I can’t say for sure. There are various upgrades you can do, but I find that this 27’’ model is the best in terms of performance and price.

The OS that this comes with is Apple’s latest OS 10.6 Snow Leopard. The OS is an upgrade of the 10.5 Leopard OS, and it now supports full 64-bit native applications. Not only does it get a bit of a revamp under the hood, but the Wi-Fi is greatly improved. That was a huge issue with 10.5. The Wi-Fi was broken or whatever reason, even up to the latest update. They seem to have fixed the issue with this model.

The graphics card in this is a pretty decent one. It’s not top of the line, but it definitely gets the job done. The one on the 3.1 GHz model is a bit better, but they’re all still mobile graphics cards. Don’t expect some insane frame rates if you’re into hardcore gaming and trying to max out Crysis, but it should get the job done for most people.

If you’re in the need of a new Apple computer and want a complete package, check out this model. It sure surprised me how nice it actually is, and I currently have one as my living room computer.

Apple iMac 27"
4
With this imac 27 inch computer you get a brilliant display of high definition lcd.
It is a great computer as well, it performs really well with a lot of different programs up, we like to use skype and watch youtube and all that stuff and we have no problems with it not performing to how it is supposed to, I like to watch dvds in high definition on the monitor as it really grabs you in with its beautiful display.
I dislike how macs have to be differently set up in comparison to windows computers though such as the cross to close being at the other side of the window which is just a little thing that annoys me but I will eventually get over.
Games run really smoothly on this imac and look great, everything seems so real when playing a game on this computer but you will have to buy a mac compatible game which is annoying if you used to have a lot of windows games.
The sound quality from the macs speakers alone is great, we have our mac hooked up to some other speakers though which give a great sound but the mac speakers really do have a great sound.
The value for price is ok I guess... I mean they could make it cheaper but then that would not be so mac now would it?
I have had numerous computers and I have a laptop mainly for production but I have to say that this imac is very good all in all and worth a buy if you want a great computer for every day use.
Whilst the 27 inch screen is glorious I still feel as though it is rather big and you have to zoom in on web pages to actually get the full effect if you are just browsing around on the internet.
Did you find this review helpful?yesno
»

La_Zouille's review (This content has been automatically translated from French)

Apple iMac 27"
4
I have always used Apple machines.
This last IMAC, I use it for 3 months.

This machine is complete, it is a bit expensive (I've taken all the options) but it lasts longer than a PC.
What motivated my choice is that, mostly driver problems are very rare in the PC report. Nstalations the software are also less dangerous.

I said that this machine is dedicated solely to sound and video.