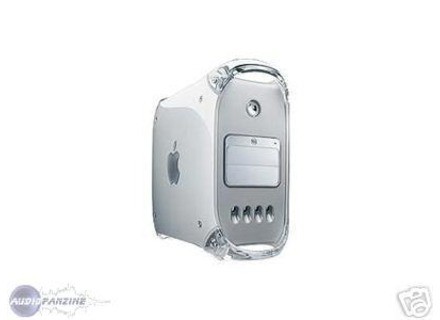 All user reviews for the Apple PowerMac G4 2x1,25 Ghz

Average Score:4.2( 4.2/5 based on 4 reviews )
Not satisfied with those reviews?
Our members also liked:

jooo37's review (This content has been automatically translated from French)

Apple PowerMac G4 2x1,25 Ghz
5
I love ... Although the fan to be noisy because it is a TRS MODEL shooting all Premire sries (Apple changed them for free but I know qu'prs t, damn ..).
This is probably the only Mac that I will keep up that spare us death. It is super smooth. I have a lot of single-processor 1.8GHz G5 ct. They are comparable in terms of rapidity for opration ds as a simple but is complicated (video, multi-processing tasks, etc.) I put the G5 to sleep and I'm working on this G4. We can make it do whatever you want, there's always rpondant.
I could work on a G5 2GHz dual processor, Final Cut Pro 4 HD. Frankly, for the diffrence investment was not worth the time. Even in video compression, it is not obvious ...
His only default, which have rpondu G5, it is the rear USB ports. Pffff .... when it was not practical in a box or under a table.
Its main strength is all that can be put in! Personally, mine works with 4HD, 1 AGP, 4 PCI and 2 GB of RAM. There are still two free connectors for connecting internal devices like optical drives in addition to the burner. Even 2HD supplmentaires, which would make him the Mac as "big" (eg.: 6 HD 500GB = approx. 3TB internally!)
In short, I do not think well of him. In 2006, I think it's a machine that is still worth to be bought in time, because everything runs well on it and the price is relatively low compared to the second hand market in MODELS G5.

rossocorsa's review (This content has been automatically translated from French)

Apple PowerMac G4 2x1,25 Ghz
5
-15 Months
-The +: trs stable and fast. The -: nothing!
At least twenty-one between Mac and PC.
Max-Quality, price.
"I intend to keep until his death by natural means ....
Did you find this review helpful?yesno

Apple PowerMac G4 2x1,25 Ghz
5
I use it since December 2003. The fact that there are two processors and some soft drinks such as audio or Altiverb Digital Performer are on Mac, have influenced my choice. In addition, the Setup AudioMIDI is very practical for computer music, as Expos. Also the fact that it is bootable in OS 9 and OS X is trs enjoyable for certain applications.
Before I had a PC, trs trs good too, I just want to change a little and have so some apps, I also install Virtual PC 6 for some applications I can not do without.
The report may not qualitprix not seem as top Power Macs have no guts and for 1760, but there is a dual processor, you can put up to 2 GHz of RAM, multiple hard drives ... It is also the culmination of the line G4. Personally I do not find it noisier than my old PC, some models can be dodgy have fans?
I do not regret my choice, trs OSX is stable, and both processors allow me to open a plthore plug ins, altivec also seems to do its job.
I, who loved tinkering around in my PC, when I opened the hood, has me a little reminder that the very first time I walked into a Mercedes, indoor architecture is very s well tudi the son and tablecloths are all place, modifying or adding components is trs boards. In short it is the high-end quality and feel IMMEDIATE.
I think my future will be buying a G5 (replacing this one), is whether Apple and its 1.8% market share will be some prnit in IT (this era are iPod type gadgets that make the bulk of sales) to continue interest to developers (there's no life in that Emagic ...).
Note also seems to me Previous trssvre, so go up the hop.
Did you find this review helpful?yesno

didiervdb's review (This content has been automatically translated from French)

Apple PowerMac G4 2x1,25 Ghz
1
I who possd many apple since the 80's, I changed my G4 800 rcemment against a bi-pro 1.25 and then l. .. what a surprise, first on the price on all software change: photoshop, illustrator, office, x-press, LiveMotion, and so on ... - My opinion is a triple bof, the Systm os x is certainly trs ergonomic, but many features are missing. As the rapid and varies little. For example a PowerPoint file with video and flash is faster on the G4 800, and yes, I kept ... I bought to compensate for Keynotes, although incomplete, but in automation views from powerpoint. Short notice more than mixed.
Did you find this review helpful?yesno
Cookies help us improve performance, enhance user experience and deliver our services. By using our services, you agree to our use of cookies. Find out more.