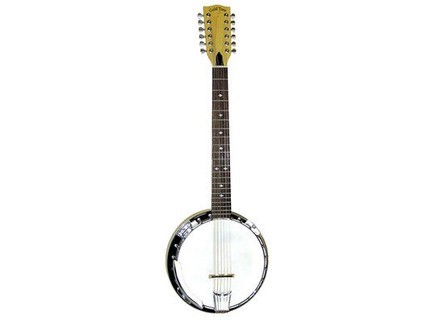 Gold Tone GT-1200
5
The Gold Tone GT-1200 is a 12 string banjo that has the same string configuration as a 12 string guitar, so I guess this is really as 12 string banjitar/git-jo. As you can tell just from this brief description, this is a unique instrument! I had not ever played an instrument like this until a few weeks ago when I tried one out. Obviously I was struck by it's uniqueness, but upon further review I found that this is not only unique, but is an overall awesome instrument. I know it has a pick up in, but I'm not sure what the exact specifications are on it, but there is only a single pick up in it. To be honest I haven't plugged it in, so I can't really say anything about the sound of this pick up. Either way it's definitely cool that you have the option to plug it in if you want to. There aren't any setting controls for the pick up that I'm aware of.

The feel of the Gold Tone GT-1200 is outstanding. I didn't find that using a pick was as easy as playing it with my fingers. While I'm trying to get better, I'm not the best when it comes to finger picking, but I definitely found it very easy to finger pick on the GT-1200. The weight of the instrument is about right for a banjo that has a pick up in it as it isn't exactly light, but isn't too heavy to carry. Getting a great sound acoustically is definitely an easy thing to do.

The tone of the Gold Tone GT-1200 is unlike anything I've ever heard. I do own a 6 string banjo, but the GT-1200 really doesn't sound anything like it. The GT-1200 is really the perfect blend of a banjo and a 12 string guitar in terms of tone, as it is lush like a 12 string, and has the sticcato sound of a banjo. I've never had the chance to record with the Gold Tone GT-1200, but I would imagine that this brilliant sound would transfer well to the reel...

Unfortunately, the price of the Gold Tone GT-1200 prevents me from getting one, but I've definitely added this to the list of gear that I'd like to acquire someday, as I think there's a whole lot of cool things that could be done with it. It isn't like the price is outlandish for an instrument of this caliber, but I personally just couldn't justify spending this much on something like this. Hopefully someday this will change as the Gold Tone GT-1200 is a unique and special instrument...
Did you find this review helpful?yesno
»