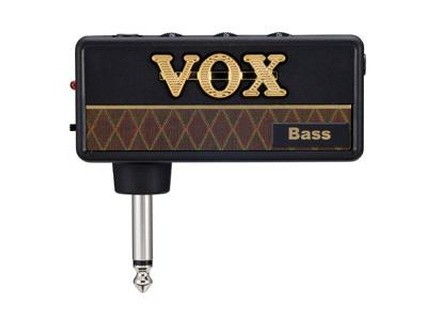 Vox amPlug Bass
5
Looks like a li'l bitty Vox head that plugs directly into your output jack. Plug in your favorite headphones (1/8 in jack)and play anywhere anytime. You can plug in a sound source in a separate jack. (PC, Mp3 player, etc. also with 1/8 in jack.)
Has multiple controls for multiple effects. Has overdrive setting.

I've been playing 4/5 string bass guitars on and off for 40 years. Have sat in/subbed for band members who couldn't make the gig/practice. Play for fun.

Got this because I needed to play silently, in spaces much smaller than a stage/garage.
Got it online at Musician's Friend, at approx 50 bux just after Christmas 2009.

I like the size, the 2 jacks, the amount of adjustment on such a small unit. It fits VERY snugly in the jack of my current knock-around bass,(Rogue LX205B Series II)Could carry it in a pocket or in the guitar case, as compared to my Carvin stack... Which you could't...

Nothing to dislike so far...

Made of metal/plastic and seems pretty solid, but I wouldn't want to try to break pavement with it... Treat it as you would ANY peice of quality equipment.

So far it has done everything I was told it would do and what I expect it to do.

I rate it Doubleplusgood.

Vox amPlug Bass
3
This handy gadget is made to look like the classic diamond-grillecloth Vox amp heads that the Beatles made popular. It's designed wit 90-degree angled 1/4' plug to be plugged straight into your bass. An aux input and headphones out allow you to play along with music without having to drag even a small practice amp long. Normal and FX channels. Runs on AAA zinc-carbon batteries (included) or alkalines. I've played bass for 45 years.

The amPLug is brand new but I found a dealer who had picked one up at NAMM 2010. List price is $64, street $45. Didn't buy it because I have a headphone amp already.

It's tiny -- fits in a gig bag easily or even in a shirt pocket. It does what it promises: easy access to practicing or playing along with music without bugging your neighbors. sound in the normal channel is quite good. FX? Meh ...

The FX sound -- selected with a switch -- is not that great, basically distortion. Switch is on the bottom of the unit -- hard to access when plugged in. Although other reviewers stated that the unit popped out of the bass jack easily, that didn't happen to me.

Appears to be solid.

If you need a low-cost headphone amp that will accept a CD/MP3 player, the Vox amPLug Bass Headphone Amp could be the one for you. Inexpensive --around $50 -- it plugs directly into your bass for silent practice. If you travel and spend lots of time in hotel rooms, this could be ideal. Decent sound from its normal channel, less than ideal from the FX channel. I rate it 3 because of reports from other reviewers that the unit pops out of the guitar jack, although that didn't happen to me.

Vox amPlug Bass
5
If you are a bass player and you cannot play the bass in an apartment of something where there are thin walls or being quiet is an issue than this is your tool. I know that bass can travel a lot further sometimes than a guitar can since the low end frequencies can travel and literally shake the walls. My wife constantly tells me to turn down the bass because she can feel it all the way downstairs. This is the devise you need to curb your thundering low end in a home that is not capable of killing the sound or dampening the feel of your bass amp.

The tone from this thing is the most impressive thing to me. When I think of these modeler amp which this thing is sort of, it is a modeler with one tone but it still replicate the tone of a solid bass amp. The tone is thick and meaty that give playing a whole new dimension.

It sounds great going into a recording device or a computer. It actually sounds best in the computer application than it would with headphones. Just grab your favorite bass and quietly play along without any interruption.

This thing is that good! It really does sound alike a full bodied bass amp that is throwing our 900 watts of raging power. The voicing of this device is just perfect! The tones and notes just come through so well. It makes playing bass fun.

At new these units come in at around $50 which a little bit higher than the other pocket amps from Vox. The tone is based off of the Vox AC100 and it captures it very well in my opinion. It has an FET buffer circuit so that probably constitutes the extra $10 for this amp.

I use a passive fretless Luthman Wave. I love the bass sounds such rights, the amPlug makes a significant color distortion but not unpleasant that will please those who like more distorted sounds. FX mode is in my opinion irrelevant. The breath is important at high volume.

I've had two days. It can play in any room of the house and go on holiday with low hanging without an amp.

But I do not use daily: the headphone plugged into the amp is much better. To play with a player: like, interesting travel, otherwise a small mixer with a preamp, which is also on the lower branch is not much more expensive (in time) and it is as well.

It's really a nomad accessory therefore reasonably priced, but not absolutely replace a real amp, even for work headphone.

The buy? Why not to take the bass on vacation. But I bought it more as an interesting alternative to connect the headphones to the amp, and on that side I planted. Anyway, I keep it anyway.
Did you find this review helpful?yesno
»
Read the 13 user reviews on the Vox amPlug Bass »

Other names: am plug bass, amplugbass