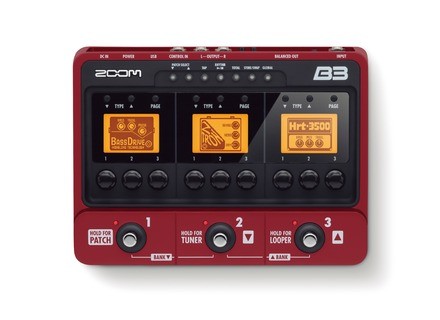 B3, Bass Amp Simulator from Zoom in the B series.

View all offers for Zoom B3 »

raph.bass's review (This content has been automatically translated from French)" Good tool"

Zoom B3
5
111 effects and different amp simulations.
All editable computer using the supplied software and USB cable
Any digital
Connection standard: In jack, Out L and R jack, DI out, USB, etc..

Usage is very simple. The direct access to the settings buttons make great settings. The manual is comprehensive and clear, even if the grip can be done without.

Effects, without equaling analog effects are good.
There are not too many superfluous, everything is still very usable.
I use it as a multi-effects with an amp behind or direct connection to a console with an amp simulator.
In any case I'm happy.

Used for a few months now.
Not worth analog effects but I was tired of lugging two Pedalboards 15kg each and it does very well the job.
The DI is quiet and quite usable live.
In the studio is still better keep your favorite analogue effects, but for live it is very convenient.

Zoom B3
4
as the previous review, I am pleasantly surprised by the quality of this product, zoom in general, possessing a G7 1UT-guitar
very simple, excellent comp, the modeling amp, it's not quite that, but it looks like from afar, if you do not compare with real amps, emulation gallien rb800 is zero, it looks more like a 600 bassline, I possess a body rb800 3 ....
but this is a very good product for 169 € almost unbelievable

carimbabar's review (This content has been automatically translated from French)" very pretty!"

Zoom B3
4
Found on virtually every major animal families effects, with 4 or 5 different versions of the preamp, the amp simus, from Eq, of Rgb, of delays, synths, wah, deffreter among others ...
Each effect is individually editable as if you're working three pedals. Each pedal has 3 knobs and 3 switches to navigate between the pages or the effects thereof.
You can access the settings via a freeware on the computer, visual and practical enough where you can rename and move the patches, for example.
The B3n'est not rackable.
It is fully digital and has the usual audio connections, and XLR jack for DI output and a USB to communicate with the computer and also become an audio interface.

The config could not be simpler, it's like having 3 pedals connected to which you assign what you want.
The manual is well designed, and details the effects, their parameters, and some tips.
Editing sounds is pleasant, and can be refined in almost real time.

I like the EQ, compressor and phaser, I need a little time to handle the rest and have an opinion, I used it on stage and in a bar or two, nothing to say it works! Fun aves synths and phasers, I like least octaver
The quality is light years previous brand products.
I use it with a jazz bass luthier and a Fender 71.

I've had less than a month, and I still have much time to spend on it, there are so many possibilities. I have not tried other models from old models or GT6B quite old, not really excited ...
I like the way access and individual pedal sounds, I do not like the failure to be able to chain effects that three or navigation of a patch to another while playing, but hey, you need to plan and it goes very well.
The value for money seems excellent, given the number of effects and their quality is not bad, especially since it was the coup as a looper of 40s, a drum machine anecdotal, but for practical work, a lot tuner, and a sound card! I have not tried the soundcard yet (I have an RME), but for someone who wants Laying out ideas quickly it should do ...
I have not been around, I really like for now we'll see in use. If it all over again I would reiterate
But I think a model with more pedals should appear since the G5 was released recently ...

Published on 01/20/12
The B3 Bass Effects and Amp Simulator Pedal combines a stompbox pedalboard with a multi-effects pedal and USB audio interface.

Zoom B3 manuals and other files