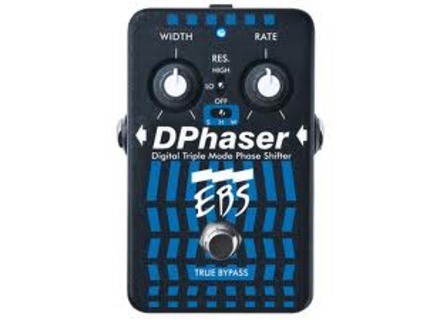 Dphaser, Bass Chorus/Phaser/Flanger from EBS in the Black Label series.

View all offers for EBS Dphaser »

EBS Dphaser
4
EBS is a great Swedish company that focuses their attention to the needs of the performing bass players in the world. They have built a solid reputation of high standards and high quality units that are competitively priced and competitively voicing against many of the more prominent companies.

The tone of this pedal is remarkable. The pedal is built with highest quality components and uses 24-bit digital processing circuitry for outstanding performance on stage and in the recording studio. You can definitely hear the sound that comes from this pedal is of the highest standards of quality that exist.

Use this is front of your bass amp since the phaser generally sounds the best in front rather than in the effects loops. If you do run it this way run it only slightly because the pedal can dominate the sound of your tone and a phaser on all the time is not a pleasing sound.

You can find these pedals new for right around the price of $200. not a bad price for solid sounding bass phaser. You will get a high grade pedal that will last you gigging night after night. This is a pedal to have if you really want a good quality built and sounding phaser.

I would recommend this pedal to any bass player who needs a good effects pedal in his signal chain that will enhance the tone quality of his or her rig. The pedal will add a good harmonic and effects tone to your sound and with the help of this pedal you will be pleasantly surprised how it enhances you playing experience.

Dbman's review (This content has been automatically translated from French)

EBS Dphaser
5
Phaser digital, true bypass (ie the electronic pedal is fully short-circuited when the effect is not active: no sound coloration, no parasites so)

The settings are typical of a phaser: modulation range around a frequency defined (WIDTH) and speed of the oscillator (RATE).

There are more than two selectors. The first adds a feedback (feedback signal) moderately (Lo) or a greater proportion (Hi). It may simply be disconnected (off). The second selector selects the number of phase shifts: 6, 10 or 18. An internal setting (under the plate) can change these values: we can pass the value of 6 phase shifts at 4 and 10 to 8.
Under the plate, it is also possible to change the sinusoidal oscillator triangular. Another switch is used to prevent the modulation frequencies below 130Hz. And finally, a potentiometer determines the center frequency around which the acts WIDTH button.

It is better to avoid changing the factory settings initially to become familiar with the effects and know exactly what was looking like her. The combination of settings on the front offers enough possibilities.

Configuration is very simple. One easily adjustable sound suitable for a very present until a more discreet but very sharp.

Pick a game to increase the effectiveness of this type of effect (such as flanger or chorus) that enhances the midrange and treble depending on the setting (which promotes the clarity of the bass into the mix).

The English manual is simple and clear.

The result is very good and clean, like everything that EBS. I play primarily on Precision. I do not use all the capacity of the fact that I turn very often: I do not shoot. I rule to be relatively unobtrusive. It brings the resonance and growl very sharp very effective.

With high settings, it picks up and it does sound more than a "water" absolutely useless, except in slick sounds weird, but of no use music. However, for anyone who wants a very marked effect, sensitivity settings is more than enough to avoid drowning!

Before you try and buy as dry this, I used a flanger (BOSS BF3), too far to be used all the time. The phaser is relatively close to a flanger, but that is both its ability to be discreet and grunting which is the interest of the former. I also invested in a chorus, just to gain option, but I think the chorus is too little incisive. I sold the chorus, flanger, but I keep offering other opportunities more "envelopes".

Note that the cumulative effect flanger / phaser does nothing. Depending on the settings, one takes precedence over the other and that's all it comes out.

I use a disto (EBS also) sometimes more (in the loop). Thus coupled, if the flanger can cause a very big effect enveloping and very audible, the phaser can uniquely enhance the effect of distortion.

This is a really good pedal, very effective, for which I immediately had a crush test. I play mostly rock, and I use it in a range that allows you to place low in the mix or to add color to parts only low, but its capabilities also enable it to use more electronic.

See all 80 photos of EBS Dphaser »

View all 7 videos of EBS Dphaser »