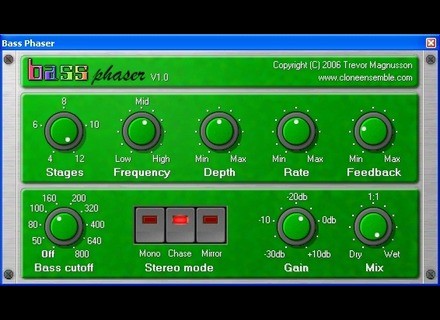 Clone Ensemble Bass Phaser
4
Clone Ensemble's Bass Phaser is a free plug-in for Windows that comes in VST and Direct X plug-in formats. Unlike some of Clone Ensemble's other plug-ins, this one is all free and doesn't have any restrictions on how you can use it. I'm no longer running a compatible system for it ever since I made the switch to Pro Tools on Mac from Cubase SX on a PC. I don't remember much about installing it, but you can download it straight from Clone Ensemble's website and should be easy enough to install after that. The plug-in is also pretty straight forward to use, with parameters for feedback, rate, depth, frequency, stage (five to choose from), bass cutoff, gain, mix, and a few different stereo/mono modes to choose from. I doubt a manual was ever put together for it, but could be wrong about this.

For the time I was running the Clone Ensemble Bass Phaser plug-in, it was in Cubase SX 2.0 mostly and later in 3. I had everything running on a Hewlett Packard Pavilion dv8000 Notebook that was made up of a 3.0 Ghz processor and 2 GB of RAM. Certainly not the best system, but when I was just getting starting with recording, it got the job done and was certainly enough to run this plug-in smoothly. I honestly didn't use the plug-in all that often, as it's pretty specific in terms of what it's designed for, but never had any problems running it.

The Clone Ensemble Bass Phaser is the type of plug-in that you might as well have around being that it's free. It's nothing too special in my opinion, but serves it's purpose and is a decent enough phaser for a free one that's now a few years old. Obviously, it's designed for use on bass instruments, so I haven't tried it on anything else. For bass guitar, it sounds pretty full but I didn't find myself needing a phaser on bass too often and still don't. Since it's free I'd recommend downloading it if you have a compatible system, but it's not a necessity at all and is really just worth having around for 'just-in-case' scenarios.
Did you find this review helpful?yesno
»