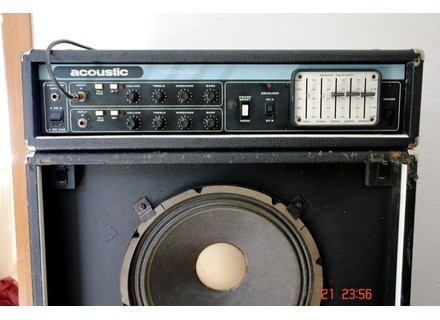 raph.bass's review (This content has been automatically translated from French)" A Monster!"

Acoustic 320
5
Any transistor amp, 300W into 2 Ohms, two channels that can mix or use sparment, a 5-band graphic eq, simple effective.

Than just here, not making head turning knobs 20 in all directions. So that rglages basic but effective sacrment. Both channels can be to have two DIFFERENT sounds (slap the other one finger for example) or to mix two sounds (a clear one or saturated with effects in the loop and the other clean) or still connect two each with its low SETTING THE sound.

It is ideal any style of music. I plug in Acoustic baffle 408. Warning, do not expect any of the same to get a modern sound with this amp, it dates from 1978 and can be heard. I jou with Fender PB 4 and 5 strings on it, a Musicman Sterling 5, a 6 Noguera Expression, and with a string of effects. The two channels with their effects loops spares allow infinite possibilities when using many effects. He never of.
The only "ngatif" I could give is that you play in rooms consquentes enough to use it. adpote! For example, I jou cinma in a room of 400 seats with guitarists, drummer, percussionist, keyboards, brass, all as set out in a sound system. I jou when me without being taken over by the sound and volume 2 of the amp and you hear me trs trs well. pushed really hard!

I use it for 2 years now. In this template I had tried the traditional Ampeg Classic and an old Trace Elliot forgot the MODEL.
The Acoustic surpasses the power but also the mojo. Change anything on this amp, everything is perfect, and it's not for nothing that the greatest bassists of all used 70's Acoustic amps.
Did you find this review helpful?yesno
»