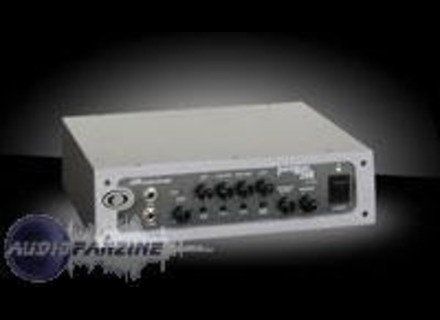 Ampeg PB250
5
It's a 14lb 250W head, which is not really a lightweight in these days of transformerless amps, but for a transformer amp, it's 1/2 to 2/3 the size and weight of many of its competitors.

I don't need a lot of power. I do have some more powerful heads, but only for certain features they offer, as they are not hugely more powerful than this one. I play in small venues, small ensembles, no drummer, so power is not an issue.

I got it at the local GC when they clearanced priced it cuz they were no longer going to carry the PortaBass series. I don't recall the price, as I bought the head and 3 PB cabs all together.

It has the familiar Ampeg sound, similar to my Rocket 100 combo. With a 12' PB series cab this is especially true, and the head+cab only weighs about 1/2 what the Rocket 100 does. Also, has no fan noise [no fan]. Many small heads have noisy fans which prolly bother the player more than the audience.

The controls are fairly complete, but not confusing ... easy to adjust while playing. One of the best things about the controls is the FX loop. There is a front panel blend/balance knob that dials from 100% FX to 100% instrument input, with a 50-50 mix at the center position. This is so much more useful in so many circumstances compared to the usual other FX loops, which have either an FX level knob [almost as cool] or no control over the FX loop [uncool].

I've had it several years and it was a lightweight when I bought it, but now it spends a lotta time in the practice room while the D-class [1/3 the weight] heads go out to play.

The infamous brilliant blue-white headlight is annoying, but easily dimmed down with a dab of paint ...

Otherwise, no complaints at all.

It's been very reliable, and feels solid when toting it and when using the controls and jacks. It has none of those black plastic jacks, which is good news these days. It's a USA-built unit, and it's obvious.

I used to gig it regularly, but now the lighter heads go out to play and this one wound up in the practice room. The FX blend/balance control is especially great for practicing along with recordings. The small mixer board in the practice room has now fallen into disuse.

I'm rating it a '5', not cuz it's the best amp in the world, but cuz it has no real flaws, has been 100% reliable [not really heavy use], has easy and versatile controls, and just does exactly what it was built to do: it delivers the familiar Ampeg [non-svt] tone. After several years, the pots are still smooth and quiet.

You really can't lose if you find one of these. They are no longer built, but they turn up used occasionally. The GK RB400-III is a more commonly available [used] alternative [as to power, size, price, etc], but if you get the chance to compare them, the Ampeg has a 'sweeter' sound, no noisy fan, no plastic jacks, etc etc.

Ampeg PB250
4
Guitar Center in Colonie NY US $350 for the
floor model, documented as new, under full warranty, because Guitar Centers decided to
cease selling the Portabass series.

It's got an AC power pilot light like an
aircraft landing light. You KNOW when you
leave it powered on.

Cannot operate at less than 4ohms.

Costs more than Acoustic Image amp of same
power, but Ampeg is 3X heavier
Did you find this review helpful?yesno
»


Light in weight and compact, suprising power and tone out of a small box.

Why lug around a heavy amp when this PB 250 does it all. If you need more power it has a DI out.

Ampeg PB250
5
I bought this unit in October 2003 from N-Tune Music. I blew the speaker in my GK- 200MB, and the estimated time for repair/replacement was longer than expected. I had a gig less than two weeks away, and I had read good things about Ampeg. I had been researching the Portabass series for some time. I also purchased the PB 212 cabinet at the same time (see separate review). I paid approximately $550 for the PB250 head unit.

I LOVE the portability of this amp! The head weighs approximately 14 lbs., and it pumps out a healthy 250 watts RMS, which is more than enough for the venues that I play. I haven't tried it outdoors, but I'm looking forward to it. Due to the unit's small size, I can put it in my shoulder bag and go. Also, my upright bass sounds smooth and clean through this unit using a Fishman pickup with NO preamp. Finally, I like the bright, blue power switch in contrast to the usual red or amber switch.

I'm not sure why, but the amp has no headphone jack.

There are two instrument inputs on the front of the amp (0db and -12db) which has been a very useful feature. The head unit weighs approximately 14 lbs., and it pumps out a LOUD 250 watts RMS. The knobs are clearly labeled and very straightforward. There are rubber feet on the bottom of the amp and on the side, which is very cool because you can set the amp horizontally or vertically. The unit is rugged, yet elegant in its simplicity, and flexible in tone control, adapting very well to the different styles of playing (Latin, jazz, funk, gospel, country, etc.). The sound is very clean through the Ampeg cabinet that I'm using. And again I liked it so much I'll reiterate: I dig the bright blue power switch.

The PB 250 is a great amp for any bassist that is looking for a powerful head unit that is small, lightweight and attractive (in my opinion. I expect this unit to serve me well for many years to come.

This review was originally published on http://www.musicgearreview.com
Did you find this review helpful?yesno
»
Read the 7 user reviews on the Ampeg PB250 »