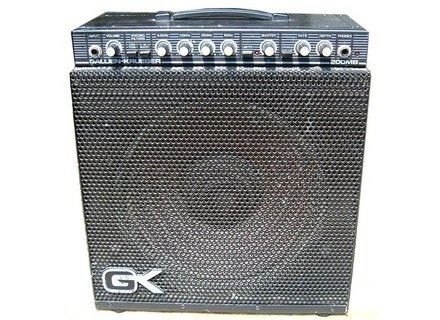 I've been looking for an MB series combo,
preferably a 150, but used MBs are scarce
and a 200 is what I found locally.

I played for about an hour at Hermie's, as
they have a miserable returns policy, and
other than scratchy pots it was great. I
had them clean the pots and I bought it.

It's about 13x15", barely big enough to
hold its 12" speaker and the electronics
section. Weighs about 25lb. Run 100w RMS
and sounds great in a small venue.

For a combo in this power range, there is
nothing not to like. I suppose I could
complain about the clutter of controls for
features I don't need. OTOH, I'm getting
to sort of like chorus and compression ...

Speaker is 12", no horn. Headphone jack
is not interlocked to speaker.

I think it's by far the smallest 12" combo
I've ever seen and that's really what it's
all about. Sounds better than some larger combos, but it's no Ampeg 15. If you play ad hoc friendly get-togethers, the small size and decent power give you a no-fuss
plug-n-play ability for spontaneous jams,
yet you can easily, and reliably, gig it.
To do better than this, you'd have to go
for an Acoustic Image at double the price.

Marchal's review (This content has been automatically translated from French)

The settings are many and very effective.
The are obtained are very different depending on the settings.

All basses sound different in this amp.
It's rich, warm, ... !
Amazing compared to the volume of the beast and super powerful.
A reference to the size and the same regardless of size!
A small volume (in room), the sound is very good and usable.

A legendary amp for appropriately priced with excellent sound!
Did you find this review helpful?yesno
»

Idfp's review (This content has been automatically translated from French)" A must for small club combo, a true marvel of sound"

Gallien Krueger 200MB
5
transistor amplifier with a compressor (single) chorus both commanders via the foot pedal. power must be 70W to 100W with external speaker. Frankly it's 70W of real power, as saying that it develops much more tuned in comparison with other amp. This makes sense, since the power is one thing, but the impression of power is directly related to the sensitivity of HP.
So small Jazz Club style etc is perfect with a drummer + guitarist. If it knocks a little more, just add one more box and it's perfect.
Level adjustment is happiness, there are all what you will, Di XLR, EQ, EFFECT SEND RETURN, DRY DI out POST and PRE EQ etc.. All this in a very small cube. The EQ is very sensitive, for cons, I was not able to know if it was a 4-band EQ with + or - 15dB boost or just a 15 dB, I do not know where is the zero (or at noon to the left.).

The config is very simple, you plug and it works, the number of possible connections is welcome, there is always a solution to retrieve or send audio to the amp. All with a sound quality quite remarkable.
I read the opinion of SlapKid on this amp and I can only say that he probably has a faulty amp or hacked, the mine well and sounds even if it is metal, does not vibrate absolutely not. To the right is simply because it is a joint insulation between all the wall of the amplifier, so that each screw locks the wall and seal the same time. If an amp buzz, it may come from the bass, which captures the 50 Hz or 100 Hz, otherwise, the receiver has a concern. I personally do not have that problem is one of the best amps I've had compared to the price. I played on the Polytone, Fender's, the MESAboogie (400 +) and so on.
Then it is true that to disassemble the amp, there are many screws, but I find it comforting, and above all, do not remove all the amp to change HP's twenty screws to remove and it is all. It is much better than the big heavy chipboard screws screwed. it is true that there is not much room, but it makes sense, if you want to do a little amp.

So what really makes the most of this amp, in addition to connectivity options, it is the sound, so much that I bought a head 800Rb later so I felt I had found the amp of my dreams. So I have the MB200 for home and small clubs and 800Rb to send heavy.
Sound levels, if you want to play Death Metal Trash, ouliez the MB200 is clearly an amp with finesse and simplicity of adjustment, a wide range of sound, it even accepts 9V pp input. This is clearly an amp for Jazz, I have long used a Warwick fortress one 4 string with it and that's fine, the sound is at once neutral if you want or boosted as desired (efficient EQ) same with a bass. on the other hand, since I was a Fodera 4 string, the sound for me but now I think the bass is also something

I stayed true to GK for 20 years, their vintage stuff is really good. I have more reservations about what comes now under the brand, even though I have not tested, except perhaps the MB150 which is not bad, the series does not inspire me too backline without really knowing why.
In fact I buy 3 MB200, one at the time at full price and two later for the stock. I had a lot of amp hands, poytone, Fender BXR300C, MESABOOGIE 400 +, Glokenglang ...
I completely remake the choice of MB200, besides, I always seeks an opportunity for any components.
Incidentally, the price of this amp seems at least very high for some time, much like the Polytone. Frankly I bought two MB200 at 60 euros each, it's a good price, but even if the amp is quite good, do not put more than 100 euros in this type of stuff old.
Especially since many of these amps generally have the HP HS after storage in humid conditions etc.
If it is to put 300 to 500 euros as I have seen sometimes as many see the side of the MB150 or otherwise.

SlapKid's review (This content has been automatically translated from French)" Rattlesnake!"

No background noise, but the amp buzz physically (mains frequency transformer I guess), but nothing surprising really annoying.
The buttons look great, no noise, and therefore good resistance remain there or have been resolved. Jacks could hook more, but again nothing to complain to the function.

Everything is simple and effective, the main entrance on the other hand is quickly overwhelmed (it is possible that it is intended for a passive piezo bass too), beyond nine hours it twists pj bass yet passive.
The limiter is quick to quickdraw, slap it goes in but otherwise it's not the top of the genre. Canbe cut.
The chorus is beautiful, keep your pedals level they are far behind her.

A Fleshwerks, but why? Ben I have never seen worse built, screws around (brace yourself: the parker in metal! Is anything, besides turning into full-Camembert) and everything is tied so absolutely reverse any duty to change the hp (53 screws ...).
Of course the machine vibrates not healthy, I redid all the stuff in M4 and I still have the vibration problem of finding a more compatible hp is a puzzle (Eminence Gamma 12 will both great sound and performance level that the closed volume available, thank you SlapKid).

And it's a shame because the sound is the opposite of the material, warm and round and music.
With my fretless five is great to play on this (spurious resonances apart) and with PJ4 because it's fun to slap very coated.
All settings are relevant, you can really fit all with this combo.
Reservations about the vibration noise (4th string of the box for example) rotting life.

On external box that's better of course but the main interest of flies foo ...
Power remains too limited in 1x12, a 3x10 is better but it leveled off quickly, and after a while everything crashes and are more dynamic yuck.

We share the idea that it not vibrate normally, sound is very good at the base.

Compared to my roland cube 30 bass you wonder where did hide the 35 watts and more ... But this cube is a particular phenomenon seems it.
Compared to my late Bebert bx450 is much better eh, no matter the age of gk.

It was even tested with a double bass, and was afraid that everything disintegrates as it vibrated everywhere!

In short, given the problematic construction I can only advise these combos GK metal, especially now that GK has released a compact combo wood 12pouces 200w real (no box to add) and 12kilos for third the price of metal ...