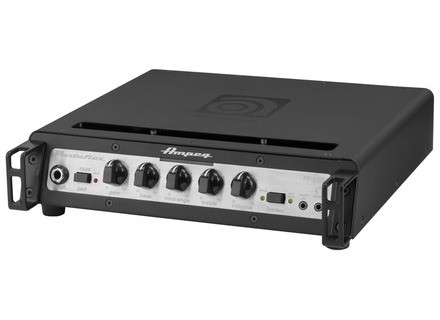 Ampeg PF-350
3
In 2011 Ampeg set out to corner the lightweight mini rig bass market. I got me hands on a PF 350 head to test drive. I had high hopes for this head. I have an SVT210 AV cab that I love, so seeing as these would match perfectly I had my fingers crossed.

A local shop shop that I am in cahoots with is an Ampeg dealer. I got this head as soon as it was available to the public. $299 is the street price.

It is very light in weight. I can toss it in my gig bag and go. The knobs are simple: Gain, Bass, Mid, Treble as well as a master volume knob. There is an XLR out in the back in case you want to go direct into a PA or recording device.

Lack of power. This bummed me out greatly. It is rated at 350 watts at 4 ohms. The cab I was using was 8 ohms but still that should give me enough juice to play out live in a small bar setting.

Looks nice, it's light, but could probably take some abuse. I've only had it a few weeks and don't use it much since the insignificant power ratings, so I cannot comment too much on if I think it will stand the test of time.

Bought it, had hopes, but with the gain and volume both at 6 it is barely enough juice to practice with my band. I'm back to using my Hartke HA 2500 which is rated at 100 less watts, yet I've never had to put the volume past 3!

Joe-Rhys's review (This content has been automatically translated from French)" a beautiful and good amp!"

Ampeg PF-350
5
it is a class D transistor head made in China under the leadership of the U.S. plant.
was 350W at 4 ohms and if you have a baffle into 8 ohms, the only issue that 250w head (in my case in this trial on the baffle PF115LF which delivers 400w into 8 ohms).
for the settings, it's simple; gain, bass, midrange, treble, volume.
and it was from left to right; instrument input, "PAD" (you can remove-15DB, that's an active device), "LIMIT" (to avoid the baffle morfler écrêttages at large due to attacks more strong or nudges in slap for example), "audio in" and "phones" (headphone input to avoid bothering the neighbors late at night ..).
all this, my lord, exudes quality and joie de vivre! (really?)

I find the control panel rather intuitive and easy to adjust.
I have not read the manual before using it ...
for sound is the sound ampeg, warm, plump, deep and precise at the same time ... vintage greeting!

I think this amp is suitable for rock in general and more particularly to '60s rock and '70s.
one typically has a vintage grain; the grail, is plug in a fender precision here, it looks like James Jamerson at the big time!
I think it would do fine in my cover band U2, which is exactly the sound that'' we must!
I plugged in an Epiphone Les Paul Special and an Ibanez SR600; malgrés differences between these two bass sounds, the sound is himself vintage wishes!
what is good is that it delivers a beautiful sound, we are disappointed not even have to lower the bass ... happy!

I tried it one afternoon and it was enough to strengthen me and convince me that I still love that sound!
I have tried a lot of amps before him, I tried the Portaflex 500w and it's also an ampeg amp that I like!
what I love most; the vintage sound, the look definitely retro! (With the blue Tolex amps like the jet of the brand), lightness ... and others ...
I liked the least, that the head is manufactured in China (although I do not know if it is a reliable ...) and I have not had the money to buy it! !

Very easy to use, it plugs and one is at home.

I play on a JB (active / passive). The head complies with sound, with a signature Ampeg sound quite discreet and very clean. The sound is rich and varied mediums easily punch growl. Graves 1 hour, mid and treble at 10 am to 2 am, it's a good combination to get an idea of ​​the scope of the register of the bass by not touching as the settings of the instrument. The sound that comes out of the DI is very loyal, and the head does not move when you walk up the volume. I compensate the lack of built-in compressor by the use of a pedal (BBE Opto Stomp). The headphone output is nickel, and very useful on this type of amp.

These four months, I have used it 4 times in concert (formation of 10 musicians). I appreciate the convenience (slipped into my bag of hardware, an old carrying case&nbsp;for notebook), I gained 10kg compared to my old head and a bag to lug around less. Since I travel a lot on foot or by public transport, I really appreciate having a compact, lightweight and ... solid! So a good sound, good ID, good body and good for a small potato and a small price, it really is a concentrate of Ampeg!

Ampeg PF-350
4
it's all transistor
will see the description on the site Ampeg
for me is just right: simple and effective
I like: audio input and headphone output - XLR link out

super simple, you turn and it works

I have an Ampeg SVT Classic head config all-tube Ampeg 4X10 HLF + (4Home)
the top for her but also for the weight!
I was looking for an alternative to my head of 45 kg!
I play Fender Jaguar and / or style Jazzbass Rock (Pixies influences, GunClub, Clash ...)

Repeated with the first Portaflex: not tell anyone: the group has 3 or 4 songs before realizing e the difference.
Ampeg is very sound but clear and dry (less round) than any lamp.
the 410 HLF is not for nothing too, though.

Well it's not the same one all-tube watts! I was vol3 to the SVT, I'm VOL6 for the same power!
but it weighs 3 kg, it is small, to work only with headphones or live in small places: the top if you like the sound Ampeg
So great value qual / price stuff simple and efficient, lightweight