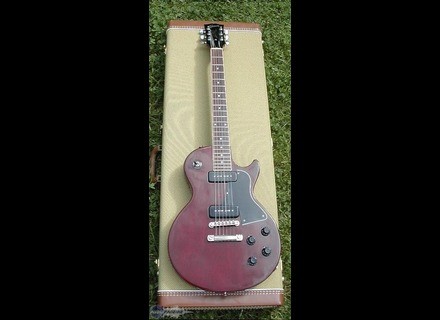 Gibson Les Paul Special
4
Purchased new for $599 in a local shop in the Bay Area.

First off, it is important to note that this guitar is played through a Fender Twin amplifier (super-clean tube amp), so my impression of the tone of the guitar is filtered by that.

I really like this guitar. I chose it because it offers excellent tone and playability for the price range. It has a good solid feel, the wood is beatiful in the clear finishes and says in tune quite well. This guitar has really good tone versatility between the three P/U configurations (neck/bridge/mix) and independent tone and volume control. All swtiching is quiet and the tone is clean, even at low volume settings. this guitar would be a good mainstay for intemediate guitars, early gigging or as a bckup guitar for more advanced players.

If you set the knobs correctly, you can get good lead tones and reasonable rhyhm tones, but it is difficult to set it up such that it is easy to switch between rhythm and lead and maintain balance. This may just be an artifact of not figuring out the best combo of guitar-amp knob settings though. It is a fairly heavy guitar and the shape makes it a bit difficult to play sitting down.

Well constructed and earns the Gibson name for a reason. Integrated neck helps with the tone and sustain.

If you are looking in this price range, this guitar is hard to beat. It offers good pickups and playability. Because the guitar is simply built, your money goes into good tone and worksmanship rather than showy stuff.

Gibson Les Paul Special
4
I picked this guitar up for $499.00 through the musicians friend web site.

Ecellent quality as you would expect from a USA Gibson.

This guitar has the same pickups as the higher priced custom and standard models. It lacks the carved top but looks great anyway. It plays just like the high end models. Great sustain!

Easy to play, solid, and simple.

It was free and that's why I have it. If I was to shop for a guitar I wouldn't buy this one.

Pm.'s review (This content has been automatically translated from French)

Gibson Les Paul Special
5
It&#39;s a little jungle in Gibson given the large number of references, especially among the Les Paul! Apparently my model was arrested in 1998, this is the Les Paul Special ( https://www.gibson.com/products/gibson/LesPaul/Special.html ) II also known as Junior because it has two pickups, made ​​in the USA. According to serial numbers not mine is from 1993: Dating the Gibson ( http://www.guitar-legend.com/datation/choix_rootpage.php ) and the Gibson site. ( https://www.gibson.com/relations/faq.html#_9._How_can )
Mahogany one piece with head tilted 13 °
Rosewood 22 frets, Slim Taper profile 60 (the finest in Gibson), marks "dot" pearl.
Mahogany body One-piece maple table but unlike Standard
Fixed bridge stopbar / Tune-O-Matic
P-100 pickups as the Gibson card, I confess I do not know if they are P-90 or P-100 ...
Grover Vintage Kluxon and not agree to holding questionable.

In short commodity quality guitar work!
In addition to the time Gibson was making a very serious price for a still reasonable, especially for this model which is at the entry level for Gibson Les Paul.
So 10

The biggest problem is access to acute
In fact instead of cutting flush with the wood handle of the box there is a border of wood ( http://img143.echo.cx/img143/5788/accsauxaiguslpjuniorspecial8ve.jpg ) ! This can probably best to hold the handle but access to acute suffers ... Already on an LP STD is not jojo ...
And like all Les Paul (and Telecaster): No bevels to the forearm or stomach (beer inside ). So after a while it was a nice red mark on the right forearm ... Superrr!
As against the handle is very easy to play for a Gibson: Slim type 60 &#39;
Also the lack of maple table makes it lighter, it approaches in this Gibson SG.

-3 Because of access to acute lamentable ...
And yet for chamfers -1
Imagine the note I put a real Les Paul very heavy .. Though they have better access to acute!
But the sound and the look is also ca Les Paul with the side rock n &#39;roll "I&#39;m down with the scraper to remove the sound"

Sound and touch are very good and has a unique character!
Indeed it is not exactly the sound Les Paul because there is no table in maple or humbuckers, so it is close once again a little less aggressive in the SG, however.

His favorite style is the Blues / Soul / Rhythm & Blues. It was the lead guitar of Bob Marley, seen also with Rich Robinson of the Black Crows and Keith Richards among others.
The clean sound has nothing to do with the layer is warmer, Blues / Jazz!
The crunch is to die, then the P-100 are simply monstrous!
The distortion is in a very hard rock (AC / DC, Guns N&#39;Roses), said that based on the preamp can make the metal! I bluffed a lot of my friends with a POD and the bass string in D major in the register&#39;s metal)
The nice thing is that the sound is clear, I would say "airy" which gives a personality and a refreshing change from the traditional humbucker distortion in metal.
Of course like all Les Paul there is "only" three sounds, but the volume and tone for each pickup allows a lot of subtleties, so we can address a lot of different styles but with the personality of Gibson and grain P -100

But even me as a rather metalheads I keep

The handle is really the most comfortable I&#39;ve played with Gibson and I have tested some one: Nighthawk, SG Special, Flyng V, Explorer, Les Paul Studio Standard.
Bought new $ 630 in the United States in 1994, I have not chosen me, it&#39;s a working relationship living in the United States who chose for me. However Mr "Rock" (his nickname) knows about guitar, and because he created the Born To Rock ( http://www.borntorock.com/ ) !
At that price it&#39;s hard to beat: a true US Gibson for the price of a Korean Epiphone

In hindsight I would do this choice, even though my tastes m&#39;orientent closer to a LP Standard or Classic 2003 Slim Taper sleeve for 60 &#39;, but this is not the same budget ...