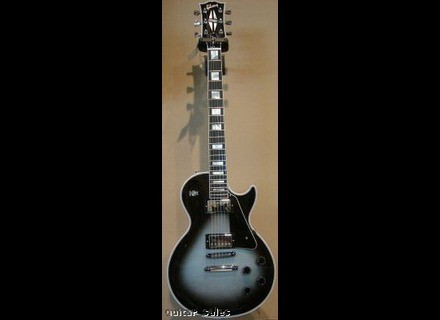 Gibson Custom Shop - Les Paul Custom Silverburst 2007
4
The Silverburst finish was one of the most requested finishes on any Gibson for a long time up until a couple years ago. This finish first came out in the late 70s and it was quickly discontinued because it would easily turn green because of the type of paint they used on the guitars. Now the finish is back and they are putting it on everything. It has kind of lost its exoticness now but it is still a pretty cool finish. This guitar has a mahogany body without a maple top. Les Paul Customs do not have the maple top that the standards have. The neck is a set neck design with a maple neck and an ebony fretboard. The ebony fretboard has 22 frets with the large block inlays. Up on the Les Paul Custom headstock you get a set of standard tuners and the bridge is a normal tune-o-matic. The pickups are a set of normal Gibson pickups. There is a 490R in the neck and a 498T in the bridge. Controls are standard as well.

The playability on this guitar is pretty good for a Les Paul. When I say for a Les Paul i mean for a guitar that by design have pretty poor upper fret access and have big necks. The Plek process Gibson does on their guitars gives them a really good factory setup. The fret leveling is perfect due to the Plek machining process. They put the ugitar into a machine and a laser is used to grind the frets down to the perfect level. This means from the factory they should already have a perfect fret level done on them. And you can then adjust the truss rod and raise or lower the action to your liking.

These Les Paul Customs have a really thick sound due to not having a maple top. This is why Gibson puts brighter pickups in them now a days. If they were to put in 57 Classics or something really PAF'y nowadays people would complain that they are too muddy. These guitars have the thick tone you think of when you think of a Gibson. The pickups are PAF based but with a very hot rodded sound. The neck pickup has more upper mids in its voicing to make it clearer when playing with more drive in modern music. The bridge is also a hot rodded sound as well. It also has a slant towards the mids and highs in the frequencies to make up for the lack of maple cap the customs have.

In my opinion these guitars were a lot cooler when they werent selling them. Back when you had to find a late 70s Les Paul Custom to get a silverburst guitar they were the coolest thing ever. Now Gibson has caught on to this and you can get pretty much any model. You can get Epiphones with silverburst finishes now. That will show how much Gibson is cashing in on this demand. If you are looking for a Silverburst here it is. I would have been looking for one a few years ago but to me now it is not as cool as it once was.

Gibson Custom Shop - Les Paul Custom Silverburst 2007
4
The Les Paul Custom has gone through a tone of changes throughout the years. The one I'll be focusing on in this review will be the one currently available on the market today. It features all of the same specs that people know and love from a Les Paul -- a mahogany body with a maple top, a set mahogany neck, 22 frets, binding, two humbuckers, a hard tail TOM bridge, two volume knobs, two tone knobs, two humbuckers and a three way switch. However, the absolute biggest change would happen to be the ebony fretboard. That's mainly the feature that makes this guitar a "Custom"

The Custom really excels in sound. Normally, Gibson Les Pauls are very thick sounding. This works great for most styles of music, but sometimes it lacks a tad bit of clarity for genres such as metal, especially once you start tuning lower. The ebony fretboard on this guitar helps add some sizzle and bite that allows the guitar to cut through the mix without sounding thin. I'm not a fan of the pickups, so I always replace both those and the pots. This really opens up the guitar and makes it not only more aggressive but more versatile as well.

If you're searching for a Les Paul Custom, be sure to try a bunch out in your local music store. The quality control on Gibson guitars can be really iffy. The biggest things to look for would be tuning stability and fretwork. Pay particular attention to fretwork as that's what can really make or break a guitar. If you're looking for a metal guitar, it's really hard to beat this thing. Just be careful of the weight.
Did you find this review helpful?yesno
»