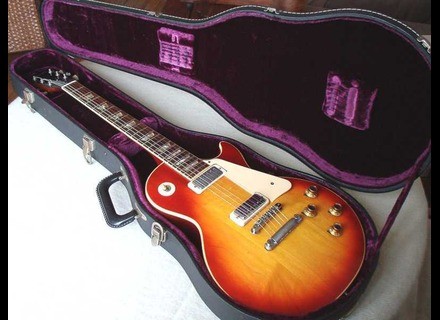 Gibson Les Paul Deluxe (1974)
4
This guitar was built around the Norlin era, and as a result, there were quite a few inconsistencies during that time. One of them was the famous pancake body that they happened to utilize on certain guitars, and this is really no exception to that. The guitar features a mahogany body with a maple top, mahogany neck with a rosewood fretboard, 22 frets, trapezoid inlays, pickguard, binding, hard tail bridge, two P90s, two volumes, two tones and a three way switch.

These guitars seem to be built fairly nice, but I experienced some fretwork issues with the one that was in the store. First of all, it weighed an absolute ton. We're talking like 12+ lbs, and I just couldn't deal with that. Gibson still has some QC issues, so you really need to play all of these before ultimately buying them. The good thing is that they were all fairly resonant sounding. That means that any fretwork issues or nut issues can usually be corrected by a competent luthier without too much of a hassle.

The guitar weighed an absolute ton, and that was the biggest deal killer for me. It sounded good, but I tend to prefer lighter guitars. I find that they resonate a lot better, and they tend to sound a lot better, too. If you are looking for a Les Paul from this era, I highly recommend you play it first. Some of them are pure dogs, but some of them are also some of the best Gibsons that they ever made...
Did you find this review helpful?yesno
»