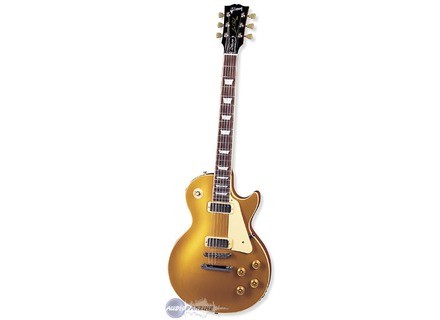 Gibson Les Paul Deluxe 1969 Reissue
4
One of the more successful P90 equipped guitars out there was the old Les Paul Deluxe that Gibson used to have around forever. They have since reissued the old, classic 1969 model which happens to be one of my favorite models, personally. The guitar features a mahogany body with a maple top, mahogany neck with a rosewood fretboard, 22 frets, trapezoid inlays, pickguard, binding, hard tail bridge, two P90s, two volumes, two tones and a three way switch.

The guitar was put together fairly nicely. There were no issues with the nut. The best way to tell is to simply play it. If you keep noticing you're going out of tune and it "pings" when you tune, that means the nut is cut improperly. The fretwork was also pretty good on this. I was able to achieve relatively low action without any real issues. The binding work looked nice, and the silver hardware didn't have any tarnish on it. The guitar didn't weigh a ton, and I found that to be a good thing as the super heavy guitars tend to be a bit dead sounding overall.

The P90s in this sounded great. The bridge was very organic sounding, and it had a great tone to it. I tried plugging this through an old school Fender, and it just delivered tone for days. It got that awesome, vowely kind of blues tone that killed. I then tried the neck, and I got a pretty good clean. I tend to prefer single coils or full sized humbuckers for cleans, but these can work nicely. I tried it through an old Plexi next, and that's where this guitar really came alive. The hard rock tone was just killer with this guitar. It can do both rhythm and leads without any issues at all.

If I had my choice, I'd probably buy one of these as I find they tend to be a bit more consistent than the older Gibsons. It's not that the newer Gibsons are put together. It's just that the older ones are so heavily played that you don't know what has happend with them. I've seen a lot with twisted necks, beat to hell and ones that just don't sound good at all. If you're buying used, you're going to be taking a chance, so keep that in mind.
Did you find this review helpful?yesno
»