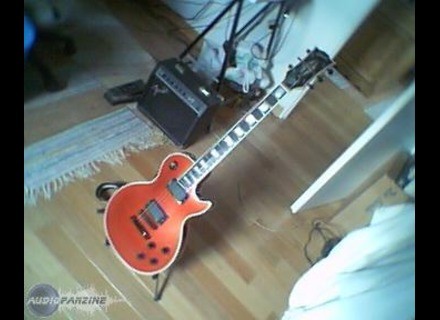 Gibson Les Paul Custom Showcase Edition
4
These guitars are kind of like a mix between a Custom and a Standard. They're basically Standards, but they have the ebony fretboard on them, so I guess that's why Gibson called them a Custom. In reality, there isn't a whole lot of a difference between the actual Custom and Standard aside from the fretboard (in the current production models), but some would be willing to argue a few minor details. The guitar features a mahogany body with a maple top, mahogany neck with an ebony fretboard, 22 frets, trapezoid inlays, pickguard, binding, hard tail bridge, two humbuckers, two volumes, two tones and a three way switch.

The guitar itself was pretty light. It was nice on my back, but I almost felt it was too light at times. I tend to like Les Pauls around the 8 to 9 lb range, and this was closer to the 7 lb range. It's not a huge deal breaker, and I didn't experience any general loss in tone as a result of it being brighter, but I was just slightly taken aback by it. The ebony on this is pretty much the same as you'd find on the Custom series, so no surprises there. The guitar actually had locking tuners installed in it at one point, and you could see where the headstock was drilled. The locking tuner mod is a great mod, but please find tuners that perfectly align with the stock holes so it doesn't look ugly. The frets were decent, and the nut needed some work for it to not snag the strings every time you tuned the guitar.

This guitar actually had EMGs installed in it, and that's a bit of a surprise as I only know of a handful of Gibsons that come with these pickups installed stock. The guitar had an EMG 81 in the bridge and an EMG 85 in the neck. The 81 in the bridge sounded thick, but it had enough bite to cut through without a problem. It worked awesome for metal tones; in fact, it was crushing. I was really surprised how nice it sounded. The 85 in the neck was super thick and worked awesome for those legato and shred leads. The clean tones were pretty awful on these, but that's fairly typical with EMGs. However, since it's geared towards metal, the clean tone doesn't really matter that much.

If you like EMGs, you'll love this guitar. Some people say that EMGs sound the same in every single guitar. This isn't exactly true, but there's a hint of truth to that statement. They're a bit more linear and predictable sounding than other pickups, but an EMG in a strat is not going to sound like an EMG in a Les Paul. If you hate EMGs, you can either get one of these cheap and install passives or just not buy it in the first place...

Exorcist's review (This content has been automatically translated from French)

Gibson Les Paul Custom Showcase Edition
5
Manufactures in the United States (and never officially imported to France by Gibson), I was fortunate to find in a store in Paris this MODEL manufactured only 200 copies, there are ten years . The finish is qu'impeccable. Mcaniques Grover and the two EMG humbeckers make this a limited edition six-string vritable bomb!

SPECIFICATIONS two points are taken into account with this guitar. First, as with most of it is Les Paul heavy trs. For the live, it is better to physically carry the prparer 4.70 kg for a while. Then add the EMG power and sustain that will delight players of big sounds, but will be of no useful for blues fans Telecaster, for example. However, all these are strong lments personality of this guitar.

This guitar is perfectly suited my needs. It is not, as I indicated a dj versatility fits perfectly but all types of distortion. The sound's clear is not nglige, even if it is not snapping trs, this Les Paul rvle in this configuration sound particulirement int Ress. Whether in 15W Fender, Marshall JMP 100W Guitar Rig or under, it is still warm and enjoyable play trs.

For ten years I use this guitar I think I'll never spares. The 7000F of the era are largely written off (especially since the rating has doubled since the doubt). The same beauty of the object is a unique guitar. The bright red dress that I MODEL possde seems plutt even be rare (I have only seen MODELS black or white, ever more of that color). In short, it would pass me on the body so I sold it one day!