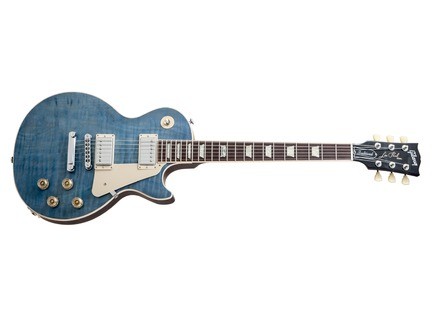 Gibson Les Paul Traditional 2014
1
This is a Les Paul, and more traditional (ha, well, without laughing):
- Full Body
- Mahogany for the corp and the neck profile late 50's, that is to say, rather balèze down
- Maple top
- 3 position selector
- A volume and tone micro

But it is a 2014 edition, therefore, to make a guitar like a little different but still added:
- Micros 59 Tribute
- Buttons potentiometer with a better "grip"
- A 120th anniversary logo that I personally find quite distasteful, but ...

Violin:
The handle filled hand well. You must love. Personally, this is not what I prefer (at Gibson, I prefer the slim type for example), but once we got in the habit, it's nice to feel that we a timber in the palm.
Not being a fan of lightweight instruments, I find reasonable weight for a guitar of this type.
Original pulling rope is a little light for this type of scale (10-46) and I congratulated me (not long or more) of passage 10-52.

Finish:
The aesthetics of the guitar could be really great if the finishes were at the height of selected wood for the particular table (beautiful on my copy). In particular, I find the finish and binding cylinders really rough for an instrument of this price: the passage of the cutter is not binding réggulier and the thickness is not uniform. The binding is therefore sometimes "dug more" than the rest of the guitar, which is particularly unpleasant when it happens on the handle. Also, my copy had drips of varnish on the binding (orange on the cream, it shows, and it's ugly).
Fasteners straps had the game A little screwdriver was enough to solve the problem.

The sounds were good, even very good indeed, in the few minutes of test store and the first hour of rehearsal. It was our honeymoon ... haaaa .... we were so good together ... we étreignions endless and we enlacions madly.

And she ruined everything! The neck pickup is set to produce a terribly muddy sound unworkable. "Fortunately", it only lasted a time as said micro finally had the decency to end our respective soufrances totally ceasing to function. When this was done, the acute micro already producing since long (too long) minutes sound from elsewhere (but not far enough) that specialists know as "super-crain crain beyond bearable ".

I put 1 for short fun times we had.

Back Store so. Attempted repair "ha, well it must be a massive problem, it happens." It is true, after all, why it bothers me, it happens, that's all.
Indeed, once the original wiring (approximate) and weld (also approximate) analysis, it appeared that thread was walking in an inappropriate place. Once this is arranged by the luthier shop ... Tindin! I give you Emile: hey ben, it still not work. Or rather, but all the same.
Re-return or rather, non-recovery in store. After re-examination, the verdict: there is a problem.

Gibson USA, in his incredible generosity, probably driven by a surge of commercial goodwill (and perhaps also because the instrument is supposed to benefit from the "Gibson Gold Warranty" which is, as we shall indeed, very very impressive ) then offers me THE solution to clean my eyes already filled with a legitimate admiration for the extraordinary quality of a proposed low price of € 2,149 instrument even more shine: wait weeks for a 59 tribute micro parts. Hey, yes, it is Gibson himself manages, and France, as Europe in general (the small country left China) is a priority.

Meanwhile, I can always hang my guitar on the wall and my whistle solos passing or, as is already the case for two weeks, leave this plaidir luthier shop and put myself in the Air Guitar.
The store offers me the resume against purchase order, since there is no other copy available. Without thrush, blackbird on food, necessity is Act and all these things, so I agreed to stay with an asset: € 2,000 outside and no guitar therefore, until recently the store receives an ES-339 beautiful.

I leave this review, knowing that only reflects my experience and hoping that such deceptions are exceptional. Unfortunately, I understand the legitimate doubts about it, having had troubles similar to Gibson 3 of this price this year.

32 of 40 people found this review helpful

Linn Sondek's review (This content has been automatically translated from French)" THE ultimate vintage."

Gibson Les Paul Traditional 2014
5
In 2013, Gibson had significantly improved its LP Traditional by rewarding a solid body (so farewell holes!), Electronic condos with Orange Drop. It seemed almost logical that the Traditional had reached maturity and stage of ultimate development. But they did not count on the willingness to propose a Gibson guitar ever closer historical models and, more specifically, model 1959 presqu'accessible a price in all cases much more reasonable than almost € 5,000 for a requested R9 since it is equipped with microphones CustomBucker and some more historical details, that is to say from the model sold in 2013. Thus appear new pickups on the Traditional 2014 of '59 Tribute, a key piece in a solid rosewood, the oversized strap fasteners; suitcase revives, meanwhile, with the look 57/58: brown outside and pink inside.

The 2014 Traditional therefore offers:
- A solid mahogany body and full
- A solid mahogany
- A rosewood fingerboard and a solid piece
- A solid maple table grade AA
- A kit microphones '59 Tribute
- Orange Drop condos
- An inlay "120 anniversary" on the twelfth fret that will make this model an absolute collector
Here are essentially characteristics for some already on the 2013 vintage.
Of course, the guitar is made in USA and comes with a nice hard case.
The finish is perfect and beautiful sunburst. The guitar weighs lack of balance but for now I can not specify with certainty weight. I say that it is beyond 4.5 kg.

The neck profile remains unchanged: it is the good old '50 profile type, well rounded and I especially appreciate. The shape of the guitar is well known and has virtually unchanged for 60 years. A nice consistency but ultimately nothing out of the ordinary as it was perfect in its output.
Getting a good sound is a breeze since only a jack and an amp, I would say any amp.

LP Traditional having the last 4 years, I think many know the model and can judge the differences.
This vintage 2014 its new pickups is a real new guitar more than just evolution. Both pickups '59 tribute grain gives a significantly different compared to those offered the usual kit Classic 57/57 +. I find them a more assertive character, sounds more "grainy" with more substance and presence. The output level is the same but the pickups react further to volume settings and, as always on the Gibson LP, maintaining a balance of frequencies and perfect definition. Compared to the kit 57/57 +, lower volume changes the overall color and intermediate position more funky sounds and airy, more crystalline is obtained. Volume knobs to bottom, all the roundness of the legendary Les Paul is waiting for you. The overall definition also seems higher. The bridge pickup is a pure delight, revealing less aggressive than the 57 + while providing generous but more creamy treble level. As for the neck pickup alone, it is a world of depth, solid sweetness, slight firmness! Of course, the two tones add many tonal variations, more subtle to more pronounced. Gibson is still very strong and provides a kit of microphones that will become a reference in the shortest possible time. It does not appear yet in parts in Europe but is already in the U.S.; rave testimonials are available on the web. Nevertheless, the whole 57/57 + is not to throw, that one understands!

I have this LP for 3 or 4 weeks and fell immediately in love. From my point of view, it is perfect and offers almost infinite sonic palette. Like all LP, it responds to particular settings volume and tone. The new pickups to show reactive, full of character and even richer than the '57 Classic, yet most excellent.
The price / quality ratio seems to me as the optimal level of violin, electronics and finishing suffers no negative criticism, so I do it again this choice without hesitation.
Finally, I find nice that Gibson has with this new Traditional with a vintage suitcase, reviving its history. Some may prefer the classic black but the spirit of this guitar that competes more with those of the Historic Reissue range goes perfectly with a brown suitcase.

18 of 20 people found this review helpful