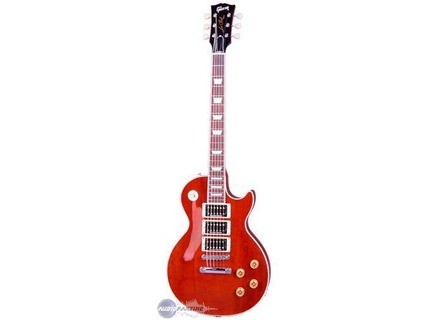 Gibson Les Paul Standard Mahogany 3 Pu
4
The Les Paul Custom 3 humucker model has been one of those love/hate guitars, and for those who can't afford to own the Custom model, they made this one. The guitar features a mahogany body with a maple top, mahogany neck with a rosewood fretboard, 22 frets, trapezoid inlays, pickguard, binding, hard tail bridge, three humbuckers, two volumes, two tones and a three way switch.

These models are put together very well. The first thing you notice is that the finish itself was pretty much flawless. I couldn't find any drips or any issues where the binding meets the paint. The nut itself was cut perfectly, so there were no tuning problems to worry about. The frets on this were nicely leveled, and I was able to get some nice action going. The ends were also not sharp, so it didn't hurt your hand every time you went up and down the neck. The biggest issue I had was that the middle pickup kept getting in my way when picking, and it was super annoying.

The pickups sound average. The bridge works for some of that fat Gibson rock tone, but I find that it seems to lack the clarity that other, nicer pickups tend to have. I was able to get a decent clean tone out of it and a solid blues tone, but it came apart when I started doing some old school 80s metal with the thing. It definitely can't do any death metal, that's for sure. The middle pickup is useless, and I hate it. Enough said. The neck pickup was a bit bright for me, but I like super fat neck tones like the Air Norton and EMG 85 deliver. Cleans were cool, but that's about it.

If you're a fan of the three humbucker pickup Les Paul, these are worth looking into. They're not for people who rarely use the middle pickup, however. In fact, you'll hate it. I know I did. The sound was solid, so I can't really complain about it too much. I just never understood the reason for a middle humbucker.
Did you find this review helpful?yesno
»