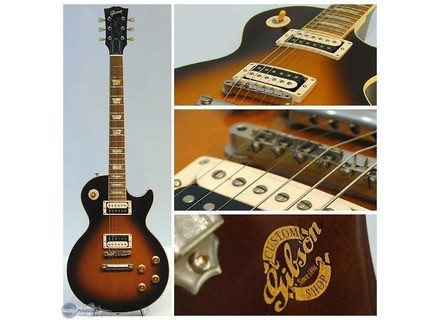 Gibson Custom Shop - Les Paul Classic Mahogany
5
The Gibson Les Paul is one of those instruments that just provides a great amount of character and soul in the tone. No matter what amplifier you put this in front of it's going to sound fantastic. It has a little bit more features than a Fender Stratocaster guitar with the extra volume knob and tone controls for each pick up but overall it doesn't have that many modern features. It's a very basic guitar compared to many of the new modern guitar builds. So it doesn't have any midi switches or boosts or anything like that. There are some models that have a push pull pot and if you've ever listened to Led Zeppelin or Jimmy Page. He used to use a push poll pot for his phasing. These are customizable guitar. So you can add different things to the electronics to make it more modernized.


This is his great sounding instrument and has a full body and warm tone. The guitar features mahogany wood in the body and in the neck with rosewood fretboard. This guitar will go crazy in any medium gain all the way up to high gain amplifier settings. It doesn't really do justice in a clean settings so if you're using in front of the Fender amplifier or something with a clean tone, it's not really going to give you that sparkly spanky tone that you would get from a single coil guitar and better yet a Fender Telecaster or Fender Stratocaster guitar. However, it will be a full bluesy body tone and will be rich and full of character.


These guitars come in right around $3000 or so depending on the features in which model it is. This is good to be a professional guitar for someone who doesn't really have budget concerns or knows exactly what they want. I recommend everyone to get Les Paul guitar at some point in their career because is that classic hard rock tone that is just full of character and soul that just brings out the best and everyone is playing.
Did you find this review helpful?yesno
»

Gibson Custom Shop - Les Paul Classic Mahogany
3
There is no reason this should be a Custom Shop model. The normal model is perfectly fine and the Custom Shop model does not really bring anything to the table. I dont expect this guitar to sell in my shop and I wouldnt really recommend anyone buy it because it is just an overpriced Les Paul Classic. You dont get anything special with this guitar. You get the standard mahogany body with a maple top. The neck is a mahogany set neck with the 60s profile. The fretboard is the dryest rosewood ive ever seen with some ugly green "aged" inlays. The guitar is pretty standard. 6 non locking tuners up top with a non locking bridge. It has a set of 57 Classics which makes it sound a lot better than the normal one but it isnt worth the extra they are charging.

This guitar plays pretty decently with the 60s neck. The 60s neck is a bit thinner than the 50s neck so it is easier to play for most people. Other than this it is pretty much your standard Les paul. Non locking tuners like the 1950s up top. The tune-o-matic bridge is non locking which is pretty silly when every Epiphone now comes with a locking tune-o-matic. The non locking bridge means everything is held on just by string tension so when changing strings or working on your guitar everything can fall off and mess up your intonation. The fretwork is good like on all high end Gibsons due to their use of the Plek machine. This machine levels the frets on the guitar better than any human could so out of the box your frets should be perfectly level. On this example this was true.

The sound on this guitar is slightly better than on the normal model due to the 57 Classics they include on this guitar. The natural tone of this guitar is pretty thick with the big mahogany body. The maple top adds some high end clarity to the sound but the base of the sound is the mahogany lump. With the Classic 57 PAF style pickups this guitar is a blues and rock machine. The 57's have just the right amount of sag in the tone so you can really work the dynamics like you would with a set of real vintage pickups. The neck pickup is super smooth and when you throw in some tone knob you can get that sour tone like you have a parked wah on. The bridge pickup has a little more bite and spank to it. With some gain you can get good classic rock tones from the bridge pickup. These pickups can handle more gain than a set of PAF's could. Because of their modern design they retain their composure longer than a set of old pickups could.

This guitar is pretty strange. I dont know why Gibson decided to put it out. Its not like they needed to build this guitar in their Custom Shop anyway. Its just a Les Paul Classic with different pickups and they are charging like twice as much. You can get a normal Les Paul Classic for like 1300 bucks and a pickup swap is only like 100 dollars. That is a much better deal than this guitar. I would recommend doing that over buying this guitar.
Did you find this review helpful?yesno
»

Gibson Custom Shop - Les Paul Classic Mahogany
4
The Gibson Classic has always been one of those ugly duckling guitars for whatever reason. Most people didn't buy the standard model, so I'm not sure why they made this one. The guitar features a mahogany body with a maple top, mahogany neck with a rosewood fretboard, 22 frets, trapezoid inlays, pickguard, binding, hard tail bridge, two humbuckers, two volumes, two tones and a three way switch.

The inlays on this thing are absolutely ugly as sin. I have no clue why Gibson thinks people would like those green inlays. All the inlays I've seen that were aged look more yellow, not green. I noticed that some of these guitars have some fretwork and nut issues. The frets can sometimes have level issues which will cause issues with you start to lower the action. If you notice some fretting out on certain frets, this is probably a good indicator that you need to get your frets leveled. The edges can sometimes be sharp, too. The nuts can also be problematic at times. If you ever tune your guitar and notice some odd sort of ping, then the guitar goes sharp, your nut is binding. You'll need to get your nut recut if that's the case. This one, thankfully, had no issues.

The pickups in this thing are pretty hot, and if you can get past the ugly green inlays, it can be a pretty cool guitar. However, it's quite expensive, and if you're on a budget, I recommend just getting the regular Custom model. It'll be a better deal in the long run since you can get them pretty cheap for a Gibson.
Did you find this review helpful?yesno
»

ray_mulligan's review (This content has been automatically translated from French)

Gibson Custom Shop - Les Paul Classic Mahogany
5
- Of course, requires Custom Shop model is made in the USA, mine was in 2000 ...
- 22 frets
- As the name suggests, it is Mahogany. The table is made of one piece, so there is no split in the middle, which I personally do not like, so it suits me well!
- The photos show, but it has two tones and two volumes, everything is normal.
- The pickups are the famous Classic 57 and Classic 57 + ... a marvel and the 3-position selector.
- The handle is fine, again I love ... Having also a Fender Cyclone, I quickly used to the round of the Gibson. Guides are trapezoids with a pearl biding around the neck (not head).
- Color: Antique Sunburst. This is not seen in the photo is that the varnish, in the light parts, reveals the striations of the wood (it's beautiful), it gives a natural look.

The guitar is super nice ... the handle as a penguin sliding on the ice. It's simple: I have grip, I started playing and am immediately felt better! Access to treble is good until the 17th box, then it thickens slightly (but below, I go really often I have to say) since clashes with the body of the guitar. Regarding the weight, it looks (it feels sitting only) back, but it is absolutely not a problem and standing is perfection.
The sound ... what about ... The Classic 57 is hot, it's round, it's accurate, it does not bleed. Those who know these mics know what I mean, the others test them urgently, really ...

I play garage rock and it suits me perfectly. I manage to get his incisive and rather clean compared to my Fender (Cyclone, if you followed the beginning). I head the branch on a Soldano HR 100 + and a Marshall cabinet 1960. I only use the distortion of the amp, it would be a sacrilege, what do I say that is heresy to balance the effects in this guitar.

In short: I have this guitar for one month now (almost), there's not a day that goes by that I play with, I have not found anything yet and I think that I will find something to complain about ... This is a guitar that has sealed my bank account (the average new price indicated is wrong ... A Custom Shop, I do not think there has to Euro 1700 ... there must be some confusion) but I have no regrets (my banker perhaps). I have not tried it before the masses, but its level was the best part is that with which I felt soon at ease by taking charge, as if I ' had for ages. Well, 3000 euros (out of the store), the Custom Shop is currently running an average of 4500 I believe ... I can not step back, but I do it again this choice without hesitation. If you have the same contact me to give me your impressions!
Did you find this review helpful?yesno
»