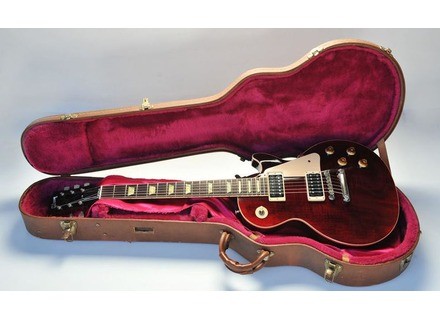 The sound is very warm and responsive, but has a ton of punch if you go distorted. I play blues (SRV, King, BB, etc...) and let me tell you this is the guitar for sound. The look is great with a tightly flamed maple top and a well applied cherry sunburst. Fretwork is superb and the action was the only problemo.

Excellent construction, and the quality of the woods were about an 8 out of 10. 8 because there are some flaws in the grain of the flamed maple that take away from its otherwise beautiful look.

If you love blues or rock, you have to try this guitar in a Fender DeVille or '65 Reissue. Nothing can really compare tonally to my ears! I tried PRS but it didn't quite meet the mark in sound. Fender's are too mass produced now and suffer in a lot of areas of construction quality. Gibson (which I've never been a fan of) has now won my heart for electrics (their acoustics suck though).

I have always like the way the classics played. Some were just terrible and others not so much. It really depends on which one you have in your hand. I have played countless Gibson Les Pauls and many were good and many were not so great and they had priced tags of $4000 and more.

This guitar can be rocked out with a MArshall half stack or a quality tube driven Fender amp. You can get a good classic rock tone from a Marshall plexi reissue or even a fender Twin Reverb with an Ibanez tube screamer out in front. These guitar just play what is given them and with be great accompaniments on the stage.

these guitars can be found on ebay all day long. Most of the ones with nice tops in have been going for right around $2200 give or take a few hundred bucks. The standard body ones have been around $1500 or so. so they can be owned easily and with a good credit card can be yours today. I would recommend playing one used if you can find it to see if it fits your hands nicely and comfortably. That will be the test if you will own it.
Did you find this review helpful?yesno
»

Gibson Les Paul Classic Plus [1993-2002]
4
This is pretty much the same as the Classic, but it has a premium flame maple top on it. The guitar has a mahogany body with a maple top, mahogany neck with a rosewood fretboard, Tune-o-matic bridge, 22 frets, block/trapezoid inlays, a pickguard, two humbucker pickups, two volumes, two tones and a three way switch.

This guitar looks great. However, we had a few batch that had some iffy fretwork and nuts that weren't cut 100% properly. When buying one of these, be sure to make sure the frets feel nice and you're able to achieve low action with it without fretting out. Also, when tuning it up, make sure there aren't any "pings" or any other noises that might occur. If it does, this means that the nut is binding and needs to be opened up a touch.

These guitars are really good, and if you can find one at a great price, I recommend snatching it up. They can have some issues with fretwork and improperly cut nuts, so keep that in mind. Thankfully, those are pretty easy fixes compared to a dead sounding guitar. As long as the guitar is resonant, you should have a good player on your hands.
Did you find this review helpful?yesno
»

Gibson Les Paul Classic Plus [1993-2002]
5
Guitar made in the United States, bridge les paul classic, round type 60 rather then the end (for Gibson), 22 frets, 2 pickups ceramics, volume and tone for each, 3-position selector

Well the handle goes well, I have small hands, after the highway is not in my jackson guitar either but has a different orientation. Despite the weight loss of Gibson, it is relatively heavy, the balance is not very good, the bulk behind the lady makes the game sitting position uncomfortable. Access to acute is not great but if you know a les paul which is the case, let me know. In terms of sound, it is good to very good. The microphone sends the pate is fat is velvety, the palm mute remains clear and clean, it sounds gibson, the registry is large due to the high output pickups. This requires tame the beast because you have to play with the tone and the volume if you want to be in a more classical. I blame him for a large output gap in the two microphones, so pay attention to changes in full song. To give you an example, I played Brothers in Arms Dire Straits to my wife, she could not believe the subtlety of the sound (I said that my wife has always bathed in the zic before being told that his opinion not worth much

Style of music? I have not! I like everything, when the music is good, it is good regardless of the register. This is also my great problem because of the sudden I need a lot of stuff. Let's say I have my Start for clean sounds, the jackson to nag and shred, between the two I missed that this guitar came close and she does it perfectly.

The sound is clear, honest, fabulous crunch, the distortion is amazing. I did not know that my Laney was able to before ca (ca makes me think that I will have to correct me on this amp).

Since two days but I already know it will stay with me for life. No I have not tested many other models, I had a studio one day, I tested a standard but I put off the handle. Whatever anyone says, we can arrive at sound close to a standard despite the difference in micro but is played with the amp settings, the volume and tone microphones and nuances of the game.

What I like most about this guitar is its beauty, quality, sound and on mine (I said that because of all models in the store there were differences) the quality of the key that is just ... perfect.

Published on 11/27/11
Gibson USA has announced the Les Paul Classic Plus.