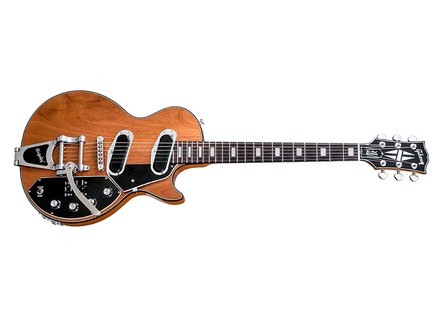 The handle is a slip type 60 'mahogany 22 frets. The mahogany body and maple table AA certified. Rather classic yet and this is where it gets interesting:
- The pickups are novelty at Gibson, they are splitable single or double coil.
- 4 knobs, 2 tone and 2 volumes
- There are also 4 buttons, 2 for each micro splite (single / double), one for the neck pickup out of phase and the latter is a kind of potion supposed to remove the buzz that I understand.
- The bridge is a Bigsby B-7 just beautiful.
- 2 outputs high impedance to plug into a normal amp and a low impedance to plug into a mixer.

This guitar is really nice to play. It is comfortable and a relatively good access to acute is available. I think this guitar is really versatile.
If one takes the trouble to look over it is terrible. Until now I have done what I wanted to achieve without limits.

His only major flaw for me is weight remains almost 5kg. That after a few hours of rehearsal or concert can really be felt.

I used this guitar for my entire directory humble in me multiple projects composition. musical styles in which I mainly tried sound: rock, blues, bossa, generative improvisation and to a lesser extent some jazz.

I used it on many amps, ranging from orange th30, a Bugera tube, a roland Microcube home or even on a mixer ... The conclusion remains the same, this is an exceptional guitar !
Neck pickup can get beautiful sounds very round, warm wishes while in phase shifting our microphones can get a nasal sound. There are many possibilities you just have to spend time to understand the trick!

I use it for several months now and I think using it for many years to come.

I had other Les Paul before and I must say that it exceeds very far.
For me its strong points are:
- Its unique look.
- Its versatility.
- Its exceptional playability.

And weaknesses are:
- Its weight (5kg).
- The distribution Gibson makes this very difficult to achieve in Europe guitar.

The guitar costs about € 2,400 is very expensive but they are largely justified when you see the product. Then finally I would do without hesitation that choice, this guitar is for me the ultimate Paul!

Published on 01/10/14
Gibson USA brings up to date a guitar manufactured in the 1970s for musicians playing in studios, the Les Paul Recording.