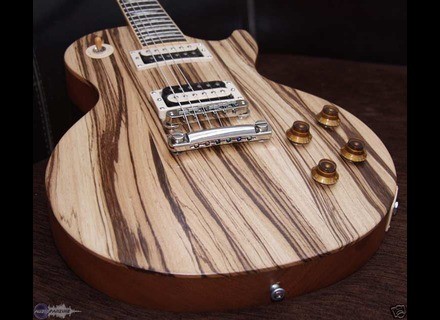 Gibson Les Paul Classic Antique Zebrawood
4
Gibson has been experimenting with various tops, and this Zebrawood one was one of their creations. It's an attempt at trying to get both a unique look and tone out of a guitar, although I don't feel the Zebrawood attributes a ton towards the overall tone of the guitar. The guitar features a mahogany body with a zebrawood top, mahogany neck with a rosewood fretboard, 22 frets, trapezoid inlays, pickguard, binding, hard tail bridge, two humbuckers, two volumes, two tones and a three way switch.

The Zebrawood on this is very cool, and it adds a unique look to the guitar. To be honest, I'm not totally crazy over its looks as I feel the pattern is very overstated. I generally prefer a more subdued look on Les Pauls, but that's just me. The wood itself had some strong figuring going on, and it was a high quality top. The frets on this were top notch, and they were nicely leveled. The ends were a bit annoying, but that's kinda standard with what you'll find with bound necks. The nut itself was cut properly, and there were no issues with tuning.

The Zebrawood is the main reason to buy this guitar. If you're a fan of that odd figured wood, you'll probably really like this guitar. It really stands out when compared to other Les Pauls out there, and uniqueness means a lot when it comes to Les Pauls. After all, so many look alike that it's hard to be different while still getting that awesome Les Paul tone. I wasn't the biggest fan of the top, but it was definitely quality.
Did you find this review helpful?yesno
»

phukas's review (This content has been automatically translated from French)

A real pice of collection, especially since it is the limited edition of 400 copies for the world!

Channel Profile 1960, like it or not.
Channel end, I love.
Accs for acute as any Les Paul, that not a Fender.
The Pro Humbuckers, rang loud.
The 4 knobs are effective. The difference is sound based on the quality of the amp.

A very nice clean sound, the one I prefer.
Depending on the amp, all played on the rglage two microphones.
The amp amp prdilection remaining lamps.

It is a guitar that I've had over a year.
It did not even move.
No deformation.
The sound is enhanced after three months. Certainly by the time the wood gets used my climate region.
I also had a ES137. The only big diffrence apart from the rest as the microphones. The P90 does not sound the same fashion as feedback and rise faster.
For the price, it remains the Gibson, not given.
The same choice difficult is a series limit. But it is more pleasant than a Les Paul Standard.