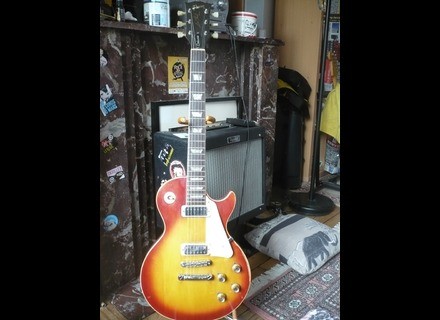 Gibson Les Paul Deluxe (1971)
4
My uncle gave me this guitar. He rather mysteriously said he got it for £100 and a wristwatch. For a Les Paul Deluxe from 1970 - 72 (according to the serial number), this is rather low, but the reason is simple...

This guitar has been completely stripped. In its past, some fool has removed the finish, leaving naked, unvarnished maple and mahogany. Also, the original mini humbuckers have gone, to be replaced with some cream plastic humbuckers of unknown origin. Despite these heretical flaws, I love this guitar to bits. Played clean, it sounds rich and bright; distorted, it can rock your socks off at 100 yards with its angry bass rumbles and wailing highs. The action is still clean, lovely and low despite the 30 year old frets.

It might look old and venerable, but I still imagine what its original finish would have been like. Also, the pickups are prone to buzzing, but this is probably due to inept modification.

Heavy, battered, loud and rocking! I love this guitar. I just wish it was in its (no doubt glorious) former state!

Gibson Les Paul Deluxe (1971)
4
This is a unique, one off that some customer modified quite heavily, so this review might not be the best review out there for this particular guitar. Keep that in mind when reading this as it's almost a different instrument. The guitar features a mahogany body with a maple top, mahogany neck with a rosewood fretboard, 22 frets, trapezoid inlays, pickguard, binding, a special tune-o-matic to floyd style bridge, two humbuckers, two volumes, two tones and a three way switch.

This one had all kinds of mods done to it by the previous owner. The first thing you notice is that this had a very rare and hard to find floyd rose that fits on the actual hard tail studs. These devices have lots of tiny springs in them that help them function the way they do, and it actually works pretty decently. The guitar didn't have a locking nut, so it wasn't quite as stable as a normal one would be, but it still worked out. The neck was shaved, it had a few extra holes for different series/parallel configurations, and it also had a small mid boost installed in it.

I actually happen to like this guitar quite a bit as it's closer to the guitars I normally tend to play. The modifications were really stuff that I looked for in a guitar, and I happened to own this for quite awhile before selling it to someone else. I hope the other person likes it as much as I did as I really miss this guitar and almost want it back...
Did you find this review helpful?yesno
»