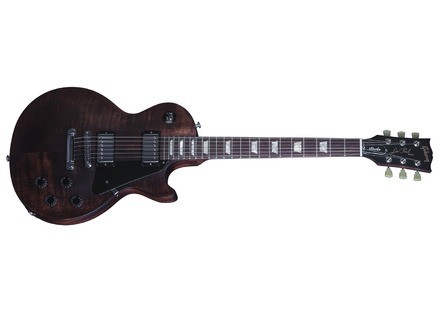 Gibson Les Paul Studio Faded 2016 T
5
This guitar surprised me right from the start. My brother was on vacation in NYC and I asked him to buy me a 60's Tribute 2016 T (P90) but he misunderstood my request and he brought me this one. I needed to say this because it wasn't on my plans at first...
But as soon as I got my hands on it, it felt delicious. Mine is in Worn Brown and I'll tell you it's my favourite color! and looks better in person. It comes with a padded gig bag.
The neck is rounded, but not the baseball bat, it's very comfortable. The worn finish gives you a warm feel to the touch. The minimalistic looks and the combination of chrome with this color looks stunning.
Well that is just for the looks. The guitar has enough vintage appointments to mantain the attention of the most exigent purists.
Also, I'm pleasantly surprised by Internet reviews, but that is only a confirmation of something that I can confirm by myself.
The overall workmanship in this model is well-dedicated, and the action is precise, with no buzzing frets besides the low action.
It is a modern weight relief, a big difference for the ones whom don't want their shoulders broken.

Well let's get into the sound. This one brings the Burstbucker Pro's (the same pups of the Standard). I'm very familiar to the BB's and I really dig on that sound, I'm a blues, rock and prog musician and it sounds like a PAF should sound (I also love 57 classics) the BB pro's are a tad brighter and punchy than BB1 and BB2 and very similar to BB3 in intensity. They are alnico V and they have great articulation on a crunch amp. Clean sounds are really nice with a lot of definition and big fats well balanced sound. Great sustain (as most lesters) and you can obtain a great variety of sounds tweaking the volume and tone controls. They work smoothly.
The most important for a guitar at this price range is how much it approaches to the "real deal" big brothers. Well this one really sounds like them and I'm sure in a blind test some experts would hesitate.
As a guitarist and producer I live in two worlds (recording on a digital studio and gigging with classic rigs & vice versa) the Studio Faded goes nicely either way.

With all that being said, I need to talk about my advice.
PROS: Genuine Les Paul sound - Nice looks - Comfortable neck - Well balanced - Low cost - Amazing cost/quality ratio. Solid build. Robust electronics.
CONS: The cons for this instrument are related to subjective things like the looks, some people don't like simple looks, and maybe lack of pearl logo on headstock, but that doesn't have to do with the soul of an instrument.
FINAL THOUGHT: If you like Les Pauls I strongly recommend to try this one before spending much more in other models.

Published on 12/06/15
Gibson has unveiled its 2016 collection with 14 models of electric guitars, each of them available in Traditional and High Performance versions.