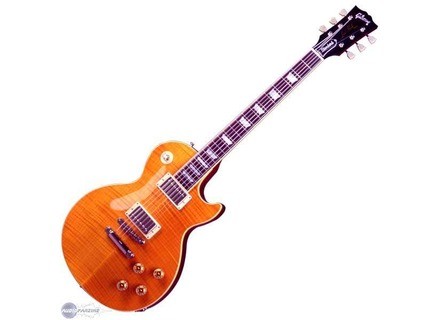 Gibson Les Paul Standard 60's Neck
4
If you want to have an old school Les Paul the Goldtop is the best way to go. The Goldtop was one of the first colors you could get a Les Paul in. Les Paul believed this color stood out best on black and white TV. This model is based on the later Goldtops. It has humbuckers and a 60s neck. Early Goldtops had P90s and a fat 50s neck. This model has a more modern feel to it. With this model you get a mahogany body and a set mahogany neck. The neck is the thinner 60s profile and it has a rosewood fretboard with 22 frets. The current Les Paul standard model has some nice modern hardware on it. Up top you get locking Grover tuners and the bridge is a locking Tonepros Tune-o-matic. Ive been yelling at Gibson to start putting this stuff on their guitars for years. This guitar comes with Burstbucker pickups standard but the example I demoed has a set of 57 Classics in it. The controls are standard Les Paul with a volume and tone for each pickup and a 3 way toggle for the pickups.

Locking tuners and bridge on a Standard Les Paul finally. These features make the guitar more road worthy and easier to work on overall. The locking tuners keep everything in tune better when you are knocking the guitar around and the locking bridge keeps the bridge on when you are changing strings. The 60s neck is what makes this model unique. The 60s neck is quite thin by Gibson standards and they do not put out many Les Pauls with it. It is more of an SG neck. It is way more playable than the old 50s neck. The 50s neck is huge like a baseball bat. The 60s neck has more of a modern feel to it.

Since this guitar has 57 Classics in it the sound is real Les Paul. I am not a fan of the Burstbucker pickups. I think they too hot for the traditional sound and not hot enough for a metal sound. The 57 Classics are perfect for the old school PAF tone. Its Gibsons best pickup and its pretty much just a modern PAF. The balance on these pickups is perfect. The 57's have just the right amount of sag in the tone so you can really work the dynamics like you would with a set of real vintage pickups. In the neck position is super smooth and when you throw in some tone knob you can get that sour tone like you have a parked wah on. In the bridge position it has a little more bite and spank to it. With some gain you can get good classic rock tones from the bridge pickup. If you have a Gibson and want real Gibson tone I would recommend you swap in a set of 57 Classics.

The combination of new and old school in this guitar is great. You get new school playability and hardware with old school Goldtop looks. Gibson has waited so long to add these features to their guitars I think they have missed out. Epiphone guitars had locking bridges before Gibsons did and thats not right. I think the Goldtop look is making a comeback. If you are looking for a nice playing Les Paul with road ready hardware but old school looks this Goldtop 60s neck Standard is a great guitar for you.
Did you find this review helpful?yesno
»

Gibson Les Paul Standard 60's Neck
5
The 60s neck on this thing is the biggest reason to buy this. In fact, this is very similar to the Classic but without the hot pickups and plain maple top. The guitar features a mahogany body with a maple top, a mahogany set neck with a rosewood fretboard, standard trapezoid inlays, 22 frets, a tune-o-matic bridge, two humbuckers, two volumes, two tones and a three way switch.

This is one of my favorite Les Pauls. The thinner neck on this is absolutely perfect for the style of music I play. They sound great, and they look awesome. If you're going to get one, be sure to check out the fret work and the nut on these. Those are the biggest issues when it comes to these guitars.
Did you find this review helpful?yesno
»

Gibson Les Paul Standard 60's Neck
5
Mine is a 2012 so for fault-known 2012, the two key pieces of folds.
Otherwise it's just a killer.
Moreover it can be a good deal to buy a 2012 because it is cheaper to pay because of this defect.

The handle 60 is not so fine as that, it is the width of a 58 and is refined in its thickness.
It approximates a lot of 59, the difference is almost insensitive .In any case it was not my buying criteria .There is not a slim-type.
The weight is 4.1 kg .Bon me it's not a problem for me, I have always played on Gibson so good ...
Access to the usual treble a bit more difficult than on a double cut, but entirely possible.
It is easy to get a good sound, it just has to play in it.

The pickups are Burstbuckers, these are not the world's best PAF but they have the merit to faithfully recreate the sound of the violin .I like them very much as I hated to a standard .A I think we can do better but I do not feel the urgency to change.
These pickups are excellent in clean sounds and crunches but lack a little definition for large Satus .They are both crystalline and fat, know cut corners while maintaining a good edge, they are versatile and respond well to knobs volume.
At the level of amplification, I have not yet found my happiness, I think the JCM800 ultimately prevail, but the guitar still sounds a bit all over the lamps amps after what is the quality of the saturation may fail on some.
So maybe electronics to review as when you type in the big satu in heavy metal style or sound must be precise while keeping its historic character .The are not optimized in this direction.
But it's true that with such guitar we tend to immediately put the amp in question ...

So I have this guitar for about 6 months.

J 'have owned 2 Les Paul Standard .The standard deliver a more modern sound, closer to Slash, while the CS have a vintage sound (probably largely due to the difference in wiring) .Of course the two are versatile, the difference is quite subtle but clearly audible.
So that's what I could fault a little at CS, lack of modernity, but it's just a matter of personal taste .I think I'll end up changing electronics.

The thing is that among the standards there are many disparities in violin .Personnellement I feel closer to standard but I have struggled with their violin so tasteless that I abandoned hope of find excellent.
Both CS I've tried, including my famous 60 'both have a very acoustic sound clear sound even disconnected .After there are large differences in the nature and you can easily switch to blah wow depending on what we want at first, but the two are great guitars.

So I would say that the main strength of CS Gibson is the violin (which I do not know what that gives good sound violin) .The its rich, woody sometimes not found on standard, in whole If the ones I played.

The value for money is absurd, it is probably possible to find both in other brands for much cheaper but again it will generally look .So, we buy these used guitars and in this case, it's worth its price .dropoff window

I would do this choice with his eyes closed, it is the Les Paul than I expected, it took me 17 years to find it.
Did you find this review helpful?yesno
»

Gibson Les Paul Standard 60's Neck
5
Gibson is a United States 2004, 22 frets, THE PAUL Standard (as listed under the bridge pickup - "LPST"-or as some smooth - "LPS +".). It is like all Lp Std since 2002 (50th anniversary of the Paul-Model, the first Lp. Not called gold-top at the time, since the only Lp.). 2 Alnico V micro Burstbucker (aluminum-nickel-cobalt-5), it's table flamed maple body, AA (except Ebony, the gold ...), the volume buttons have a flying saucer-type profile in Invaders, the shield (pickgard.) was not-but comes with instalée, Nickel hardware, it comes in a black case, lizard skin type, the truss-rod cover is devoid of any inscription. .. in fact it looks more like Curly Lp reissue maple top, except that it had the original microphone 57 and a round handle .... mine end to a handle type 1960 as the Lp Classic.

I prefer the handle-end of the round 60 50 matter of taste! ... Having played 12 years on SG understandably ... I find this nice round even if the main reason for my purchase of an LP is its beauty. I was already filled with my SG, much more by the handle, treble, etc ... but the sustain of an LP ... it makes you cast serious!
The LP-is heavy, but I'm not a sissy ... eh!

I-blues-rock, hard rock. I love beautiful distortion, heavy and accurate.
-I play with a Cry-Baby plugged into a V-Twin Mesa-Boogie, all in the clear channel of my Marshall V8080 (distortion channel has a good sound, but it decreases in volume!).
-The sound is heavier than on SG Std, which is sharper and faster, but there are similarities (Normal, they are sisters.).
-When I bought my V-Twin, I tried the store with guitars ... the catastophe! ... I was lost, detuned guitars with locking at the nut, the strings oxidized, copies of major brands in plastic! ... Finally, I think I can say that I'm Gibson ... but everyone just think what he wants ...

Did you find this review helpful?yesno
»
Read the 6 user reviews on the Gibson Les Paul Standard 60's Neck »