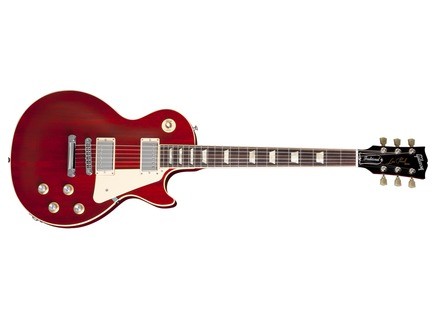 Gibson Les Paul Traditional Mahogany Satin
5
Primarily a singer, I've been playing guitar for about 10 years, been in a band (drummer!), and have continued to record and play with other musicians on a non-professional basis. My styles range from folk to hard rock, with heavy power-pop leanings -- Big Star, not Green Day.

I played this guitar for about 90 minutes at a friend's house. Its street price fluctuates between $800 and $1000.

First off, this is one of the lightest Les Pauls I've ever played. Weight has always been one reason I don't play Les Pauls, but this one feels as comfortable as my favourite SG. The carved top is gorgeous, and the simple finish shows off the stunning mahogany grain. You wouldn't think a finish called "Worn Brown" would look good, but it does. The Burstbucker pickups are great, the best humbuckers I've heard, the neck is extremely appealing, and the sound is wonderful, especially when using natural amp overdrive.

Some people may not like the worn, matte finish. I have no problems at all with it, though. This Les Paul doesn't have a maple top, so it's probably not as bright-sounding as some other Les Paul models. I've read complains about how the body of his Les Paul is a five-piece. Personally, I don't mind.

Fine to me. Classy construction, superb hardware, a beautiful finish. Every part of the guitar feels good to the hands and the shoulders. I've heard complains about Gibson's quality control, but the Gibsons I own as well as this Les Paul don't have any hints of this issue.

I've played Epiphone Les Pauls around this price range and I can tell you there's no comparison. The craftsmanship and sound on this Gibson Les Paul blows any Epiphone Les Paul out of the water; pay $200 more and get a Gibson. Again, I've never wanted to play Les Pauls since I tend to prefer lighter guitars, but this one is thoroughly comfortable and, as with the best guitars I've ever played, made me a better, bolder player.

Gibson Les Paul Traditional Mahogany Satin
4
I've been playing guitar since I was 10 years old. I'm now in my 50's, and still learning and lovin' it! I currently play in an acoustic trio and a four-piece rock band.

A genuine American-made Gibson Les Paul for under $1000? How can you beat that? This is a great guitar, but there are a few reasons it's priced where it is. It is a genuine Les Paul, solid mahogany top, back and sides. Mahogany neck, rosewood fretboard with beautiful trapezoid inlay! Good frets, plays well up and down the neck. Decent tuners, nice chromed stop-bar tailpiece and bridge. And the pickups are awesome! Dual BurstBucker Pros make this LP rock and growl! These are really nice Pups, very loud with wonderful Humbucker tone! Set-up on my particular guitar was great, but I had to go through a couple of them to find that. A nice Gibson hardshell case is also included.

The finish is the weak link with this Ax. I checked out a few of them and it varies quite a bit. It's a very thin laquer finish, and it's a rough finish. It does show off the wood well, but may not be for everyone. I wound up doing some work on it to smooth out the finish and am very pleased with the results. (light sanding with 1000 grit sandpaper, lemon oil rub, then polish). This may not be something everyone would want to tackle, but for me it resulted in a great looking, (and sounding) guitar!

This is a quality Gibson guitar. The finish is the only thing that's a little suspect, but that's why it's priced where it is. The frets were also a little sharp on the edges, but I took care of that too.

Again, for the price this is a great value in a genuine Gibson Les Paul. The finish may turn some people off, but I really like the simple beauty of real mahogany. Along with a great neck and kick-#*s pickups, this Les Paul could make someone a very happy rock&roller!

olivier61's review (This content has been automatically translated from French)

Gibson Les Paul Traditional Mahogany Satin
5
Everything has been said

The handle is very nice. It is not painted and it really glides well. I had the idea that the Gibson Les Paul were difficult to play well not really. It is very pleasant to play except perhaps in very acute acute, but it is anyway. The neck is thin and finger placement is done very well. I think even have progressed since I use it. Well it is relatively heavy but it is a normal Les Paul.

The sound is thick (it is said?), It asks only cruncher see more. I use it on a Vox AC15C1 and a Marshall DSL 5C and it sounds great on both. My favorite setup is with the marshall and TS9 for solos (not all the time). I agree with the two previous opinions, the sound is more serious, more fat than other guitars I've tried and that's what I liked. Playing the blues-rock (ZZ Top ...) is perfect. You can of course play with many other styles.

I use it for almost three years. When I bought it, I tried a Start, a SG 60's, a Les Paul 60's or 70's and a les paul studio. The price kept me (a little), but I cracked soon as I plugged. It really has nothing to do at his level. Being left-handed, I must content myself with what I find. Luckily the store had rested a few models including this one. This guitar has naturally stood out from the others. After there was the traditionnal but with varnish, I did not even want to try for fear of exploding even my budget.

To talk about the price I got it for € 1,300. At this price it's really interesting. At a higher price, so may have to pass on the varnished finish I think, to see on a standard after .....
Did you find this review helpful?yesno
»

kebemdo's review (This content has been automatically translated from French)" A vintage Les Paul sound!"

The '60 neck is a delight of comfort and offers great playability.
the rest are the same characteristics as a Les Paul Traditional

The sound connected to the body while mahogany, coupled microphones gibson classic 57 has taken the vintage register. I mean by all that is kind Led Zep, ZZ Top, ACDC ......
I mainly play on a class5 marshall: this is a class, it is the case to say!

I have 3 years.
For me and my registry, I just found the ideal Paul!

Did you find this review helpful?yesno
»
Read the 5 user reviews on the Gibson Les Paul Traditional Mahogany Satin »