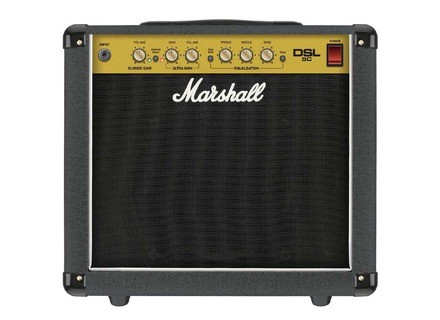 Product replaced by the Marshall DSL5CR.

goldorock's review"Very good Marshall amp for home use, even it if has a couple of weaknesses"

Channel 1: It has a very good clean sound, not thick, not hyper-warm but, it's very clean and very nice.
Plus, you can have a very good and powerful crunch if you push it.
You could say it's for blues and rock, ac/dc etc.

Channel 2: I think it lacks treble and even some gain.
And especially a 12" speaker, but it's not bad at all.
Gary Moore isn't too far

in his heavy metal phase.

This amp is truly excellent for heavy metal rhythm guitar (with scooped mids): It's what I would get for '90s hard rock/heavy metal (with the Tone Shift button engaged), because its sound is powerful.
Good dynamic response, to play some blues à la DSL.

On the other hand, if you crank up the mids (the high mids), the sound isn't nice, in my opinion.
So forget Santana and company.

To warp it up: If you are looking for a fat, powerful, dry overdrive that doesn't have a dip in the low mids,
this isn't the amp for you.

But, if you want to play Bon Jovi and similar sounds requiring punch, gain and a heavy sound, it's almost perfect! (otherwise, try a JVM).
Blues might be possible: A mix of blues and heavy metal, but blues in the Fender, Laney or Vox sense, no.

Do note that, like with many amps that have a 1/5w switch, you lose quite a bit in the high end
in 1w mode, so you'd better play in 5w.

I think the output power is manageable for home and it's pretty versatile, but the distorted sound is pretty modern and powerful, I'd say '80s and '90s.
It doesn't have that old-school Marshal sound, instead you get mid lows to play fast and powerful riffs.
Did you find this review helpful?yesno
»

Very easy to dial in.

It's very easy to find a good sound and, coupled with an effects pedal, it's magical.

I have a lespaul custom 77 CS3 london's burning with a classic P77 at the neck and a ANGUS YOUNG signature pickup at the bridge.

I wouldn't hesitate to buy it again!!!
Did you find this review helpful?yesno
»

The mp3 input doesn't work unless you connect your headphones. Very good to play with headphones without disturbing your surroundings. The sound certainly doesn't have anything to do with the amp's sound without cans.

It's very handy to be able to switch to 0.5 watts when you don't want to make too much noise, and the sound remains very good.

You can really fell it's an "all-tube" amp. It's really powerful and has a good sound.

The amp is very easy to use. The manual is clear and comprehensive. You can get a good sound right away, regardless of the channel you use.

I play a Gibson Les Paul with humbuckers. It's a pity you can't have a clean sound at high volumes because the "classic gain" channel crunches very quickly. Other than that, this amp is excellent. I play mainly blues and rock and this amp sounds really good. I use the ultra gain channel with the gain set between 2 and 3 and it sounds very good. If you increase the gain you'll get a fat distortion right away.


I have a ts9 dx pedal that I use as a booster for certain solos, but it's not really necessary.

I've been using it for a little over three months now and I can't get enough of it. I have a Vox AC15C1 that I hardly ever use since I bought this Marshall. Its 5 watts are more than enough to play at home, while the Vox is more powerful, maybe too powerful for home use. They both sound completely different. The Marshall provides a really fat and good sound right away, while the Vox took me more time to dial in. I also use both of them together with and ABY box and it sounds pretty good, too, plus I can have a clean sound at high volumes.
The 10" speaker makes the sound lack some breadth, but it's quite normal for an amp with such output power.
I tried out a fender blues junior at the same time as this one and it didn't take me long to make my mind up. I was looking for a more distorted sound and this amp really convinced me. I would certainly buy it again if had to.
It's a very particular amp suited for certain music styles. If you want to play blues with a strat and a very clean sound, I don't think it's your best choice.
Did you find this review helpful?yesno
»

The Marshall DSL5C will ship in January 2014

See all 75 photos of Marshall DSL5C »

View all 2 videos of Marshall DSL5C »

Marshall DSL5C manuals and other files