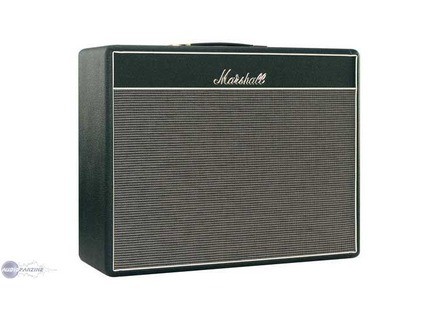 Fred The Shred's review (This content has been automatically translated from French)"Vintage!!"

Marshall 1962 Bluesbreaker
4
Tube amp 45 watt lamps, reissue 1962 by Marshall (ie of 2007), this is the amp qu&#39;utilisait Clapton on "beano" disc with the Bluesbreaker, hence the name. It is also seen on the cover of Still got the blues Gary Moore and regularly toured with him in his 90&#39;s blues period.
So to make it short:
No master volume, two input channels with independent volume (I and II) and for each channel input and a High Low, no reverb and tremolo with two settings (speed and depth) switchable pedal.
So old, if you are looking effects loop, direct output, reverb Acutronic, go your way ... Here we saw in 1962!

The configuration is not as simple as one can believe, in fact I channel is the "bright" channel and II "dark", ie much less brilliant.
Depending on the guitar / pedal that connects, it can be wise to choose one or the other of the input channels and especially low or high, depending on the gain you want to apply to the input of the amp. The color of the obtained varies greatly depending on the input.
Then level setting is very simple, Bass, mid, treble and presence. Amp actually does pretty serious (both hp Celestion green back are certainly something) so we can calm down the bass with the knob "BASS". knobs "medium" and "treble" does not have a huge influence but can help correct some timbre of your guitar.
Against by the presence knob is another story, that&#39;s where we just add the "sparkle" of the amp, its signature sound if you want. on bluesreaker is impresive and very physical (note the ears high level!)
In contrast, the tremolo is dropped, because it sounds bad whatever you do, in addition it is allocated based on dark channel (??) And settings does not affect much the record that is not terrible ...

I already said that, when I bought mine, it was a dream, I got a good deal (800 euro Cygnus), and I brought in a friend who makes maintenance / modification / Creation of tube amp (http://susacustom.com/) who gave me the actual specifications of 1962.
For this is what the scam, Marshall sell this amp as a faithful reissue of the legendary Bluesbreaker 1962 and it is not the same electronic diagram inside the electronic components have nothing to do while Chinese is in there suddenly, out of the box it sounds hard and not very rock&#39;n&#39;roll.
Ten capacitor oiled paper and resistance to the former later and then we can talk ...

The clean sound is legendary, ultra typed is not the Fender is not marshall JCM800/900 etc ... there&#39;s harmonics, we feel the tubes, it is warm and clear at the same time. In short if you like we feast! That is very 60&#39;s (this is for) and it feels even more so when you push the niveau.Mais very careful slap in the pick!
There&#39;s no saturation High Gain, but rather a kind of mushy quiapparait crunch when the amp is almost up and riff reminiscent of "Sunshine of your love" in Cream. we like it or not. I personally am not a fan ...
So yes we can bridge the I channel in the channel II (with a small jack) and push even both channels fully, but it is very quickly muddy and very exploitable.
Not to play saturated with this amp you will have to paste in a pedal buttocks.
I tried with a marshall Guvn&#39;or, 90s (the rig Gary moore priori ...) and yeah it sends not bad but it&#39;s still hard, and not always usable in extreme settings ...
By against good surprise with a good old tube screamer (mine is 1982) there it hard, I never heard my pedal sound like this (I used it to boost for solos so far ...) there actually with Gibson humbucker is easily obtained the sound of "&#39;high voltage&#39; AC / DC (quasi clone" Live Wire "with SG). I got also sounds very close to the "lazy" deep purple album version of "Highway Star" one would believe!
So Rock&#39;n&#39;roll, but before 1977.Après must pass JCM 800

Obviously we can not all play with this amp, but hey, for the old rock&#39;n&#39;roll early seventies (alice cooper, Kiss, etc..), See Soul Motown blues / boogie to Creedance clearwater revival, it is serious !
And frankly amp on which can play everything, it does not exist! ...

I&#39;ve had 3 months, and I tinker for 3 months, I have to find a distortion pedal for the boost well and correctly can be a reverb pedal to the former, because there is really dry, especially with potatoes it is hot to handle.
Good look is beautiful and is sure to not go unnoticed as aesthetically sonically, because the clean sound is really beautiful and so typical!
For group play, the level is just hair cell, because in fact from half the volume the sound becomes dirty but not necessarily more powerful, it is not a 100 watt!

To summarize, I would say that if this is the sound you are looking for, we are ready to make small electronic mods, and we flying hours in rock&#39;n&#39;roll (mastery level / potato, with the mediator and the volume knob) is an amp that gives pleasure! For beginners and against deaf refrain ...

And repet in concert 15 years without worry.
No manual (is it necessary?)

it depends on what you expect but with a good scratch, it feels serious blues!

The sound is ... 62! When I read the criticism of its rustic and lack of versatility, I think that these buyers should not have eyes in front of the holes when they are purchased.

For overdrive I use my ME5 in OD1 mainly with Reverb ... (brief, given that nothing on the amp, I catch the pedal). If you like the bass was low! the knob "Presence" is useful and effective.

I carry around for 15 years together and repet. I say I carry around because it weighs an ass the guy! And not easy to brew for the size.

He did his service, I'm happy (proof, I have not changed since the time), but without passion ... His weight became prohibitive now, then I think to replace it because it is more adapted to our time (since it is 62!). Now, we transplanted the guitars need 100W or more and 35 kilos of this amp.

I would add that even my buddies Hardcore Metalheads love it! Ditto with a good pedal and ESP pickups, this amp does wonders (its heavy, lots of bass, large amplitude ...)

The Quintessence of the Marshall. The "real" the old, not a vulgar formulation.

I am crazy about this amp lamps about 40 watts, 2 channels with non-switchable master volume and no one SETTING THE prsence simply magical ..

There are no sounds the indoor 36. Just one: the holy grail, the ultimate crunch ..

Attention can hurt the ears!

Ds that one branch, a ring. There's no making head at the rglages .. a suggestion, put the bass knob zero, because the amp has low natural Submitted so that you do not need to compensate with legalization.

Great for rock n 'roll burn. Way for the blues despite its name.

He excels in the typical saturation slobbery Marshalls. Think about the sound of AC / DC on their first album "High Voltage".

You can play punk, Hard rock and 70s garage.

Otherwise the amp possde a super clear sound, trs close to a Fender in the dynamics.

There is a tremolo and no Rverb ..

This is the amp I have always wanted. A RVE represents a time machine back to the 60s.

Far more powerful and enjoyable than a Vox.

I Rasht a ds as possible if the silent flight.

Ps: If you have the means, Do not hesitate to Quipp with lamps NOS (New Old Stock: The Mullard, RCA, General Electric and Philips / MINIWATT should do), this amp dj so good becomes better 4X, it's amazing!

goka's review (This content has been automatically translated from French)" such as Téléstrat! to avoid"

Marshall 1962 Bluesbreaker
2
everything has been said
except that this amp is heavy heavy .. pfff
there are what the two HP?? one would have more than enough
at the time they bridging the two channels to gain power, super ... at the time, since I think we have to find other solutions for ca ..

could not be any more basic in the vintage spirit
some appreciate and some do not ..
the sound we like it or not, it's unclear whether particular is a matter of subjectivity
me what I say ok, connoisseurs is good, the general public Fuck, and make no difference, so I think that looks really pro zicos else an amp today ..

nah, I had purchased after advice from a store that would guarantee me that this amp will make money, that's half true, half false ..
what's on it that I never managed to find a sound that my most
then obviously it's unclear whether this particular that many consider the holy grail, I had this impression when selling but that's it! it has everything cqu'il!
it is powerful for sure, but he can not slap him add a pedal that sounds naturally saturated with! I'm not saying they sound it, I say you find that hardly a saturated passing from light to full, as will natural sound clear this amp is specific
you can not play with over 4 without peter ears ..
So far I agree with the opinion of Téléstrat is amp is a marketing coup as marshall do not know what to do ..

Plus ca me of selling galley correctly. Real buyers willing to put more than 750 euros, I have not found .. by fantasmeurs cons of vintage amps, AC ah there was to contact me and tell me waooo I want this amp, I dream night (véridic) but never made the effort to have me take over this price (though he was in good condition ..)
I say was because he finally fell into the bay and I dropped it exchange for a fender hotrod ..
then one hand I am satisfied because the hotrod is nice, true, useful for the Rock and al though I had found my amp in the meantime!
so not really changed since, winning the AC is not easier to sell a hotrod ..
short, all that to say that to stop this type of amp, the vintage is good (I like that) but here it's going too far, it's an amp AC masturbation .. to sound of course but be especially useful! So clumsy amp in every sense of the word!

7 of 17 people found this review helpful

Did you find this review helpful?yesno
»
Read the 6 user reviews on the Marshall 1962 Bluesbreaker »