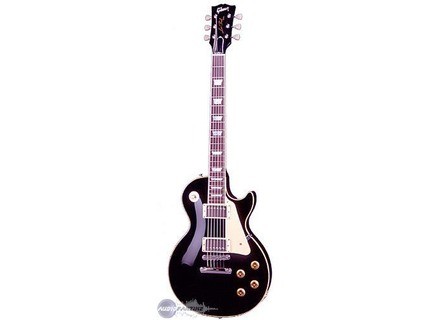 Gibson Les Paul Standard 50's
4
The Gibson Les Paul has been one of the most iconic guitars ever released, and when people generally think of Les Pauls, they imagine this model. It features everything you'd find on a regular Les Paul guitar -- a mahogany body with maple top, set mahogany neck, rosewood fretboard, 22 frets, TOM bridge, pickguard, binding, two volumes, two tones, a three way switch and vintage-looking tuners.

The LP is, despite its problems, a pretty nice guitar. For me, I have a few issues with the guitar such that the guitar is back heavy (meaning the body is very heavy in relation to the neck), the heel can get in the way of soloing and the tuners absolutely suck. Aside from that, they're really good guitars. I especially like the 12'' radius which helps with both action and bending.

I've never been a huge fan of stock Gibson pickups in Les Pauls. Some people love them, but they're not for me. Once they're replaced, I find that Les Pauls tend to sound absolutely huge. However, I also like to go one step further and replace the electronics. These guitars tend to have 330k pots, and I find humbuckers sound best with 500k pots instead. Once that's done, this thing really opens up and breathes fire. The two volume knobs and two tone knobs add tons of versatility, and while the standard three way switch isn't the most versatile in terms of options, it's the most practical in terms of what most people use all the time. These things can really do everything from blues to death metal, and plugging one of these into a Marshall amp is pure bliss.

Quality control on Gibson guitars has been slipping, so I highly recommend playing a bunch until you find the one you like. However, once you find that special one, hold onto it forever as I guarantee it'll sound huge and destroy most of the competition out there. When looking for a Les Paul, pay particular attention to tuning stability and fretwork as those tend to be the two biggest problems.
Did you find this review helpful?yesno
»

garsducalvados's review (This content has been automatically translated from French)

Gibson Les Paul Standard 50's
5
Factory "Made in America" ​​has just Nashville. The model I have is a Gibson Les Paul Standart 2002 with a 50's neck profile (more round than the 60's) Heritage Cherry Sunburst color. The pickups are Burstbucker Pro (Micro included in the range of Les Paul Standart was from 2002 before they taient teams of 490R and 498T. The body is mahogany table with a bomb grade Saddle Flamm AA binding. I bought it new around 2500Euros

As everyone knows the handle of Gibson is not a very comfortable compartment or other stratocaster guitar. It is quite heavy. Access in acute when it is rather difficult of the shape of the guitar (Les Paul type). But against all these dfaults gives SOUND. For me it's really the type of sound I'm looking either to Funk, Rock and reagge for me. The dfaults are quickly forgotten even faster Lorqui has been between the beautiful little fingers ...

For my part I play as I said above the Rock, Funk and reagge, this guitar is perfect in my typre music. I plugged into a Marshall JCM2000 DSL 401. Whether clear or saturated we obtain a good quality sound trs hot hitting, crunch (according to rglages). I love the saturated and clear.

I got the month of February 2005. It took me time to think because 2500euros's still a nice amount but try to force I broke down and I did well because I have no regrets. This is THE guitar I expected. In terms of price quality ratio they are expensive but "OH WHAT IS THE GOOD". If I do it again, I would do the shopping. If you try it DARK do not think.

alexoufr's review (This content has been automatically translated from French)

Everything is fine except the weight of repeated 3h APRS you are tired ...

Excellent nothing to say ...

This guitar is the top of the market ... If you want the sound of the greatest guitarists buy the ... It is aggressive in its clear ..... Especially the branch has a fender amp ..
Did you find this review helpful?yesno
»

philgitaar's review (This content has been automatically translated from French)

Gibson Les Paul Standard 50's
5
I possde a GIBSON LES PAUL STANDARD 2004 colored "vintage sunburst" and equipped with microphones "Burstbucker pro". The handle is of type "50" which is closest to the handle of the original Les Pauls in '58 and '59 Annes.

The quality wood (mahogany neck and body of South American, Canadian table Saddle) helps sustain exceptionel of this guitar, but also makes it quite heavy. This problem is fairly easy ressoudre: just use a belt wide enough and well Molton. My neck, despite Whether it's a '50 MODEL, is not at all heavy and can play fast solo's with no problem. The finish of the guitar is superb.

I possde also a Gibson Les Paul Custom. The distortion of the guitar is trs, trs "fat" and "loud", individualism perfect sound but in concert it's a little lost in the shuffle.
For cons, the Les Paul Standard a micro's (Burstbucker pro) much less powerful than the custom. These are burstbuckers conus to reproduce the sound of Les Paul Standard '58 (so sought-. It is mainly the average frquences dominate (making the sound "nasal", but be careful not to sense pjoratif the term).
In beginners, j'tais a little by his (compare my custom) but as measuring rptitions and concerts, I have learned appreciate it. Indeed, in the tumult gnral group, I finally sound that is present and well Dlimi. The frequencies do not mlangent with bass, vocals & drums. The solo's are distinct while retaining its warm and pleasant! The microphone allows a less powerful as his bluesy, jazzy and the (hard) rock, just push the gain of the amp a little further.
The clean is clean and friendly.
INFINITE SUSTAIN AND IS !!!!!!

Well, I play again rock hard (70s and 80s). This guitar is idalie for me. I could do without (it is CHRE, but I do not regret this purchase)
The combination "Gibson" and "marshall lamp" is perfect, I play on two TSL 100 in Stereo and the power of this set gives you a real "kick". It's not for nothing that great guitarists use this combination (Gary Moore, Angus Young, Slash, Jimmy Page, ... and many others).
I had Fenders, Ibanez, Music Man, Epiphone and others, but nothing beats the Les Paul Standard (my opinion )!!!!

Did you find this review helpful?yesno
»
Read the 6 user reviews on the Gibson Les Paul Standard 50's »