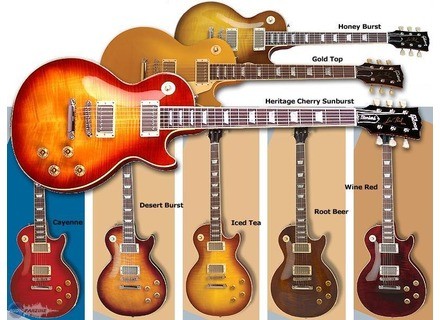 Gibson Les Paul Standard 50
5
The Gibson Les Paul is a great guitar that has a great feeling and just an absolute iconic look. So Mini guitar makers and manufactures today have taken what Les Paul did back in the 50s and use it as their influence to build their modern guitars. So many guitar makers just flat out copy these guitars because are so widely used in extremely versatile. These are the kind guitars I discussed it in pretty much any style of music out there. They're very transcendent and they have just a great voice and tone and overall feel for any guitar player out there. They have a good way to them if you like a heavy thick mahogany guitar. They're going to be very warm and very soothing when you have a good overdriving amplifier . These are such beautiful feeling and sounding guitars.

These are the kind of guitars that you wish you could start it out playing the guitar with. If you were lucky enough to have a Gibson Les Paul when you first started the guitar chances are you're probably still playing the electric guitar. Anyone who got the opportunity to pick up this kind of guitar when they first started playing probably had the right element in the right tools to use to help get them going in their guitar playing career. And if you didn't continue that career then shame on you because this is a great guitar. Overall the feeling and tone of this guitar is unmatched in any area.

They are very easy to dial in and you have two volume control knobs into tone control knobs. You also have a pick up selector that will allow you to pick up a bridge pick up for the neck pick up. This is a pretty easy guitar to figure out and you just basically turn your tone control knobs all the way up and you turn your volume controls all the way up. If you want to get the sound of switching a guitar on and off then you would turn the neck pick up volume down all the way and use your click pick up selector to flick it up and down to get a cool jolting type of sound. Van Halen also used a Gibson Les Paul to get some of his recording tones. If you've ever heard the song hot for teacher then you know that the intro was played problem on a Gibson Les Paul and using the two pick ups and rolling the volume control knob down to get a clean town and having the other control all the way up. See you get over driving test. This was good when Eddie Van Halen used to switch quickly from a clean too hot rotted overdriven distortion tone.

These guitars match very well with the Marshall amplifier. It's like that you were made for each other even know they were built on different continents. They have a great chemistry and by far have the best sound in buying any guitar to any guitar amplifier. Again this is my opinion and I generally lean towards hard rock and metal tones so the mix between a Gibson Les Paul and Marshall amplifier is really right up my alley.


I highly recommend this guitar to anyone looking to step up to one of the best guitars ever been created. It has a great feeling a great tone that matches pretty much any style of music. It's good to be a warm and sick fat sounding tone that will get you a great classic rock tone and modern rock tone. You can find these guitars pretty easily on the used market so I would go there first if you're on a budget.

Gibson Les Paul Standard 50
4
There are generally two different Standards out there in terms of neck profiles -- the 50 and the 60. The 50 is the larger of the two, and some people tend to feel there is a tonal difference because of the extra wood. The guitar features a mahogany body with a maple top, mahogany neck with a rosewood fretboard, 22 frets, trapezoid inlays, pickguard, binding, hard tail bridge, two humbuckers, two volumes, two tones and a three way switch.

The aftermarket pickups that were installed in this really made the guitar that much better. I'm not a huge fan of the stock Gibson pickups, and those Duncans are some of my persona favorites. If you're in the market for one of these, be sure to check it thoroughly for QC issues as that'll be its biggest downfall. They generally all sound good, though.

Garcymoore's review (This content has been automatically translated from French)" The best guitar in the world ... or not"

The handle is very nice when you get used to.
Weight, you get used to.
Access to acute is not easier but it's still acceptable. The beauty of the guitar more than justifies this small effort.
Gets it easy to sound good? I hope you're joking!

It is suitable for all styles of music except maybe the funk but it's still possible. After it is mostly a matter of taste. The Les Paul is the fat sound.
The pickups are very important, but what struck me was the first time, this is the sound balance, all frequencies are parts, which is surprising because the Les Paul is best known for its crunch and midrange tape has the eye. The "percussive" appearance as with the rather massive body. Large natural bass and crisp highs mediums quite unlike the present strat which is carved into the midrange (I say may be bullshit but it ' is felt).
I play a Marshall.
I find it pathetic that make the big metal with this guitar (and I love the Metal).

What's more, that has not already been said about this absolute legend amplified music.
Still need to find the right one!
All Les Paul is not the same and always eventually find one that will make the difference.
Of course a Les Paul will be the grain of a Les Paul but some have a little something extra, a personality, a life.
Mine disappoints me a little, it lacks character. I know this is what I want but I'm still looking MA Les Paul. On the whole I am satisfied of course, I have the grain, but it is I did all that, it does nothing, like wow! (For my Marshall against him, it compensates)
What I like least: the lifts.
The quality / price? As I often say, compare the price of a high end guitar with the price of any used car and you have my opinion on the matter. Guitars, it's cheap. There are some who start a credit of 10 years for a class car, it is a choice.
And as my grandfather: "Dude, it's better."