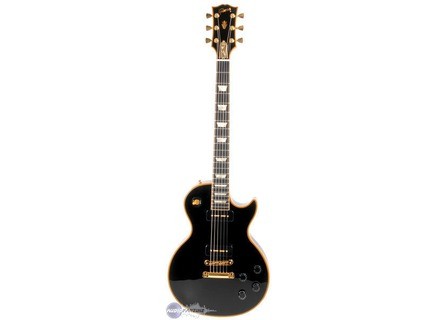 Gibson Les Paul Classic Custom P90
4
This is the P90 model of the Classic Custom. It has all the great features that the old school P90 Customs had from way back when, but it's at a much more affordable price, I've found. These generally go for a good bit less than the normal Customs. The guitar features a mahogany body with a maple top, mahogany neck with an ebony fretboard, 22 frets, trapezoid inlays, pickguard, binding, hard tail bridge, two humbuckers, two volumes, two tones and a three way switch.

The P90s in this are a little brighter than some of the other P90 models that Gibson offers, and this is mainly due to the ebony fretboard on this guitar. The ebony adds some extra treble and cut to the guitar that it wouldn't otherwise have. The bridge in this is great for a hard rock tone, and if you roll down the volume + tone knobs, you can get a sick blues tone. The neck is the same in that it can deliver some great lead tones and strong clean tones, but I find that it can get a bit bright, and I find myself wishing it had a bit more overall power in the neck.

The guitar sounds a little brighter thanks to its ebony fretboard, so if you find that the normal P90 versions of Gibsons tend to be a bit too thick, you'll want to check out this model. It should be perfect for you. If you found P90s to be bright, you'll probably want to look elsewhere as the ebony won't be doing you any favors in that respect. The guitars are good, and you can find some good deals on them on forums if you search around.

frednicol's review (This content has been automatically translated from French)

<p class="MsoNormal"> It combines a custom blend of classic and its a great les paul caractristiques par excellence ..


<p class="MsoNormal"> It is what lon nome at Gibson, a guitar of the week it is actually produced was only <span> </span> 400 copies in the world .. It dates from 2007 so the only way to have a den cest loccasion if the market was very lucky.

<p class="MsoNormal"> It is rather funky Motown that even if we find the legendary P90 it does not slam like a fender .. But hey .. It's the sound that Gibson found on numerous recordings also ..

<p class="MsoNormal"> The handle is magic you can play without problem the strings very close to the race .. we walk without drooling .. .. delightfully

<p class="MsoNormal"> Newfoundland in 2007, and was trading at around 2300euros; cest great art, the price is justified, but in Gibson, even on models 3500euros nut is sometimes poorly done, for consquent enclosing the strings a bit it tends to do the guitar dsaccorde; must rework or replace the pice, cest Nerva, but its not good the nut serious ..

The downside to varnish and nitro fragile but given the weight
excellence in the choice of wood is normal ..

Nacres decorative tan are beautiful .. I have rarely seen it ..