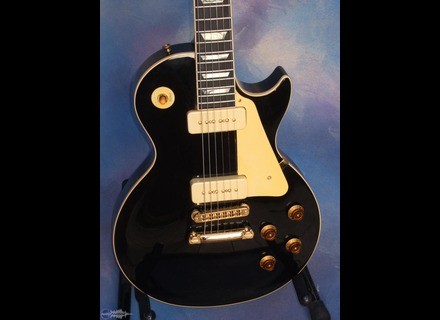 Gibson Les Paul 40th anniversary
4
For Gibson's 40th Anniversary, they wanted to go back in time and show the world what made them famous in the first place. The main thing they did was create an old school Custom but with the updated bridges that they use in today's guitars. The guitar features a mahogany body with a maple top, mahogany neck with an ebony fretboard, 22 frets, trapezoid inlays, pickguard, binding, hard tail bridge, two P90s, two volumes, two tones and a three way switch.

This is an old school guitar in almost every sense of the word. The finish on this reminds me of the old school Model T Fords. You have black, and that's about it. I don't think these came in any other color, although feel free to correct me if I'm wrong. The neck on this is very huge, so if you're not a fan of big necks, you'll want to stay away from this. The ebony felt great, and it made it look a lot more elegant than the regular rosewood fretboard. The frets were in good condition, and there were no issues with the nut. The biggest thing about this was the pitting on the gold hardware.

The P90s in this thing were absolutely amazing. They sound a lot like a really fat single coil and don't have that nasty treble that single coils can sometimes have. They also sound a lot more "3D" than normal single coils. The bridge is awesome once you start cranking up an old school Marshall. It just screams to be played hard. The neck delivers that awesome "tubey/vowely" kinda sound that is just heaven. These pickups aren't for metal, so don't expect to deliver some ultra tight triplet riffs with these. However, they're awesome for blues and rock.

These guitars can be a bit pricey at times, but you can sometimes find a good deal on them. Be sure to check out a lot of Gibson oriented forums if you're looking for one of these. eBay has a lot of fakes, so be careful on there. You might need to do some minor work to it like a fret level and install a new nut, but they should be pretty good out of the box.
Did you find this review helpful?yesno
»