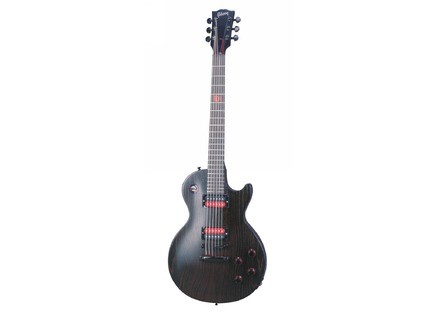 Gibson Voodoo Les Paul
5
I stumbled across a picture of this guitar on the Gibson website and thought, "Wow. That's a spooky looking thing, innit?" I tracked one down at Guitars Etc in Tucson, AZ, plugged it in for about twelve seconds, and suddenly found my bank account $1250 lighter. I probably would have paid more if I had to.

It's a Les Paul. A scary Les Paul. This thing plays GREAT-- it ships with 10s on it, but they feel like 9s. The sound is vintage Les Paul, but hopped-up a bit. Very crunchy on the bridge pickup, very smooth at the neck. But the look and feel of the swamp ash body are what set this guitar apart. Menacing beauty and killer tone. What more could you want? How about a red voodoo skull inlay at the 5th fret? Yeeeeah.

Well this isn't something *I* don't like, but it may be something *you* don't like: This model only ships with the "fat" 50's style neck... don't go looking for a 60's slim taper on your Voodoo, cuz you ain't gonna find it. As for what I personally don't like about it... ummm... it's sort of heavy? That's the best I've got.

Gibson USA = Quality. I could probably smash a teevee with this thing and it not only wouldn't be wounded, but wouldn't be out of tune, either. Hardware is all top-of-the-line stuff. The case is sturdy enough, and well padded inside with plenty of fuzz.

If angrydrunk Joe Perry and undead Jimi Hendrix got together on a Mardi Gras midnight in the living room of some fully-engulfed-and-burning-down-around-them mansion intending to design a mood-appropriate guitar, this is the one they'd come up with (although Jimi'd probably fight for a Voodoo Strat). It's a bold take on the Les Paul-- definitely radical and not for everyone. But if you dig the look, the rest is pure Gibson magic... errrrr, Voodoo.

The handle is quite enjoyable though dernires Access in three boxes is not super easy.
Ergonomic issues and much that is heavy enough so Les Paul (but when even one kilo less than the other models thanks to the body which is more lightweight frne) is a guitar trs enjoyable playing conditions to keep it pretty low if it was not the hand well down on the bridge.
The sound as it poustouflant, the output level is quite lv but still allows same superb sound hot but clear, crunch sounds are incisive and the sustain is tireless in heavy saturation.
I put 8 because of the experience for me coming to a stratovolcano ...

I play Rock, Hard Rock and also death metal but I do not mind playing the Blues, this guitar lends itself all these styles without any problem, I just had a little trouble finding an enjoyable position for attacks tremolo black / death metal.
The sound has nothing do with my team a strato Seymour Duncan Screamin Deamon is the queen of versatility, but I manage to find a aisment rglage fits all style.
Many people tell me that this guitar is made ​​for the mtal but this is absolutely not true, it is versatile trs though more geared for heavy distortion or the crunch gers.
Strengths: its heat, power and sustain.

I bought it there a little over a month in the United States so I paid much less than in France and even in Germany but frankly, I would do this purchase m me for the price displayed in Europe
It is both trs trs diffrent and close to a Les Paul Standard: This is a Les Paul but modern.
I have the choice because it is the only Les Paul that has less than 2500 in the key bne black finish and the rib I cracked ...
I do not regret choosing this MODEL is so original and both trs go anywhere ...