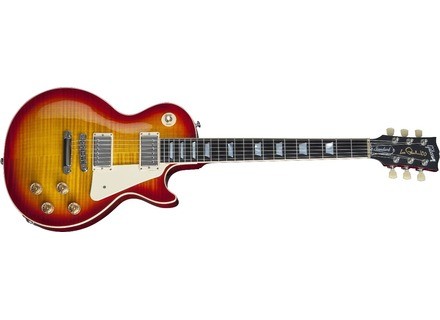 Gibson Les Paul Standard 2015
5
HOW I USE IT : essentially on a Roland Cube 80 amp for genres ranging from blues-rock to jazz through fusion. In all cases, I use a light to very light distortion, a little reverb and sometimes chorus. A few weeks ago, I started to use it with flat top strings.

INSTRUMENT QUALITY : In spite of all the nostalgic stuff you can read these days about Gibson's current production, I find it really beautiful. Its top and fingerboard are great, the electronics is trustworthy, the neck is nice to be played. The light body is a great idea to my taste as the instrument is heavy enough already. I like the double/single coil switch featured on this model. I also appreciate that the pickguard is not default on this model - it avoids holes being there when you don't want to use one to take full advantage of the top.

SOUNDWISE : A mellow and warm sound, really full of harmonics in the mids with a long, long sustain. This is what Gibson's reputation was built on, and to my taste it remains unique to this day. Other brands provide LP-inspired models, but none really approach that one sound. This alone justifies buying it. But this sound also has backdraws though, with a lack of high harmonics which makes it necessary to choose your amp very carefully.

Cons : high notes acces (there are not many doublecut models around), and of course its price.

Pros : its sound -well, I meant THE ONE sound-, and the aesthetics.

Since I'm more and more attracted to jazz, perhaps I'd reconsider my choice as to the model if it were to be made again, but the Gibson brand still remains a must have and I'd certainly hesitate with an ES335 (which is even more expensive!). Still, even for jazz which ain't its natural playground, the LP is mighty.
Did you find this review helpful?yesno
»