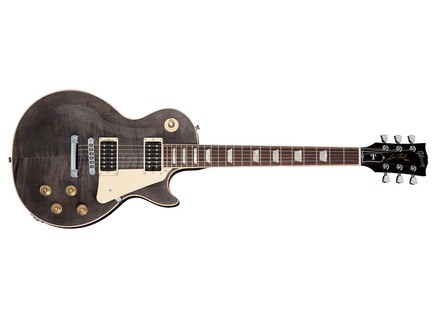 Gibson Les Paul Signature T w/ Min-ETune
5
Manufacturing USA, it is between the traditional and standard.
In fact it is a tradional with a slightly less but dug dug still the standard body. The pickups are those of the trad (classic 57) and the handle is the std (60 s).
It also has splitables knobs to move in double single coils and of course the automatic tuning with 12 pre tuning and 6 to customize.
AA finish

Difficult access to the first acute use (before I played on Jackson 24 cases ...) but after two months it fits ...
System min-anda beautiful. It should be noted, however, that when the guitar is new, it does not take much tuning due to the saddle not "broken." This inconvenience disappears completely after 6 months if you play regularly. I heard a lot of criticism on the side of the gadget min-anda. It is hollowing out that if you buy it to play all the time in Mi it does not make much sense ... To me that makes a lot of times and sometimes detonates the pieces to adapt to the singer, it's just beautiful. The system between 5 and 8s to change tona.
This min-anda allows me to play in concert on 6 different tones (E, Eb, D, DADGAD, Drop C and F) while keeping my Les Paul! this is the top.
In terms of splits, I do not use ... matter of taste!
For overweight, it is quite reasonable, I'm not a wardrobe and I support 3h on the back poses with a 10mn without problems.
The handle is nice, I've tried 2 other types (50 and 60), the 60 was a little more likely familiar because I was playing on extra sleeves for type "highway" before. But I would also fit me at 50 ... Brief important to me not.

I am not 10 because the lack of precision tuning at the beginning I was very upset: (Gibson could have predicted ...

Level, it has a less modern side as the std giving it (for my taste of course) more finesse and feeling better felt on Cruchy and bluesy songs. If you want a less authentic and more modern sound, turn to the std or custom. My style is oriented Gary M, Bonamassa, Guns, Aerosmith.

I always dream of this guitar is now home on the wall!
I played for seven months with a Marshall JVM 410, the sound can be as raw and powerful on the AC-DC or sweet, creamy and full of warmth on a blues improvisation. I use many automatic tuning (which does not affect the sound of the guitar) and it is clear that without this system there are many times that I could not play (SOAD, Led Zep with Kashmir Guns or Extreme Eb ...) he even avoids me songs with capos first fret tuning thanks to "users".
What I like least because it must be a little critical still is the access to acute. But hey, this is a LP, we can not have it either.

Published on 11/28/12
Gibson has dubbed 2013 "Year of Les Paul," and as part of the celebration has released details on the new Les Paul Signature "T".