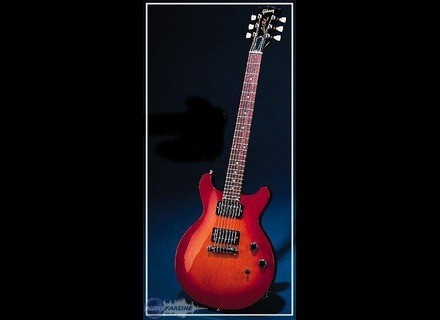 Gibson Les Paul Studio DC
5
I bought this guitar at Mars Music. They were having this insane special on it, discounted from about $1400 to $700. It was the most beautiful guitar I'd ever seen, so I couldn't pass it up.

There is everything to like about this guitar. It plays like a dream (in other words, like any real Les Paul). The sound is clear and beautiful, and goes well with any effects or rig you want. Fulfilling the mission of the ideal guitar that the LP was designed to be, it is excellent for any sound, from clean to thick and crunchy. This guitar provides everything that any Les Paul can, with a slim, comfortable neck and a body that's sturdy but incredibly light, and (I think) it has the added bonus of looking better than the normal Les Paul (looks like any Les Paul Junior, which are pretty widespread in availability). Everyone that has ever played it has told me it is beautiful and sounds amazing.

The only thing I would change about this guitar, and it's very, very minor, is that I wish it was available with a moveable bridge so that I could use a whammy bar.

The construction of this guitar is top-notch. I have had this guitar for 2 and a half years and have played it into the ground, yet it still plays like I bought it yesterday and has held up as good as anything.

As great as this guitar is, I read somewhere that the specific model was discontinued, but if you can find this anywhere it is an amazing buy. I would give it 10 stars if I could.

gregzerozero's review (This content has been automatically translated from French)" Wawwww, how it is rated so low as ca ___"

Gibson Les Paul Studio DC
5
Les Paul shape with a few modifications, DC (double cut)
Made in USA
24 frets
2 humbucker
1 volume, 1 tone
Mine is dark green at the beginning I did not like but you get used
Characteristic of this model: a semiconductor body dug

is incomprehensible that this is not one of Gibson's most popular because:

The neck is super nice, nothing to do with the trunk of Les Paul Classic is a much more flat and round end (I think he calls slim AC tape but without certainty)

The box is really eased thanks to its cavities (3.4 kg for mine), it vibrates wonderfully.

The sound is really very close to a Les paul normal part she has a little more, like the ES, less fat

A bomb .... Typical Gibson sound but the lightness and more.

Good as it is on the super clean and flashy it is better to take no Fender, but it's not what I wanted. I wanted a powerful and melodic at the same time, capable of distortion but still clear and I found it. All the things lacking in traditional Les Paul, that they possess the
I play either directly connected to the amp, or I go through a multi effects Boss ME25. Either a Fender or a Champion600 Electro Harmonix Magnum44 coming out on 2x12 Marshall

Before you have it, I already had a bunch of mid-range guitar, Fender Tele Standard Tele Baja Jackson Performer Series 3 Charvel and a Gibson Les Paul Studio Black had belonged to Gary Moore (won in a contest) ...
The one I liked least was the Les Paul as too heavy, its too fatty, not enough melody ... I preferring to brief the Fender with maple fingerboard. Then I put in a rock band, true rock and it needed a humbucker sound, and I came across this Gibson DC I do not know and since I'm in love.
What I like least is the finish of the guitar but it's a good studio.

The price is OCCAZ vraient ridiculous given the guitar, from 200 to 400 below as they traditional have additional arguments (24 stick slim type, lightweight body). The only thing apart from a series Deluxe that came out in 2000 that is overpriced is that the colors are bof: dark green, dark burgundy, black or sunburst pretty ugly, that's all that was available I think.

Gibson Les Paul Studio DC
5
Model fairly rare, especially in "Studio", it differs from Les Paul Standard
by many points:
Double cutaway asymmetrical (as Les Paul Special) but a table with carved maple.
Channel 24 frets, joining the 22nd, profile rather similar to that of a round of SG.
Beveled mahogany body, 490 microphones close to each other.
2 knobs only (enough) and toggle-switch next to that tone.
Wrap-around bridge, no tailpiece (Model specific Studio).
No pickguard (the better).
Made in USA everyone had guessed!
The pickups are 490 with chrome covers and mechanical "green keys"
Key benchmarks are simple points. In summary, a guitar very simple but very beautiful.


It is lighter than a Les Paul standard and very balanced.
The ergonomics are beyond reproach, the handle of the 24 cases not only failed, only the toggle is a bit far, it would be better between the 2 knobs.

The sound is less greasy than a Les Paul Studio with the same microphones, this is because of lower volume of timber, somewhat reducing the sustain, the position of the handle almost entirely out body and microphones close together, the bridge pickup is only usable on a Les Paul "normal".
This guitar is very good for blues or jazz, it accepts the effects very well and folds to a lot of styles (except Rn'R and country) it is easy to play and very fair under the simplified acute despite his easel.

A real Gibson, with a personality of the rarer it is (made from 97 to 99), especially in this version, I've never seen another.
If you find one, buy it.